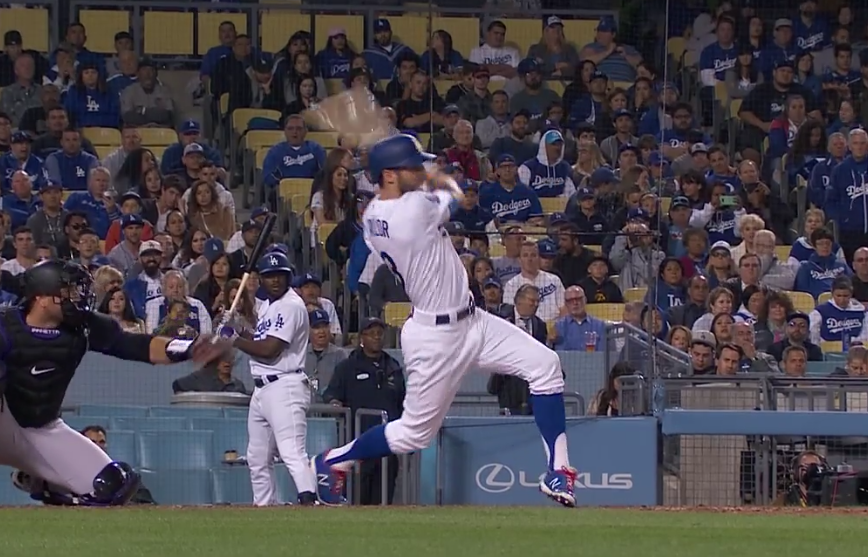 After dropping a frustratingly winnable game yesterday in the series opener, the Dodgers and Rockies were back at it again, and at least ESPN was miserable because the pitching matchup was Brock Stewart and Chad Bettis. Thankfully the Dodgers managed to get back in the win column tonight thanks to one crooked number and quality pen work to take it 5-3.

The bats got off to a quick start for once, as Justin Turner hit a one-out double and Matt Kemp hit a two-out single to plate him for a 1-0 lead in the 1st.

Cody Bellinger immediately followed by doubling, and the Dodgers eventually forced in a run after back-to-back walks to Chris Taylor and then Yasiel Puig to make it 2-0.

On the other side of things, Brock Brock gave back the lead by allowing a homer to Ian Desmond in the 2nd and three consecutive two-out singles to score a run in the 3rd. He ended up lasting just four innings and 63 pitches before being replaced by a pinch-hitter. He allowed five hits and one walk in his outing, striking out just one batter. He looked … passable, but there has to be some concern that a guy who used to sit 92-94 mph is now more 90-91 mph.

That brought on the pen, and Erik Goeddel was the first man up. Thankfully, he’s continued to look like a solid middle reliever, getting a 1-2-3 inning on 11 pitches in the 5th. The trouble came in the 6th after JT Chargois walked the Trevor Story to start the frame. Story then stole second and advanced to third on a passed ball, eventually scoring on an Desmond single that likely would’ve been an out if the infield was back. Chargois did strike out the side, but the Dodgers were still down 3-2 in the end.

Thankfully, the offense pulled their heads out of their asses in the 6th. After going 0-for-12 with a walk since the 1st, Kemp started things with a single and later Taylor smashed a hanger for a go-ahead two-run shot.

Better yet, Puig made it a three-spot after he too crushed a hanger to make it 5-3.

Following that, Puig and Turner Ward continued their relationship.

Perhaps most importantly, the bullpen shut it down from there. Tony Cingrani finally looked something like his early season self in a 1-2-3 inning with a strikeout in the 7th, and Josh Fields did the same in the 8th and is now sitting 94-96 mph again.

That left it to Kenley Jansen in the 9th, who certainly struggled a bit for his standards. He got an out on a liner to start things thanks to a diving play by CT3 at short, then gave up a double to get in trouble, but shut the door by inducing a weak grounder and then notched a strikeout on a 94 mph cutter at the top of the zone.

The Dodgers get back to six games under .500 at 21-27 overall, and they are now hilariously 4.5 games back of the Rockies in the NL West.