The strongest stretch of the season for the Dodgers hit a small bump last night, as they were out-slugged by Christian Villanueva and the Padres. Alex Wood had given up four homers all season, and proceeded to give up three over five innings — can’t win them all. The Dodgers (23-28) remain 3.5 games out of first, but their play as of late is likely indicative that they’ll be close to .500 sooner rather than later. Even with a six game losing streak mixed in, they’ve gone 11-11 over their last 22. It’s not great, but it’s better. The Dodgers send Walker Buehler (2.38 ERA/2.32 FIP/3.42 DRA) against Matt Strahm (4.91/7.33/9.41) in the rubber game, with the Dodgers looking for their third consecutive series win.

Enrique Hernandez and Yasiel Puig are both back in the lineup against the left-handed Strahm, replacing Max Muncy and Joc Pederson from yesterday. Chris Taylor has been excellent as of late, slashing .289/.449/.553 since 5/12. Over that stretch, he’s posted the 16th highest OPS (1.002), and the 13th highest wRC+ (181). He’s been striking out less, and walking more over that same stretch with nine walks and only nine strikeouts. Chris Taylor good.

There have been 126 starting pitchers who’ve logged 34 or more innings this year, but Strahm has only pitched 7.1 innings and all of them have been out of the bullpen. I’ll throw his numbers in there for fun, but it’s been such a small sample that it doesn’t show much besides that he’s been bad so far. 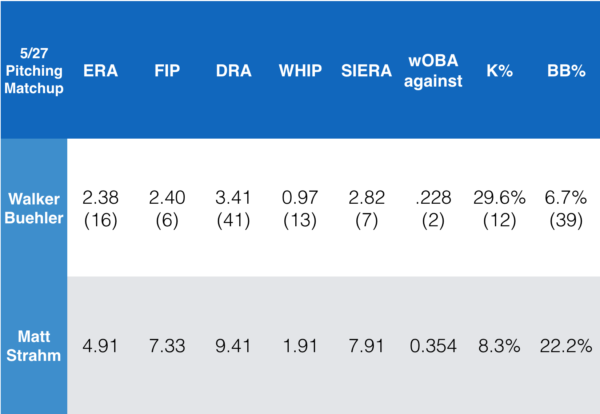 Buehler has made six starts on the year, and over his first three his command was the only real concern. He wasn’t allowing any worthwhile contact, but any trouble he ran into was due to spotty command putting runners on. In his first three starts, Buehler had an elite 30.2% strikeout rate, but an 11.1% walk rate. However, over his last three starts Buehler has continued striking out batters at a strong rate of 29.2%, but cut the walk rate down to an insane 2.8%. His overall 6.7% walk rate is well below the league-average of 8.5%, and he grades out as a premium starting pitcher in almost all other categories as well. Buehler looks to continue his excellent 2018 season against a mediocre Padres offense.

Strahm on the other hand, is a 26 year-old left-handed reliever who will be leading a bullpen start for the Padres. He’s been considered a top prospect as recently as last year, ranking highly in both the Royals and Padres systems before exhausting his rookie eligibility in 2017. There’s not much for me to say about him that Eric Longenhagen of FanGraphs hasn’t already said.

“At times he’ll touch 96 with his fastball and sit 93-94; he’s been 89-92, touching 94 at others, though. He works with multiple breaking balls — a mid-80s slider and a more vertically oriented curveball that sits 77-81 — generating in excess of 3000 rpms at times, and they’re both lethal when Strahm is locating them…If Strahm’s fastball plays at the top of his velocity range in relief he could be a dominant reliever.” 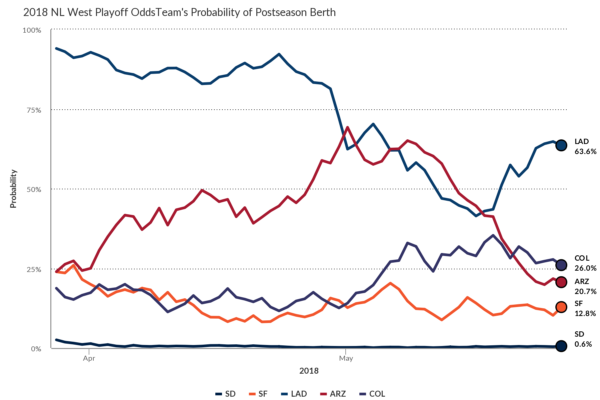 It’s more indicative of the rest of the division than the Dodgers seriously improving (although that has happened too), but the FanGraphs playoff odds now strongly prefer the Dodgers. Their odds to make the playoffs are up to 63.6% vs. Colorado’s 26.0%, and their odds to win the division are up to 57.0% vs. 19.3% for Colorado.

This is great to hear, and the best part is that Clayton Kershaw gets to return at home, instead of this coming weekend in Colorado at Devil Field.

Just a guy living in Southern California, having a good time writing about baseball. Hated baseball practice as a kid, but writing about it rules. Thanks for reading!
@AllanYamashige
Previous Padres 7, Dodgers 5: Wood can’t hold leads and pen gives it up late
Next Dodgers 6, Padres 1: Buehler’s dominance plus 8th inning dongs give LA 3rd straight series win