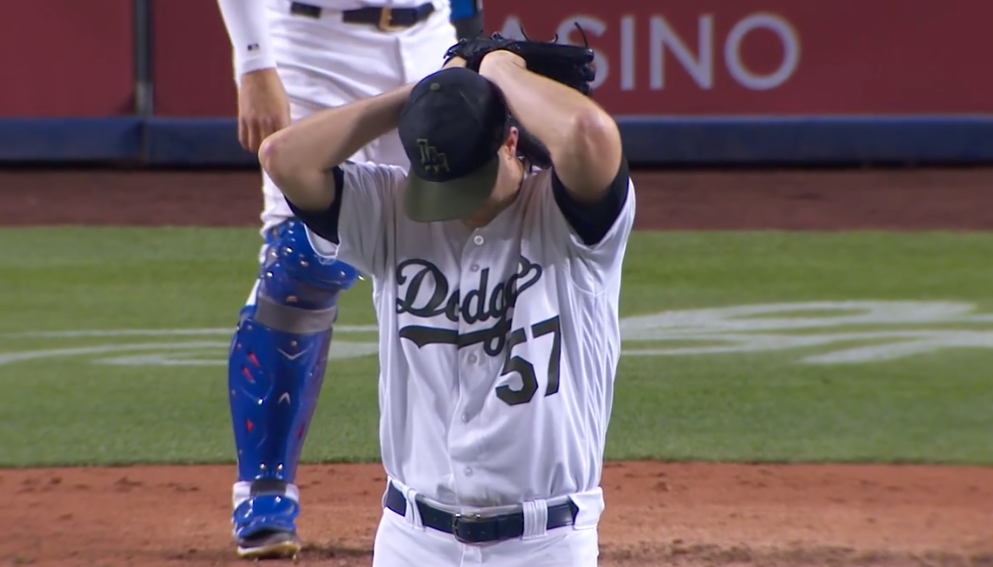 Immediately after losing 9 of 10, the Dodgers have rebounded to win 7 of 8, thus getting themselves back into the NL West picture. Tonight they looked to take the series over the Padres, but they simply could not hold on to any leads and eventually fell behind for good in the 7th in a 7-5 loss.

Chris Taylor got things started offensively for the Dodgers in the 1st when he crushed the second pitch of the game from Jordan Lyles for a homer to left and a 1-0 lead.

Unfortunately, Alex Wood gave it right back in the 2nd, as he walked Franmil Reyes with one out and then gave up a dong to Freddy Galvis of all people to put the Padres up 2-1.

After a brief run of quiet, the Dodgers put up a crooked number in the 4th. Justin Turner started the inning by tying the game with a solo shot, his first dong of the year.

Matt Kemp then singled and Yasmani Grandal followed by singling off the wall in right (yes, he is slow) to put runners on the corners. Cody Bellinger‘s squibber back to the pitcher resulted in an out but advanced Grandal to second, and a Logan Forsythe single led to he Dodgers taking the lead, 3-2.

Joc Pederson seemingly followed with a single of his own but was robbed on a diving play. However, a run at least scored on the play to up the lead to 4-2.

The Padres continued to fight back, however, as A.J. Ellis started the 5th with a homer that cut the lead to 4-3 and made scoring look like a sinch. Wood then allowed a double and seemed to be in trouble after a bunt advanced a runner to third. However, after a fly ball was hit to left, he would get out of it with a double play thanks to a stellar Pederson throw.

The Dodgers responded in their half of the 5th, as a single and two walks lead to the bases loaded with one out. Bellinger then managed to draw a walk to force a run home and make it 5-3, but Forsythe struck out and the Dodgers couldn’t get any more.

That immediately cost them, as a single and then a homer from Christian Villanueva led to a tie game at 5-5 and knocked Wood out of the game. Wood threw just 79 pitches across 5.1 innings, struck out seven, and allowed just six hits and a walk. However, he gave up three homers and all five runs he allowed came on those homers.

Pedro Baez managed to get the rest of the 6th, inducing two fly balls. Daniel Hudson then got two outs in the 7th but gave up an infield single and was replaced by Scott Alexander. He started inauspiciously as he hit a batter, and then gave up a grounded single to center to give the Padres a 6-5 lead before managing to escape the inning. That brought on the Human Dinger Machine in the 8th, and on the first pitch Josh Fields threw, he gave up a dinger to Villanueva to make it 7-5. He faced the minimum the rest of the inning, but the damage was done. Erik Goeddel got the 9th and gave up one walk, one intentional walk, and a bunt single to load the bases, but he managed to escape without further damage being done.

The offense wasn’t at fault for what happened today, but it certainly didn’t help matters that after the 5th inning they managed just one hit and one walk. While I’d like to say that one loss doesn’t matter, they dug themselves such a deep hole that it feels like they have to get games like today.

The loss drops the Dodgers to 23-28 overall and 11-15 at home, both of which are still seriously shit. The only saving grace is the Rockies also lost, which means they are still 3.5 games back in the NL West.