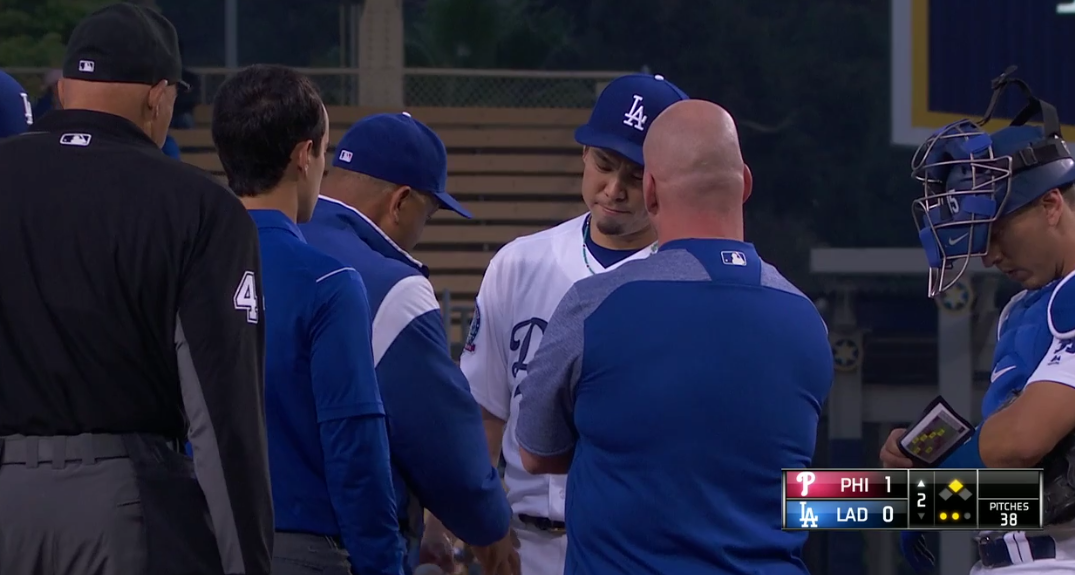 The Dodgers entered today with a chance to get to two games below .500 for the first time since May 4, but they faced a tough task in Jake Arrieta. That quickly got a lot tougher when Kenta Maeda left in the second inning with an injury, which thankfully doesn’t appear to be that serious, but after that they rather predictably fell 6-1 to the Phillies.

Maeda will be the story here, as he hadn’t given up a run for two starts in a row coming into tonight. That didn’t hold up tonight, as he got just five outs and gave up two runs on a walk and three hits, including a homer. However, after 35 pitches he got a visit from the trainer and Dave Roberts for a potential injury, and after 38 pitches he was done for the day.

Kenta Maeda was removed from the game with a right hip strain.

No word on the severity yet, but that’s definitely preferable to an arm injury.

Anyway, so that left the pen to get 22 outs, which is less than ideal. For the most part, they did alright. Scott Alexander gave up a run in 1.1 innings and Pedro Baez gave up one of his own in his inning, but Erik Goeddel, Tony Cingrani, and Josh Fields came up with a scoreless frame each. Tasked with the final two innings, Daniel Hudson had trouble. After a scoreless 8th, he was lucky to give up just two runs in the 9th, runs which basically put the game away for good.

Offensively, while they managed two walks and nine hits, they grounded into two double plays to reduce the chances for scoring and didn’t do much with the opportunities they did have. The Dodgers did manage to avoid the shutout in the 8th after a Max Muncy double and a Justin Turner single, but that was it.

The Dodgers drop to 25-29 with the loss and 13-16 at Dodger Stadium, and stating that after every game reminds us of how far they have to go despite the progress. The Rockies clobbered the Giants today, which means the Dodgers are now 4.5 games back in the NL West.