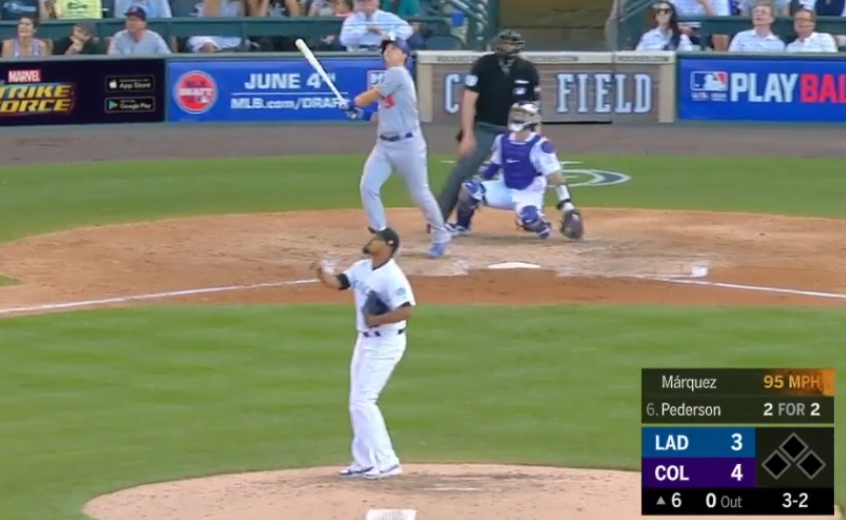 After a wild back-and-forth affair yesterday, the Dodgers and Rockies looked to be headed in that direction again early in today’s game. However, a massive 7th inning rally made it so that even the Dodgers bullpen at Coors Field couldn’t blow it and they prevailed easy, 12-4.

Walker Buehler didn’t have his best day on the mound, which isn’t exactly a rarity at Coors Fields. However, to his credit, he battled and got innings for the Dodgers when he could’ve caved. He was in trouble since the 1st, when there were runners on first and third with one down, but he escaped thanks to a double play after Matt Kemp showed off his arm.

At least the venue seems to be helping the offense, as Kemp started the 2nd with a single. After a fly out, Joc Pederson doubled, and a run scored when Yasiel Puig got sawed off on a grounder to short. Breyvic Valera then stepped up and singled to right to plate another run and make it 2-0.

Buehler then gave it right back in the Rockies half of the 2nd, as four singles, a double, and a walk plated four runs. While he had ample chances to get out of the frame, probably three of hits were more unfortunate than anything, but it was 4-2 nevertheless.

Joc got one back in a hurry with a homer in the 4th to cut the lead to one, and he later tied the game in the 6th with another homer.

That held up until the 7th, when the bats put up an eight spot. Chris Taylor started the rally with a single and advanced to second on a wild pitch, then a Justin Turner single put runners on the corners with nobody out. The Dodgers took a 5-4 lead when Yasmani Grandal hit a grounder to second, and then added to it when Kemp followed with a two-run shot to left.

Much to the dismay of Steve Lyons, the rally started again with a Cody Bellinger walk, Joc single, and Puig walk to load the bases with still one down. Breyvic then hit a ball hard back up the middle past the drawn-in infield for a single to drive in two and make it 9-4.

After Enrique Hernandez drew a walk, another run scored on a wild pitch, and Taylor capped off the scoring by smashing a triple into the left-center field gap to make it 12-4.

Oh right, back to the pitching staff, who actually didn’t allow a run after the four in the 2nd. Buehler settled down and gave them a valuable three scoreless after that. In 84 pitches, he struck out just two and gave up eight hits and two walks, but managed to limit the Rockies to just those four runs in his five frames.

From there, the bullpen of Pedro Baez, Scott Alexander, and Daniel Hudson allowed just two hits and a walk over the final four innings, of which Hudson got two.

Things are certainly looking up at the moment.

The win gets the Dodgers to 28-30 on the season, and they are two games below .500 for the first time since April 28. The Dodgers are also now just two games back of the Rockies in the NL West, which is fucking hilarious.

The Dodgers go for the sweep in the series finale against the Rockies tomorrow afternoon at 9:10 AM HST/12:10 PM PST/3:10 PM EST. Alex Wood will take the mound basically looking to not get hurt at this point, and he’ll face off against Chad Bettis.