Dodgers 10, Rockies 7: Dodgers rally late for a sweep in Colorado 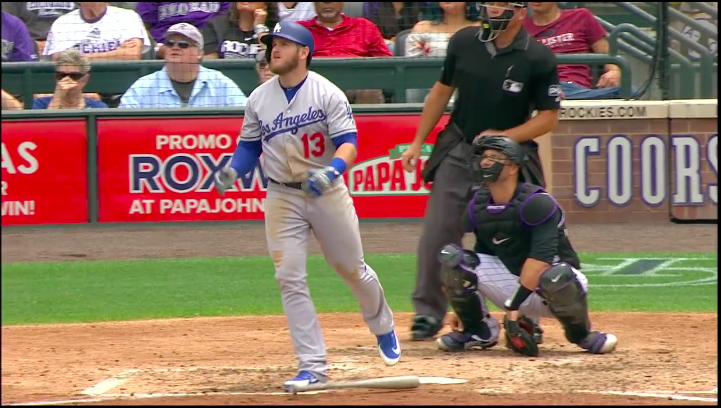 The Dodgers fell behind early, but battled all game to complete the sweep in Colorado. The Dodgers move to 29-30 on the season, while the Rockies fall to 30-29. The Dodgers have now won 13 of their last 17 games, and more importantly are 12-4 since Dustin said they were dead. I will be keeping track of that all season.

Chris Taylor led the game off by banging the second Chad Bettis pitch to center for a single. Justin Turner and Yasmani Grandal each flew out, and Matt Kemp struck out to end the inning.

Like Taylor, DJ LeMahieu led the game off with a single off Alex Wood. Unlike the Dodgers, the Rockies were able to capitalize. Charlie Blackmon drilled a comebacker off Wood’s glove for an infield single and Nolan Arenado clubbed a single up the middle to score a run, and he took second on the throw. Trevor Story hit a sac fly to make it 2-0, and Ian Desmond hit his 10th homer of the season to make it 4-0.

The Dodgers got one back, as Max Muncy led off the second with his eighth home run of the season. Yasiel Puig followed it up with a single, and Joc Pederson hit a spinny ground ball that ate Arenado up. Arenado got the out at first, but couldn’t start a double play. It didn’t matter, as Logan Forsythe struck out and Wood grounded out to end the inning.

Wood’s struggles continued in the second. He walked the opposing pitcher with one out and then walked LeMahieu on four pitches. Blackmon singled to load the bases for Arenado, and Wood battled back from a 3-1 count to strike him out. He got two strikes on Story, but hit him with a backdoor slider to bring in a run. Desmond took a very close ball four to make it 6-1. Wood finally got out of the inning with a lineout. He didn’t get hit hard in the second but issued three walks, which he’s only done in one of his 11 starts this season.

Taylor led off the third with a single. After two outs, Kemp hit a broken bat single to bring up everyone’s favorite rectangle. Muncy saw 11 pitches before drilling his second home run of the game to make it 6-4.

Wood did not return for the third inning, as the Dodgers went to Erik Goeddel. It was Wood’s second-shortest start of Wood’s career, lasting only two innings and allowing six runs and five hits while walking three. Goeddel had a bit of an easier time than Wood, as he struck out the side on 16 pitches.

Garcia remained in in the fifth and Story hustled a single into a double to lead off. Garcia made a nice play on a comebacker to catch Story in between second and third, but Desmond ended up on second during the rundown. Garcia got another comebacker for the second out, but was pulled for Josh Fields. Fields picked off Desmond to end the fifth.

What a move! #Dodgers pic.twitter.com/QPvFaR7txt

Puig broke the offensive drought in the sixth with a two-out double to chase Bettis from the game. The Rockies brought in Chris Rusin, so the Dodgers brought in Enrique Hernandez to hit for Pederson. Hernandez walked, and the Rockies brought in Scott Oberg to face Forsythe. Forsythe hit a low pitch to center for a clean RBI single and then stole second. Breyvic Valera pinch hit and grounded to short, but Story threw low to first and two runs scored to give the Dodgers their first lead of the game.

Brock Stewart was the first Dodger tasked with protecting the lead. He allowed a single to Gerardo Parra, but otherwise threw a clean sixth. The Dodgers went down in order in the top of the seventh, thanks in part to a diving play by Arenado.

Stewart remained in for the seventh and allowed a one-out single to Arenado. After a great 3-2 pitch to strike out Story, Stewart tried to pick Arenado off at first. The throw got past Muncy, allowing Arenado to get to third. Stewart got Desmond to ground to Forsythe, but he couldn’t field it cleanly and the tying run scored. Most importantly, it robbed Fields of a win without technically facing a batter. Tony Cingrani came in for Stewart to get the final out of the seventh. After the Dodgers went in order, Cingrani also threw a perfect eighth.

After his game-tying error, Forsythe came up to redeem himself to lead off the ninth. He hammered a Wade Davis fastball to right-center for double. Cody Bellinger, who came in on a double-switch with Cingrani, struck out for the first out and failed to move Forsythe over. Davis picked up Bellinger, as he threw a wild pitch to allow Forsythe to get to third with one out. Taylor drew a walk to put runners on the corners and took second on a ball in the dirt. Turner worked a nine pitch at-bat and hit a slow grounder to plate the go-ahead run.

For good measure, Grandal followed that up with his ninth home run of the season to make it 10-7. Austin Barnes hit a double, but Muncy flew out to end the fun.

Kenley Jansen got the ninth and got two groundouts and a strikeout for his 14th save of the season.

In the three games, the Dodgers had 36 hits and 33 runs. Not bad. Most importantly, the Dodgers got away from Satan Field with no one dying. The Dodgers begin a three-game set in Pittsburgh on Tuesday. Ross Stripling will start Tuesday and Dennis Santana will start Thursday, Wednesday’s starter is still TBD.

Tomorrow will likely be a big Dustin day, as the MLB draft begins at 4:00 PM PST.

I've been writing about the Dodgers since I graduated from Long Beach State, where I covered the Dirtbags in my senior year. I'm either very good or very bad at puns.
@@ac3581
Previous Dodgers @ Rockies June 3, 2018: Wood vs. Bettis
Next History of No. 30 pick in the MLB Draft