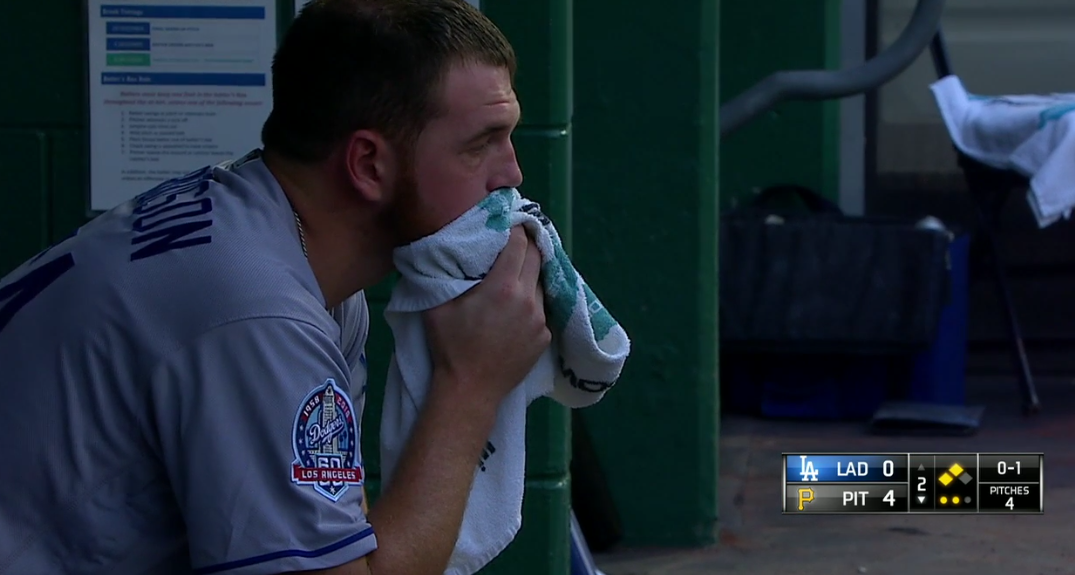 The Dodgers finally got back to .500 against the Pirates yesterday, and that lasted for a single game thanks to a disastrous debut and laughable middle relief work in spite of the bats trying their best. In the end, they fell by a score of 11-9.

The AAA pitching staff was bound to bite them at some point and today was that day. Caleb Ferguson flashed an effective fastball at 92-94 mph, but didn’t throw his change and showed a non-competitive curve. That led to him throwing 57 pitches and getting just five outs, allowing four runs on two hits, three walks, and two hit batters. It’s just the opposite of what this bullpen needed, and he certainly didn’t look ready at all.

Daniel Hudson, who somehow avoided being discharged over Pedro Baez, entered and surrendered two unearned runs in his four outs. However, make no mistake, he gave up three hits and a walk in that time and generally looked as ineffective as ever. Brock Stewart followed by trying to give the Dodgers some length, instead giving up two runs in his two innings on two hits, two walks, and a hit batter. Things continued to get worse from there, as Scott Alexander got just one out while giving up two runs on a hit and a walk, while Yimi Garcia got two outs while giving up a run on two hits and a walk.

That implosion was especially shitty timing because the offense continued to look effective. They got a rally going with two down in the 3rd thanks to back-to-back walks from Max Muncy and Justin Turner, and both were scored when Matt Kemp doubled off the wall in center.

Cody Bellinger then immediately followed by sitting change on 3-1 and yanking a homer to right while falling over.

They put up a crooked number in the 5th as well with Muncy singling, JT walking, and Kemp continuing to be white-hot with a three-run dong smashed to center.

Erik Goeddel, who has yet to give up a run, was basically the only pitcher today who was effective. While he gave up a walk, he also got a scoreless frame in the 8th. A miracle!

Meanwhile, the bats continued to do their best, rallying in the 8th. Walks by Kemp and Bellinger, along with two wild pitches worked in, meant second and third with nobody out. However, two outs were then made without advancing either runner. They did eventually score thanks to a balk and a Yasmani Grandal single to cut the deficit to two runs at 11-9.

In a game that was already serving as a reality check in terms of the team’s rotation and pen depth, they quickly got another as Tony Cingrani walked the first man of the 9th and then exited with an apparent injury. Swell. Josh Fields took over and got out of it with a infield fly and a double play, but yeah … shit.

The offense unfortunately did not have one last rally in them to complete the comeback, but that’s suddenly the least of their worries now.

Obviously, the Dodgers drop to below .500 at 30-31 after the loss, but they are still 16-14 away from Dodger Stadium. Kinda weird, but whatever. The Diamondbacks lost today, so the Dodgers remain two back in the NL West, but they also fall back into fourth place in the division.

The series finale is tomorrow and it’s at the unholy hour of 6:35 AM HST(!!!!!)/9:35 AM PST/12:35 PM EST. Dennis Santana takes the mound to make his debut as a starter, and having him follow a fellow debutee has to be concerned less than ideal. Jameson Taillon is arguably the Pirates best pitcher, and he’ll take the mound for the bad guys.