The Dodgers are finally back home at Dodger Stadium, and for better or worse nothing has changed. A starter exited with an injury, the offense bombed five homers, and they defeated the Braves 7-3. The question yet again is what the cost was.

Walker Buehler got the start and looked well on pace to delivering the deep start the Dodgers desperately needed. However, after four no-hit innings, he allowed a run on consecutive hits in the 5th and then exited after striking out the first batter of the 6th. Buehler threw just 71 pitches in 5.1 innings and struck out four. He gave up just the run on those aforementioned two hits and walked nobody.

The last pitch Buehler threw was a slider for a strikeout.

It’s been announced as a rib injury, likely from when he got hit by a comebacker in Colorado.

Walker Buehler was removed due to rib soreness. 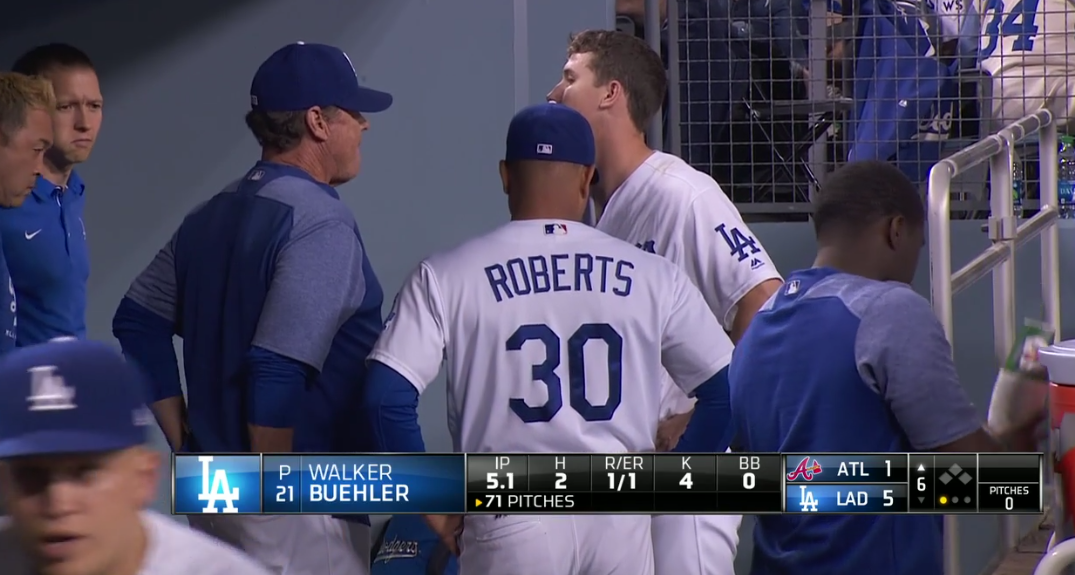 Thankfully the bats continued to show out a bit. Things got started early in the 1st with a two-out rally behind a Matt Kemp single, a Cody Bellinger walk, and then a Yasiel Puig single.

Yasmani Grandal then started the 2nd with a solo shot crushed to center.

Grandal also homered in the 4th with a solo shot to basically the same place.

This kind of domination of Brandon McCarthy a year after he caught for him did make me wonder things.

Would kinda be interested in the hitting stats of catchers facing pitchers they used to catch for a decent amount of time.

Anyway, the dong parade continued as Joc Pederson donged on a hanging curve in the 5th.

Things didn’t stop there either, as Max Muncy went oppo with a homer of his own to make it back-to-back.

Anyway, back to the disaster that is the Dodgers pitching staff. Recently recalled Pat Venditte entered for Buehler and got the second out of the 6th, but then surrendered back-to-back doubles to cut the lead to 5-2 before escaping. Venditte came back out in the 7th as Dave Roberts tried to get length from basically anybody, but Pat issued a walk and a single to put the tying run at the plate. That led to another recent recall in Adam Liberatore to be summoned, and he did an outstanding job, inducing a double play and then getting a strikeout to escape.

The offense came back again in the 7th to add insurance. Logan Forsythe walked and Liberatore tried to bunt him to scoring position but the Braves got the lead runner at second. Later with two down, Muncy doubled to right center to score Liberatore and make it 6-2, but was thrown out at third.

While I’m admittedly not sure if it’s connected, after Liberatore scored from first, he immediately gave up a homer to reduce the lead back to three runs. Thankfully he settled down after that and got the next three batters for an important 8th.

The Dodgers then got that run back in the 8th thanks to another homer, this time from Bellinger, his fourth in four games.

At least Kenley Jansen was available out of the pen, and he got a scoreless 9th in blessed drama-free 1-2-3 fashion to notch the victory.

Orel Hershiser speaking truth about current players versus past generations of players.

Also of note is Yasiel Puig exiting the game with what we presume is an injury, though nobody has said anything yet. Hopefully it’s nothing serious.