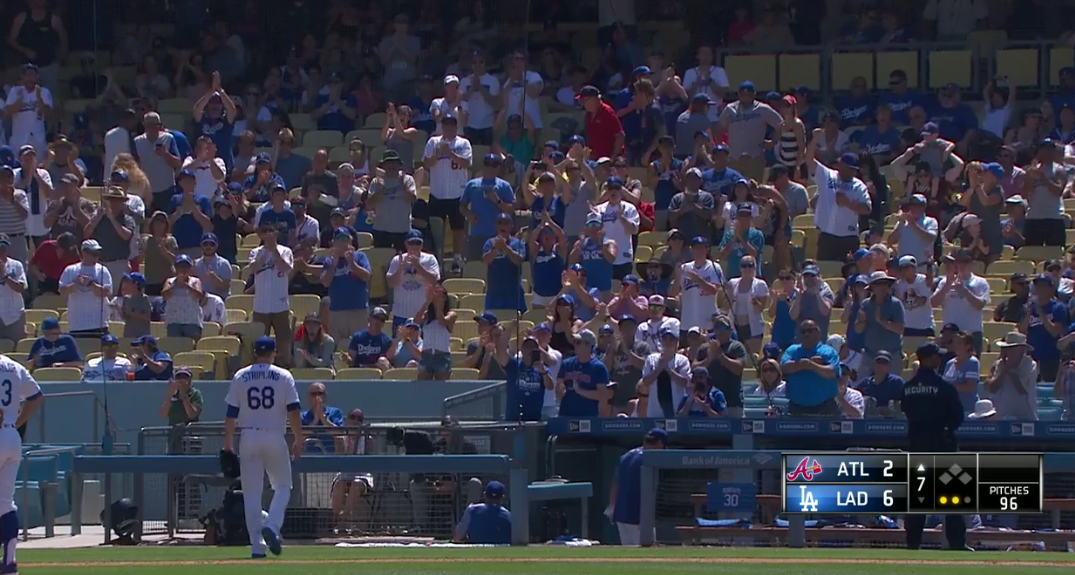 After prevailing today 7-2 over the Braves, the Dodgers have now gone seven series without dropping one, and have won six of their last seven series. They are also now a game over .500 again, and much of that is in large part due to today’s unlikely stars of the season in Ross Stripling and Max Muncy, as well as just an unlikely contributor in Logan Forsythe.

Stripling has gone from quality long reliever in the bullpen to staff ace in a matter of months, and he continued to prove that with today’s outing. While he gave up two runs on two solo homers in the 3rd to Ozzie Albies and Freddie Freeman, that’ll happen against quality hitters, and he allowed only two singles apart from that while walking nobody.

Just as important is he ate 6.2 innings on 96 pitches, and was only removed due to pitch count paranoia at 96, which is justified given the amount of injuries on this staff. Stripling struck out six batters today, which almost seems mediocre for him now.

Offensively, the Dodgers got things started from an unlikely source and in an unlikely way. Forsythe swung at the first pitch and hit that first pitch over the fence in left for a homer, just his second on the season.

Sean Newcomb is having a great year, but he has to retire after giving up a homer to this version of Logan Forsythe.

Things got more typical from there, as Austin Barnes followed with a single, was sacrificed to second by Stripling, and the bases were loaded after Chris Taylor also singled and Muncy drew a walk. Things were then cashed in behind consecutive singles from Matt Kemp and Enrique Hernandez.

They didn’t get any more after that, but Muncy made up for it in the 5th by bombing a no-doubter to right, his 12th (seriously) of the season.

The Dodgers put together a rally again in the 6th, as Cody Bellinger ripped a double and then Forsythe followed with a double of his own.

Dude can't hit fastballs right down the middle and doubles on this shit. pic.twitter.com/ZMEKU4XWP0

With two down, Stripling reached on an infield single and CT3 walked to load the bases, and then a run was plated after Muncy also walked.

For good measure, the Dodgers tacked on another in the 7th thanks to a homer to center by Enrique to make it 7-2.

It was a stress-free win since the pen did their job. Erik Goeddel threw 1.1 scoreless innings to keep his ERA at 0.00, and Adam Liberatore finished things off with a scoreless 9th.

A good start to the day.

Matt Kemp got rung up on strike two, which was a terrible call, and the umpire got mocked.

The Dodgers are now above .500 again at 33-32, but are still amazingly 16-18 at Chavez Ravine. Unfortunately, the Diamondbacks appear to be good again as they notched another win, so the NL West deficit is still 2.5 games.

Next up is a much-needed day of rest, for the bullpen if nothing else. After that, the Dodgers will welcome the Rangers to town for two.