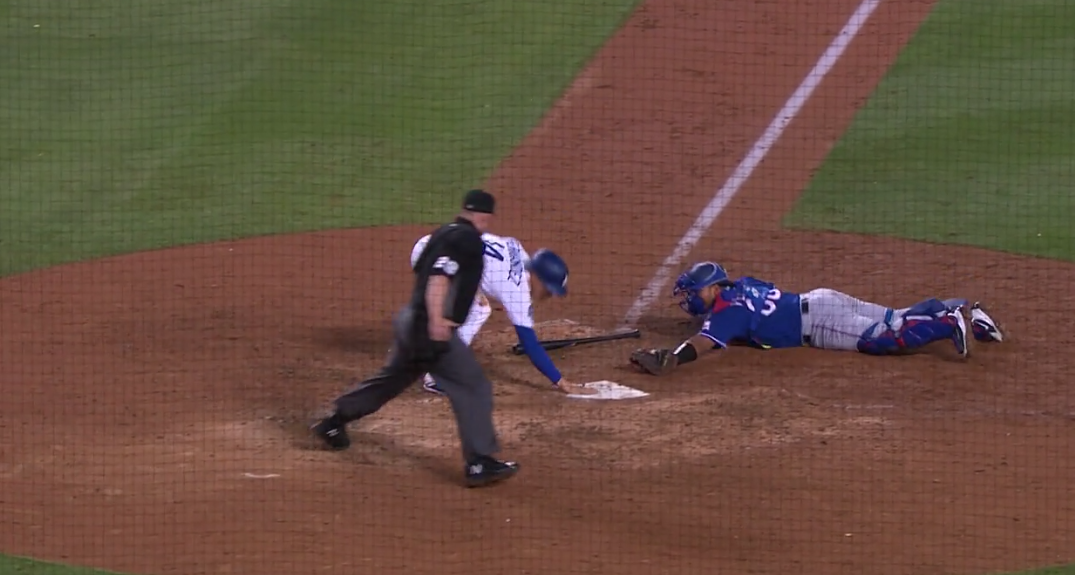 In the finale of their short two-game interleague series, the Dodgers and Rangers took things to extras. Thanks to heady baserunning and a healthy does of luck, the Dodgers secured the short sweep in 11 innings by a 3-2 score. They have now won seven of their last eight series and have gone eight series without losing one, winning 19 of their last 25.

The offense got the dong show started early again today, as Justin Turner deposited his second of the year over the fence in left for an early 1-0 lead. It’s promising that he hit an off-speed pitch off-balance out, at least in terms of wrist health.

They added another in the 2nd as well, though this one was more lucky than anything. After Cody Bellinger and Yasiel Puig drew back-to-back walks to start, the former was erased at third on a Logan Forsythe ground out. Immediately after, Puig tried to steal third and looked dead out, but Adrian Beltre just whiffed on a catch. That left the ball rolling into the outfield and Puig crossing the plate for a 2-0 lead.

While the bats didn’t score in the 3rd, there was drama at least. With two down, Matt Kemp reached on an infield single and advanced to second on the throw skipping away. Enrique Hernandez immediately followed with a single to right, and Kemp was (dubiously) sent home for some reason, which led to him being dead out. However, the throw took catcher Robinson Chirinos into the basepath and Kemp ended up trucking him.

To nobody’s surprise that started a shoving match and the required meeting of the minds, but nothing else really happened. 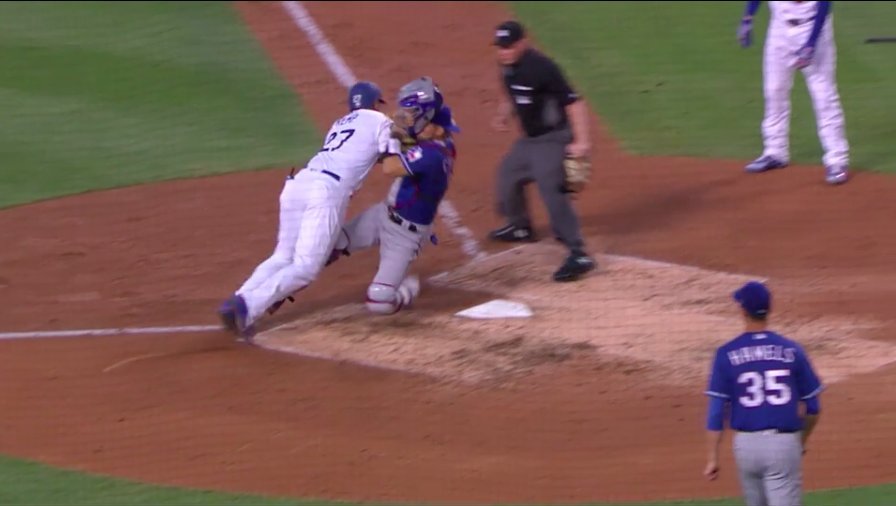 Both Kemp and Chirinos were ejected for their part, which I’m guessing the Rangers would take any day of the week.

Seems like Kemp & Chirinos were ejected for the post-play kerfuffle rather than the play itself (guessing here). As for the play, I guess it depends on your interpretation of the comment on Rule 7.13 pic.twitter.com/7LRGyaAHUH

Meanwhile Kenta Maeda was back off the DL today to give the rotation reinforcements, and things started off remarkably well, facing the minimum through his first two innings on just 14 pitches. However, the 4th proved problematic, as with one down the Rangers strung together a double and two singles consecutively to plate two runs and knot the game at 2-2.

That can happen when you don’t miss bats, and Maeda struck out just one today, but he limited the damage to just those two runs in his five innings of work. He gave up five hits and three walks, throwing just 76 pitches in his return, which is fine in this case since he’s likely just building up.

From there, the pen took over, and Edward Paredes started with a 1-2-3 frame in the 6th with two strikeouts. Scott Alexander and Josh Fields didn’t get clean innings in the 7th and 8th, allowing a walk and hit respectively, but both did get scoreless ones. Kenley Jansen then made an appearance in the 9th, recording two quick outs on just five pitches, before losing an eight-pitch battle with Shin-Soo Choo on a walk. However, he then rebounded to induce a broken-bat soft liner to second, avoiding any trouble.

Flipping back to the offensive side of things for the Dodgers, the bats were dormant since the 2nd, or honestly basically all game long. Thankfully they got things started in the 9th, with Puig working a lead-off walk and Forsythe poking a single through the right side to put runners on the corners with nobody out. However, Austin Barnes continued his strugglefest of a 2018, hitting the ball basically the only place that would’ve resulted in a double play with all the infielders in.

Yasmani Grandal followed to pinch-hit and it seemed like he ended it with a homer, but Delino DeShields Jr. robbed him with a leaping catch at the wall in dead center. 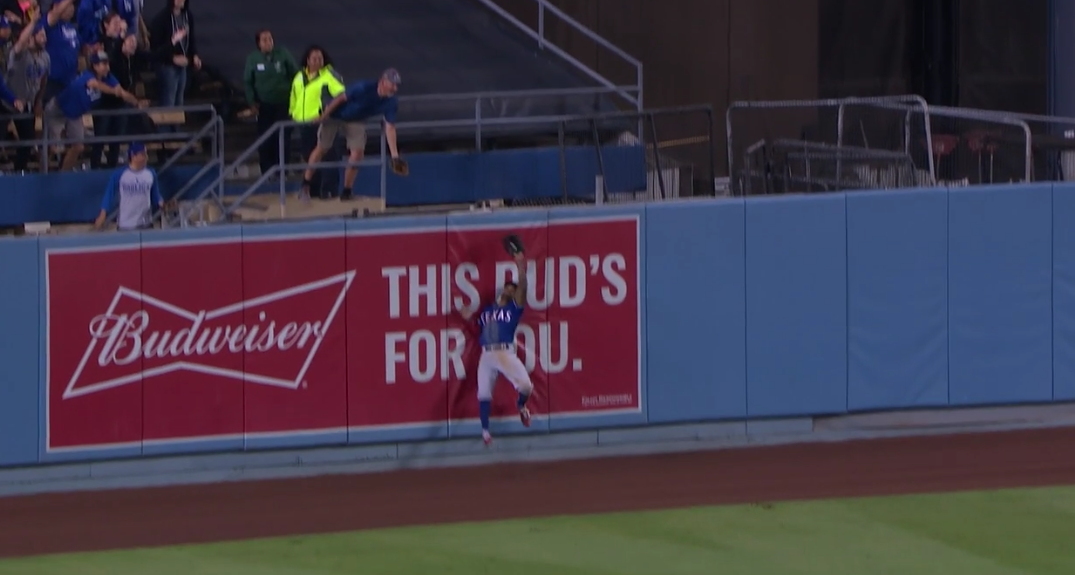 And so we went to extras, things starting with Erik Goeddel and his 0.00 ERA. That was put in danger after two singles in the frame, but he rebounded and escaped with a scoreless inning after striking out two to end it. Adam Liberatore followed in the 11th, and while he issued a walk, he ended up facing the minimum in the scoreless frame thanks to a double play.

After an impotent 10th, the Dodgers rallied again in the 11th. Enrique walked to start and with a heads-up baserunning play advanced to second on a Bellinger fly out to left. They then choose to intentionally walk Puig, which backfired when Forsythe also walked to load the bases. That brought up Barnes again, and it sure seemed like he grounded into another double play back to the pitcher, but Matt Bush‘s throw home was off line and Enrique danced around the tag to secure the wild walk-off win.

This is chemistry of some sort at least. (Via @alannarizzo) pic.twitter.com/jCZN2cSrsY

Finally, the Dodgers are back to .500 at home with an 18-18 record, and they are now 35-32 overall. With the Diamondbacks losing, the NL West deficit is down to two games.

The Dodgers have a day off tomorrow before welcoming the division rival Giants to Dodger Stadium for a three-game set.