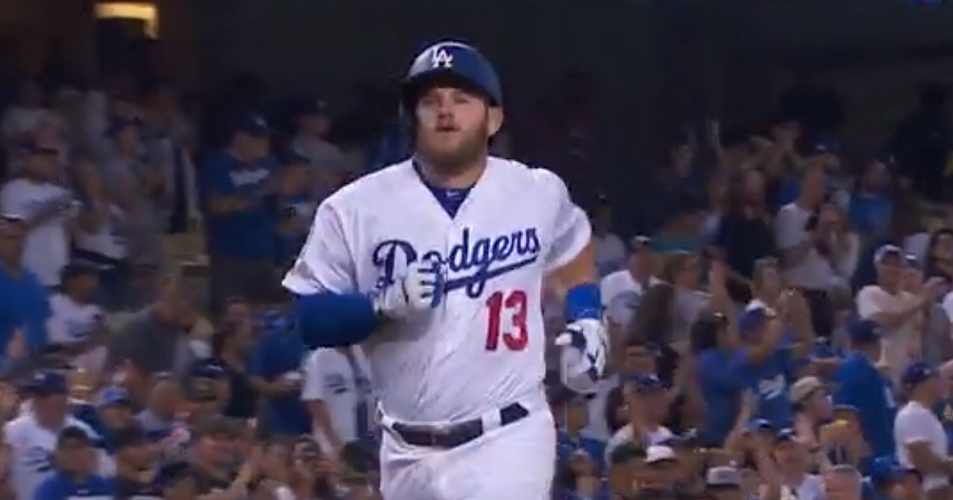 We’ve all been shocked by one Max Muncy this season. No one saw this coming, not even the biggest Muncy fan (who is probably someone in his family).

He has come a long way since then. His season with OKC was decent. He hit .309/.414/.491, but it was as a 26-year-old in Triple-A. It was hit best minor-league season to date, but there was still no inkling that he’d be a force in the majors. His LA Dodger career didn’t get off to the hottest of starts, either.

Jeff Sullivan of FanGraphs had a nice breakdown of the swing adjustments Muncy has made since coming to the organization.

“In 2015 and 2016, Muncy had a very muted and simple timing mechanism, and he held his hands higher. Now, Muncy has incorporated a leg kick, and while it’s nothing exaggerated, it’s an obvious change, and it also comes with lower hands. These are changes Muncy folded in last year in Oklahoma City, and the result is, essentially, intent to do greater damage. It’s not just about swinging at the right pitches — it’s about swinging at the right pitches, and hitting them with authority. Muncy has gotten there without sacrificing much at all in the way of contact.”

Ahh yes, the leg kick. It’s evident, as Sullivan uses screenshots from 2015-16 with Oakland and 2018 with the Dodgers. Justin Turner can tell you all about leg kicks.

Sullivan would go onto praise his strike zone judgment, and that’s a big part of the breakout. Joe Davis mentioned on the broadcast last night that Muncy, over the last couple weeks, hadn’t been seeing a lot of strikes, but he also hasn’t been chasing pitches outside the strike zone. He has the 5th-lowest chase rate in the last couple weeks, but he has actually seen a lot of pitches in the strike zone (44.5 percent, 70th-highest in MLB). But if you go out to the last 30 days, Muncy has the lowest chase rate in the game (16 percent). He also has a similar 44.6 percent Zone% (43rd).

This has translated into a season-long theme for Muncy. Among players with 150 or more plate appearances (he’s at 157), he has the 7th-lowest chase rate at 19.4 percent, which is better than guys like Mookie Betts (20 percent), Andrew McCutchen (20.2 percent) and Alex Bregman (20.3 percent). His swinging strike rate is also a solid 7.8 percent (the two correlate to one another).

Because of his elite plate discipline, he’s been able to use that to wait for his pitch, and he hasn’t missed. He has a .354 ISO, which is ridiculously unsustainable for most players. But Muncy has a well above-average exit velocity (92.1 MPH) and a fantastic 17.1-degree average launch angle. That translates to an average distance of 219 feet — 4th-best in the majors (minimum 75 PA).

Muncy might very well be this year’s Chris Taylor. It’s not a 1:1 comparison, but more that the Dodgers have coached up a mid-20s player who had at least some pedigree coming up through their respective orgs.

He’s also proving that, still, home runs are good. That has fueled his ascension to being the Dodgers’ most valuable player to date. Max Muncy, MVP. It has a nice ring to it.

We’ll see if he can continue this type of dominance. I’m not expecting him to continue to produce otherworldly ISO numbers, but he has forced the Dodgers’ hand by having Cody Bellinger get some time in center field so that Muncy’s bat can remain in the lineup. If Turner’s wrist requires another disabled list stint, they’ll have Muncy to plug in at third base. And he started at second base for the first time last night, so that might even be an option.

The Dodgers got off to a bad start this season, but they’ve righted the ship. It’s thanks to players who are capable of producing actually, you know, producing. But it’s also thanks to guys like Muncy (and Ross Stripling), who have come out of nowhere to be incredible contributors.

Dustin Nosler began writing about the Dodgers in July 2009 at his blog, Feelin' Kinda Blue. He co-hosted a weekly podcast with Jared Massey called Dugout Blues. He was a contributor/editor at The Hardball Times and True Blue LA. He graduated from California State University, Sacramento, with his bachelor’s degree in journalism and a minor in digital media. While at CSUS, he worked for the student-run newspaper The State Hornet for three years, culminating with a 1-year term as editor-in-chief. He resides in Stockton, Calif.
@DustinNosler
Previous Dodgers 12, Rangers 5: Daniel Corcino got a save, proving the stat’s value
Next Rangers @ Dodgers June 13, 2018: Maeda Returns