Dodgers 12, Rangers 5: Daniel Corcino got a save, proving the stat’s value 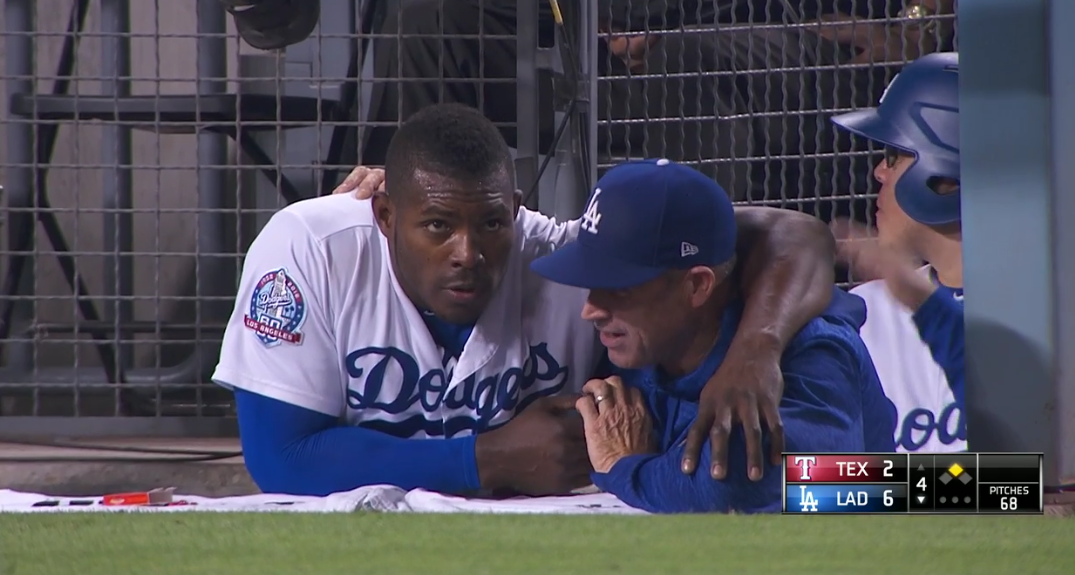 Following a day off, the Dodgers headed into a two-game series with the Rangers and the break certainly didn’t cool off their bats. The Dodgers piled up 16 hits (including five doubles and three homers), three walks, and 12 runs in an 12-5 win, ensuring that they will have not dropped a series in their last eight.

Coming off his disastrous debut, Caleb Ferguson was better in his second chance. He still struggled a bit, striking out three and surrendering five hits and two walks in his four innings of two-run ball, but he did his job. His fastball definitely feels like a weapon, and he can sit in the mid-90s with it for short stretches, but he’s still essentially a two-pitch guy with his curve, which is hard to live with in the MLB. Ferguson was removed after just 65 pitches, presumably due to the bunch of rest days coming up, but he could’ve been left in longer.

Thankfully, it almost didn’t matter what the pitchers did, as the Dodgers offense continued its June onslaught. The fun got started with two outs in the 2nd, as Yasiel Puig doubled off the wall in left-center to score Cody Bellinger from first (he reached on an early walk).

Joc Pederson then smashed his eighth homer of the year, a two-run line-drive shot that bounced off the top of the wall in center before going over.

Max Muncy‘s debut at second started inauspiciously, as he dropped a throw at first while covering the bag on a bunt attempt. However, he turned a double play immediately after and didn’t have much trouble after that. Muncy didn’t have much trouble at the plate either, as he obliterated his 13th homer of the year in the 3rd on a towering shot to right to get a run back and make it 4-2.

The bats then blew the game open in a seven-run 4th frame. Yasmani Grandal started it all with a single and Puig immediately followed by hitting a missile over the wall in left.

Joc started up a rally immediately after by going oppo into the left-center gap for a double, and with one down he was scored by a Chris Taylor single also going oppo.

Muncy restarted the rally with a single of his own to put two on, and while a Justin Turner grounder erased Muncy at second, CT3 scored after Jurickson Profar threw away the double play ball, which also moved JT to second. Matt Kemp was then issued an intentional walk, which didn’t quite work out after Bellinger came through with a totally-on-purpose check-swing double.

Finally, Grandal capped the scoring in the frame off with a single to drive in Belly.

For good measure, the Dodgers tacked another one on in the 5th. An Enrique Hernandez single and CT3 double set the table, and Muncy grounded out to short to score Enrique and make it 12-4. That completed the scoring and it was more than enough.

After all that, the pen’s task was just to not be an epic dumpster fire. Things didn’t get off the best start, as Yimi Garcia gave up a homer to his first batter in the 5th, but settled down from there and got an inning. Edward Paredes then followed in the 6th with a drama-free 1-2-3 frame.

Daniel Corcino entered for a 1-2-3 inning of his own in the 7th. However, he was tasked to get the 8th as well, and he loaded the bases on two walks and a hit-by-pitch before escaping. Corcino was also given the 9th, and in a blowout like this and with his starting pedigree it shouldn’t be much of a surprise. Things started well with a ground out and a pop out, but then a single followed, he didn’t get a strike three, and that batter drew a walk. Then Muncy had a ball bounce off his glove for a single (an error, really) and Puig’s throw was off line, which resulted in two runs … THEN Corcino finally got a strikeout to end it.

They may have no starting pitching left, but they keep finding a way to get it done.

Joe Davis talks about the Diamondbacks and Pirates score, mentioning Paul Goldschmidt‘s hot hitting, and Orel Hershiser (tries) to sing Alicia Keys. Then he proceeded to get trolled by organist Dieter Ruehle.

The Dodgers got rare breathing room above .500 with the win, improving to 34-32 on the year. The Diamondbacks are still playing, so the NL West deficit is temporarily 2.5 games.

4:10 PM HST/7:10 PM PST/10:10 PM EST will be the game time to wrap up the two-game series against the Rangers, and the Dodgers will send Kenta Maeda fresh off the DL against Cole Hamels.