Max Muncy gets the night off against Bumgarner, and Cody Bellinger gets the start after a night off. Enrique Hernandez is in the lineup again, as he’s 14-30 (.467) with three homers off Bumgarner in his career. Yasiel Puig looks to continue his red-hot pace, slashing .326/.396/.663 for a 1.059 OPS and 187 wRC+ since his return from the DL on 5/9. For the giants, Brandon Belt was activated off the DL prior to the game after missing two weeks recovering from an appendectomy. Among qualified NL batters, he ranks second in wRC+ (160), third in OPS (.950), fourth in OBP (.403), and fifth in slugging (.547). He’s no Max Muncy but he’s still been hitting at an elite level. They also have their second best hitter batting eighth and pitching.

Out of 122 starting pitchers with at least 50 IP, here’s how Wood and Bumgarner rank. Keep in mind, Bumgarner has thrown all of 11.1 innings — this is just how he’d rank based on the small sample size we have with him. 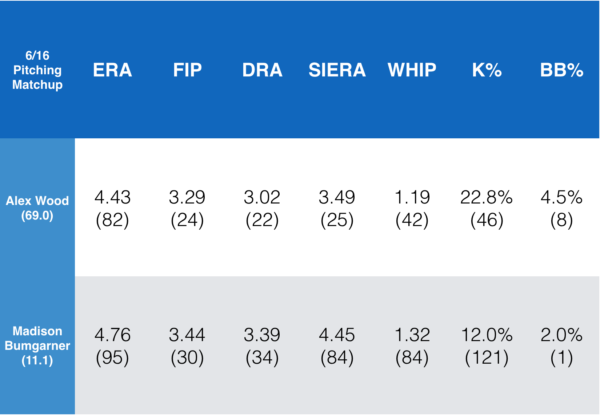 Alex Wood leads the Dodgers in innings pitched with 69, which ranks 88th overall. Yikes. The Dodgers currently have nine pitchers on the DL, and if they were all healthy, Wood would probably be on the DL with “hamstring and abductor discomfort”. I’m guessing with something relatively minor — Wood is choosing to push through his minor ailments so that the team doesn’t have to start like Manny Banuelos. If his ineffectiveness continues tonight, a short DL stint might do Wood some good. Over his last three starts, he’s accrued just 12 innings while allowing 13 runs on 20 hits including four homers over that stretch. That’s a 9.75 ERA with a 6.17 FIP (3.46 xFIP), which is less than ideal. Hopefully he gets that figured out. Bumgarner looks to also regain his form as his 4.76 ERA on the year is hardly up to his standards. He’s 15-9 in 28 starts against the Dodgers with a 2.53 ERA — odds are, we’ll see that Bumgarner sooner rather than later.

A brief look at the updated playoff odds as the Dodgers have won 20 of their last 26: 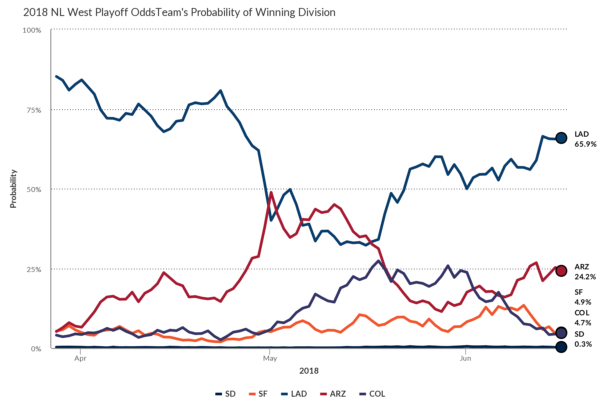 The Dodgers are now the runaway favorites to win the division despite being 2.5 back of Arizona. FanGraphs also puts the Dodgers overall playoff odds at 78.8% vs the Diamondbacks 45.6%. The Dodgers now rank sixth in run differential at +57, trailing the Braves by only six runs. The PythagenPat expected standings expects them to be 40-28 with that run differential, four games better than their actual results. That four game “underperformance” is the second largest gap behind only the Astros who are expected to be five games better than their 47-25 record, which is….yeah.

In other news, it looks like Kershaw is roughly two weeks away from returning. He’s doing a rehab start as well this time, so hopefully he returns throwing fastballs above 85 MPH.

Clayton Kershaw will throw a 3/4-inning simulated game Tuesday or Wednesday, then likely make a rehab start. He may be ready to be activated after that.

Rich Hill is slated to come back on Tuesday, and it’s said that he fixed his mechanics during his time on the DL. Maybe. Maybe it’s just the fact that he’s sporting a beard now?

Rich Hill and Dodger athletic trainers teamed up with PBATS in leading athletic drills as well as teaching healthy lifestyle lessons to #DodgersRBI and #BrentsClub players as part of the 2018 PLAY Campaign this morning. pic.twitter.com/Gqlx597Aau

Regardless, getting a healthy Hill and Kershaw over the next two weeks should help the team tremendously — the team is currently in stride with nine pitchers on the DL. Hopefully that continues tonight.

Just a guy living in Southern California, having a good time writing about baseball. Hated baseball practice as a kid, but writing about it rules. Thanks for reading!
@AllanYamashige
Previous Max Muncy has his own shirt thanks to Joe Davis, Dieter Ruehle, and … the Beastie Boys?
Next Dodgers 3, Giants 1: Enrique Hernandez dongs off Madison Bumgarner (again) for the win