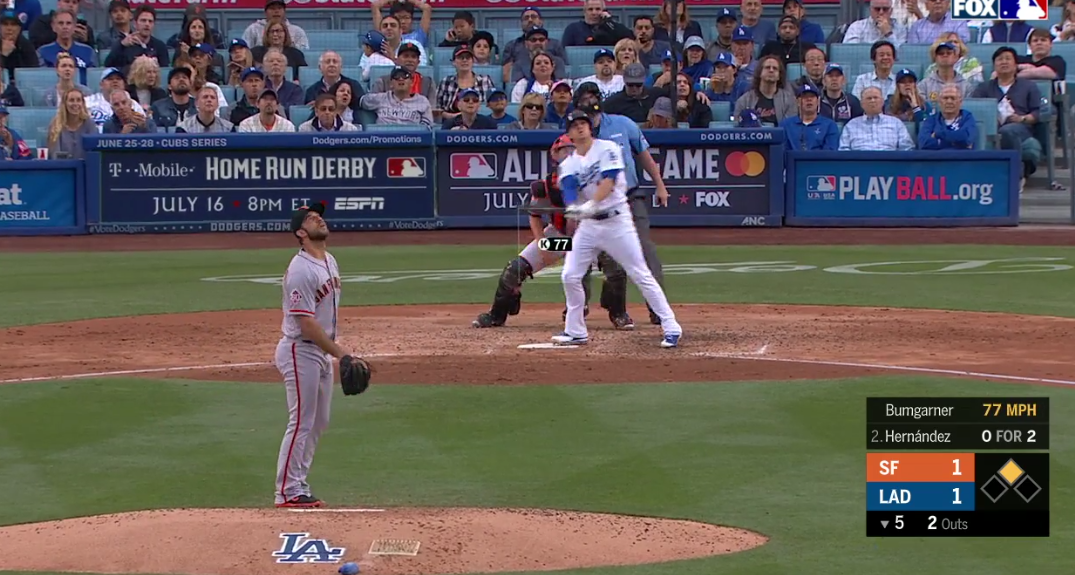 The Dodgers beat the rival Giants tonight, 3-1, taking yet another series win and marking their 21st victory in their last 27 games. They have now won five games in a row, have gone nine series in a row unbeaten, and have won eight of those nine.

The bats got things started with the long ball again, as Matt Kemp unloaded on his 12th of the season to left for a 1-0 lead.

Things were quiet after that, mainly thanks to Alex Wood only expending 43 pitches through the first four innings. However, the 5th was different as he labored through 29 pitches, and gave up a run to tie the game 1-1 on two singles to put runners on the corners and then a sac fly.

The Dodgers didn’t wait long before responding, as Austin Barnes singled and with two down in their half of the 5th, Enrique Hernandez homered to left to give them a 3-1 lead.

I suppose that shouldn’t have been that surprising, as Enrique is now 15 for 33 with five doubles and four homers off Madison Bumgarner in his career. Useful.

Kike Hernandez is hitting 2nd for the @Dodgers tonight and just homered off Madison Bumgarner.

The #Dodgers have had a HR by their No. 2 hitter in 7 straight games, the longest streak in MLB history.

Wood’s night came to an end in the 6th with two down, and he did remarkably well considering he would normally be on the disabled list. He threw 85 pitches and struck out only two, but limited the Giants to four singles and two walks, exiting with the Dodgers in front. Yimi Garcia was tasked with getting out of the 6th with a runner on second, and he did exactly that by inducing a harmless fly out.

The 7th was far more adventurous for the bullpen, as Scott Alexander had one of his shitty command days. Hilariously, he faced the minimum in the inning. Alexander started by throwing six balls in a row, obviously issuing a walk, but then got a strikeout and a strike ’em out throw ’em out double play to end it. He threw 16 pitches and four balls in the zone, but got a relatively easy inning out of it.

Austin Barnes is genius by setting up on the outside corner so that Scott Alexander barely gets it over the inside corner.

Literally all the Giants had to do was stand there and it would be bases loaded and nobody out right now.

As the offense continued to do nothing, the Dodgers continued to lean on their bullpen and Josh Fields got an actual dominant relief inning on just seven pitches, including a strikeout to maintain the two-run lead.

Of course, Kenley Jansen then got the 9th, but things got off to a rocky start when a scalded grounder down to third was stopped by a diving Justin Turner but his throw in the dirt was shockingly unable to be picked by Cody Bellinger and the tying run was put at the plate.

Kenley rebounded with a strikeout, but then put the tying run on by issuing a walk, and a softly hit grounder to first recorded the second out but advanced both runners. Thankfully Kenley shut the door on the threat by inducing a weak, jamshot foul pop-up to third to end it.

The Dodgers are playing well, folks.

As long as Matt Kemp stays healthy, I believe.

The Dodgers improve 37-32 overall and 20-18 at Dodger Stadium. Just a month ago it sure seemed like it would be a fight just to get back to .500 by the All-Star break. The Diamondbacks are still playing, so the NL West deficit is down to two games temporarily.

The series finale between the rivals is tomorrow afternoon at 10:10 AM HST/1:10 PM PST/4:10 PM EST, and it’ll be Caleb Ferguson making his third start and looking to build off his last one, facing off against Chris Stratton.