Matt Kemp and Chris Taylor both get the day off. Dave Roberts has Joc Pederson and Max Muncy at the top of the lineup for the series finale.

There have been 122 pitchers to throw at least 50 innings this season, Stratton has thrown 75, while Ferguson has thrown all of 5.2. Here’s how they matchup, but for obvious reasons it’s impossible to take anything meaningful from most of Ferguson’s stats right now. 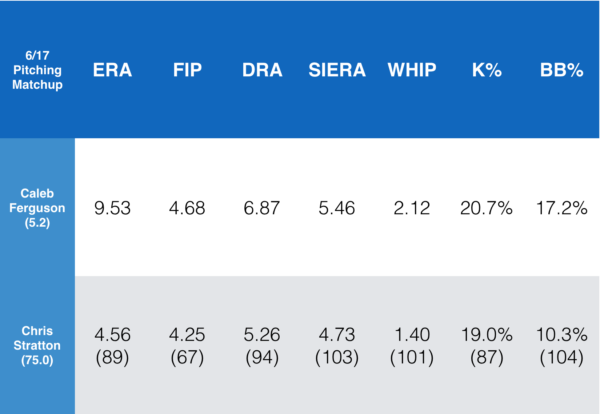 Ferguson clearly hasn’t been great. It’s also just his third MLB start, he’s 21, likely not quite ready to be pitching in the MLB, and was much better in his second start. That’s better than you or I will ever do. Kudos to the kid. Ferguson looks to build off a solid start against the Rangers where he allowed just five hits and two runs spread across four innings and just 65 pitches. I expect the Dodgers to run with him deeper into games if he is pitching in a similar fashion, just to avoid taxing the bullpen too hard. Stratton on the other hand hasn’t been much better than Ferguson. He ranks in the bottom third in almost all meaningful stats, and has allowed the tenth highest hard-hit percentage at 43.1%. Despite all that, he has seven wins because the Giants average 5.9 runs each time he starts, the 14th highest average run support of any pitcher. He’s mainly a four pitch guy, with a fastball that averages around 91-92, a changeup, slider, and curveball. He’s coming off a pretty decent three game stretch, where he’s allowed 15 hits and 6 runs over his last 17 innings, good for a 3.18 ERA and a 2.79 FIP. Stratton has however struggled against the Dodgers in his career — posting a 7.94 ERA and 5.70 FIP over 17 innings due to the fact that he’s allowed an OPS of 1.015. Should be a duel for the ages.

In other news, Cali and Charley’s dad is getting closer to returning.

Happy Fathers Day to my Dad, and any other Dads.

Just a guy living in Southern California, having a good time writing about baseball. Hated baseball practice as a kid, but writing about it rules. Thanks for reading!
@AllanYamashige
Previous Dodgers 3, Giants 1: Enrique Hernandez dongs off Madison Bumgarner (again) for the win
Next Giants 4, Dodgers 1: Offense unable to overcome early Giants homers