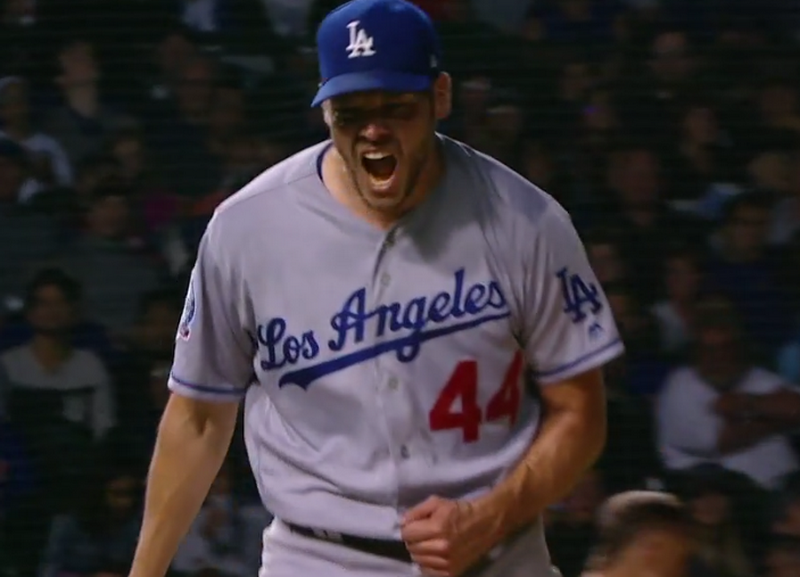 At multiple points late in tonight’s game, it sure seemed like the Dodgers were going to pull ahead for good against the Cubs, but they could just never get it done. That obviously came back to bite them as they were walked off in 11 innings, losing 2-1.

Rich Hill returned to the mound after making just two pitches in a start the last time we saw him for the Dodgers. Suffice to say, he did more than that this time around, and it was something to be celebrated.

Folks, Rich Hill has officially made it past two pitches.

Jokes aside, Hill looked as good as he has all season, generally resembling the guy who they trust every postseason with the ball. While he did have to wiggle out of a bases loaded jam in the 2nd and runners on the corners in the 6th, the other four innings were of the 1-2-3 variety. Over those six shutout frames, he threw 90 pitches, allowing just three singles and two walks while striking out six.

The Dodgers need him to be this guy for the rotation in a big way right now.

Early on the offense continued their problems with RISP from the early game. The Dodgers loaded the bases with nobody out in the 2nd after Yasiel Puig and Cody Bellinger walked, with Logan Forsythe chipping in with a lined single to right. Yet two strikeouts (one a questionable call, also picking up from the early game) and a fly out later and the game remained scoreless.

They also left runners on first and second with one out in the 3rd and then a lead-off double in the 4th, but they finally broke through in the 6th. Cody Bellinger drew a walk and then stole second, which proved important as Austin Barnes then delievered a two-out hit on a seeing-eyed single to left to plate Cody and give the Dodgers a 1-0 lead.

That left things up to the bullpen, who have been stellar of late. That especially applies to Erik Goeddel, who hadn’t given up a run in 14.1 innings as a Dodger … until tonight when Kyle Schwarber annihilated a kinda-alright-actually pitch into the right-field seats to tie the game at 1-1 in the 7th.

Goeddel actually got out of the inning on just 10 pitches, including a strikeout, so he was fine … except for that massive dong.

Josh Fields took over in the 8th, and while he allowed a double and intentionally walked a batter, he escaped the frame without damage. Fields also started the 9th for whatever reason (matchups, I guess), allowing a hard-hit single to right before being removed for Edward Paredes. All Paredes did is strike out the first two men he faced and then induced a fly out to end the inning.

The bats wasted a lead-off double in the 9th and then couldn’t capitalize on the bases loaded with two down in the 10th. That forced the Dodgers to turn to Brock Stewart against the heart of the Cubs order, which went about as expected, with a triple, an intentional walk, and a single to end the game. With the velocity down a tick or three, Brock simply doesn’t look like an MLB pitcher at the moment.

The Dodgers fall to 38-34 overall and drop back to two games behind the Diamondbacks.

The rubber match of the series will be played tomorrow afternoon at 8:20 AM HST/11:20 AM PST/2:20 PM EST, with ace Ross Stripling facing off against ace Jon Lester.