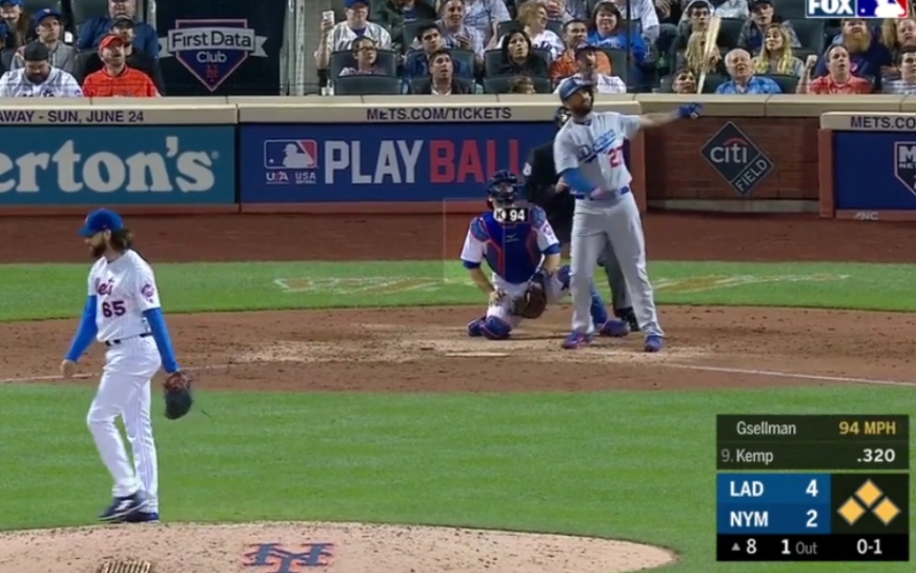 What was billed as a duel between Clayton Kershaw and Jacob deGrom never was quite that considering one was essentially making a rehab start, but neither looked particularly sharp anyway. The stars of the show eventually ended up being Caleb Ferguson out of the pen, as well as two other guys who didn’t even start the game in Chris Taylor and Matt Kemp. The trio powered the Dodgers to a series win against the Mets thanks to tonight’s 8-3 victory.

Kershaw took the mound, basically making a rehab start in the major leagues because he’s Clayton Kershaw. Fortunately, he didn’t look anything like the guy who was sitting mid-80s with his fastball the last time we saw him on a mound, as he was more like his 2018 norm at 90-92 mph.

That said, Kershaw did labor a bit and looked rusty, throwing 55 pitches in his three innings of work. He surrendered two runs on five hits and a walk, but did strikeout four batters. Definitely could’ve been better, but as far as rehab starts go, it was promising.

On the other end of things, the Dodgers were definitely up against it facing deGrom, who is one of the best starters in baseball at the moment. To their credit, they didn’t look intimidated, as Max Muncy proved by absolutely obliterating a first-pitch fastball in the 1st inning for his 14th homer of the year.

In the 4th, the bats got a one-out rally going behind a Yasmani Grandal single and an Enrique Hernandez walk. Later, with two gone, Taylor pinch-hit for Kershaw and lined a double to right-center for a 3-2 lead.

Perhaps the real hero of the game was Ferguson, who entered in the 4th out of the pen for Kershaw. He stranded runners in scoring position in the 4th, 5th, and 7th, delivering four scoreless frames on 65 pitches to preserve both the lead and the pen. He allowed just three hits and a walk, and he struck out six, most of those coming when he needed them most.

That opened the door for the Dodgers in the 8th, where they put up a huge crooked number. Things started well with Cody Bellinger singling, and then Yasiel Puig followed by dropping a hit in of his own and Cody advanced to third, but Puig was thrown out rather stupidly trying to stretch his hit into a double. Still, the Dodgers got the insurance run they wanted when Grandal was intentionally walked and then Enrique laid down a bunt for a safety squeeze that scored Cody and resulted in Enrique reaching.

After Chase Utley reached on an infield single to load the bases, Kemp pinch-hit for Ferguson and came through in a major way by pummeling his 13th homer of the year to left for a grand dong and an 8-2 lead.

Yimi Garcia took over in the 8th, and he continued to do his thing, where he looks quite good when he doesn’t give up homers. Unfortunately, he did the homer thing today and that cut the lead to 8-3. Edward Paredes then came in to finish the game in the 9th, and while he gave up an infield single, he otherwise got an easy frame to end it.

This was a bad play, sure, but this trajectory was so weird pic.twitter.com/otcGVVuXdq

The win improves the Dodgers to 40-35 overall, but the Diamondbacks also won today so the NL West deficit remains at 2.5 games.

The Dodgers will go for the sweep against the Mets tomorrow afternoon at 7:10 AM HST/10:10 PM PST/1:10 PM EST, sending Rich Hill to the mound looking to build off his last start against Jason Vargas, who has quite frankly been terrible this year.