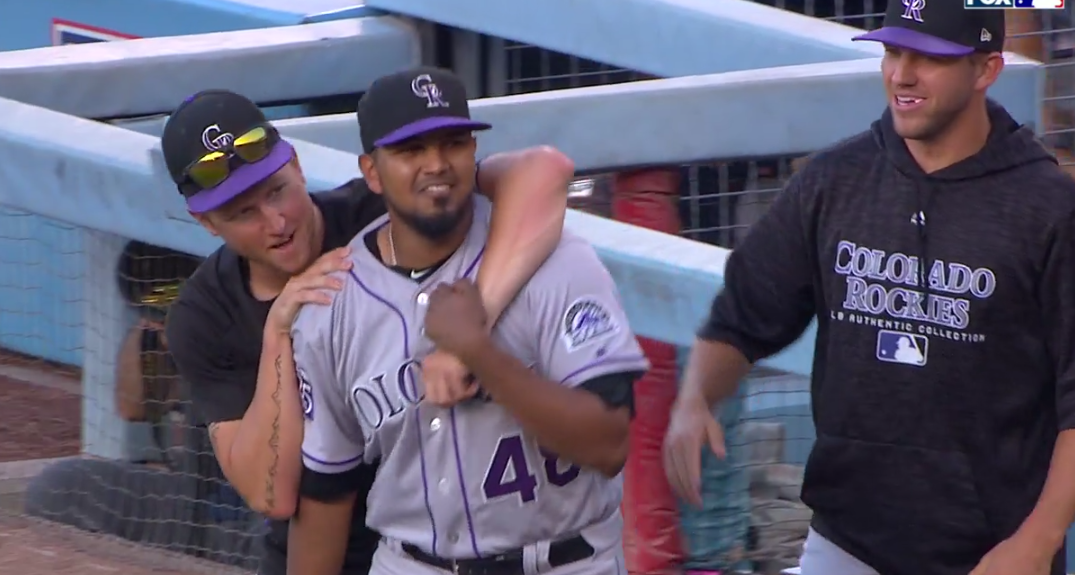 Hey, apparently the Dodgers suck again and the only thing that sucks worse than that is writing the recaps for these games that nobody reads. Anyway, Kenta Maeda and German Marquez had a bit of a duel, but of course the Rockies were the ones who won 3-1.

Both starters were perfect through three innings, but Kenta was the first to flinch … sorta. A double started the 4th for the Rockies, and a fly out advanced the runner to third, but Maeda seemed to get a huge strikeout only to have it ruined by a Yasmani Grandal passed ball to score the run.

The inning ended without further damage, but no damage should’ve happened to begin with and yet the Dodgers were down 1-0. The 5th started with something a lot more clear cut, as Ian Desmond bombed a no-doubter to make it 2-0.

Meanwhile, Marquez held his perfecto through five innings before Enrique Hernandez broke it up in the 6th with his 14th dong of the year.

That cut the lead to 2-1, but Maeda gave the run back in the 7th. The frame started with a double and a walk, and while he got out of it without major damage, it wasn’t before he surrendered a single to make it 3-1. Still, Maeda looked quite good, giving the Dodgers seven innings and 97 pitches, allowing three runs (two earned) on just five hits and two walks while striking out nine batters.

Edward Paredes faced one batter and gave up a hit, then gave way to Daniel Hudson, who got all three batters he faced in the 8th. Hudson then came back out for the 9th, and got a 1-2-3 inning.

It continued not to matter, as the Dodgers didn’t get a RISP last game and didn’t get one this game until the 9th on fielder’s indifference. Marquez gave up just the solo homer and a single in his outing, walking none and striking out nine. Adam Ottavino took over in the 9th and continued on, allowing a single but closing the door eventually.

The Dodgers drop to 43-39 with the loss, edging closer to .500. Speaking of .500, they are now a shitty 22-23 at Chavez Ravine. As a result, the Dodgers are temporarily at least four games behind the Diamondbacks in the NL West.

Tomorrow they’ll try to avoid being swept at 10:10 AM HST/1:10 PM PST/4:10 PM EST, with Ross Stripling facing off against Chad Bettis. They should win that, but they can’t hit worth a fuck, so that sucks.