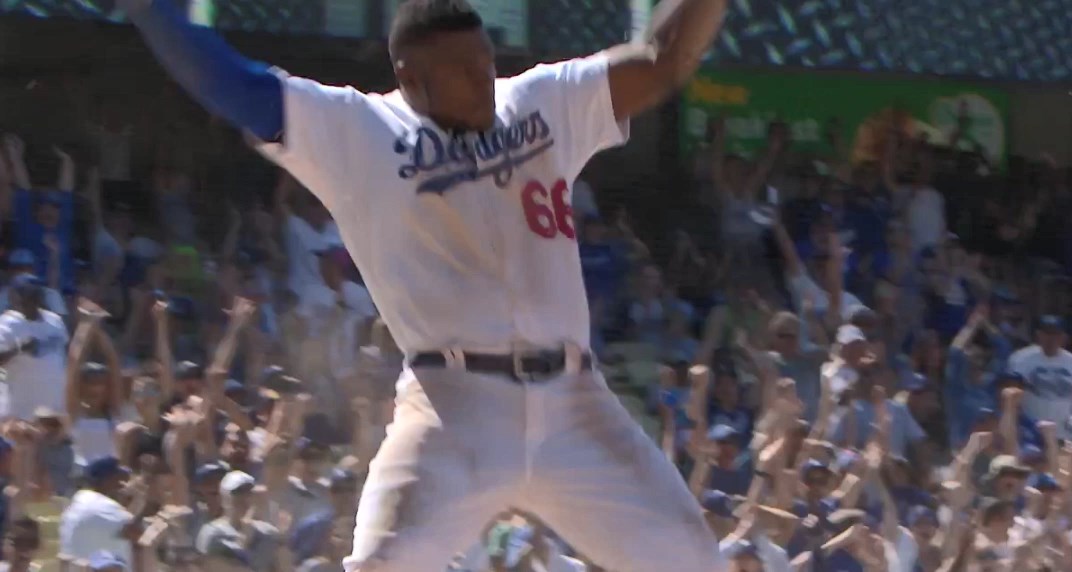 After a surge that started in mid-May, the Dodgers have cooled off a bit of late, dropping their last three games. Thankfully, two key Dodgers were determined to end that streak, and they came through late in a 6-4 win over the Rockies.

During the last two games the Dodgers had a grand total of one at-bat with RISP (only thanks to a defensive indifference), but it took them just two batters to get into one of those situations today thanks to Chris Taylor being hit by a pitch and Max Muncy drawing a walk to start the 1st. Justin Turner then hit a deep fly ball to the track in center and both runners moved up, which would prove important as Matt Kemp plated the game’s first run with a grounder to first.

With the offense scuffling, the Dodgers desperately needed a quality outing from surprise ace Ross Stripling, and instead they got something like an old version of him. In the first three innings, he surrendered a whopping seven hits and a walk, coughing up three runs and putting the team in an early hole.

The bats did fight back in the 3rd behind another Muncy walk and a Kemp double down the line in left that was somehow able to score Mad Max and cut the Rockies lead to 3-2.

Unfortunately, the Rockies restored their two-run advantage in the 5th behind a Nolan Arenado solo shot to center on a decent curve, but one that was left further up than allowable to a guy like him. Stripling didn’t look his best on the day, but he battled and gave the Dodgers 92 pitches and six innings. He ended up allowing four runs on nine hits and a walk, but did get back to missing bats with seven strikeouts.

In the Dodgers half of the 5th, the bats rallied. With one down, Muncy singled sharply to center, JT walked, and Kemp came through again with a single to left to drive in a run.

After the throw got past the catcher to put runners at second and third, Cody Bellinger managed to tie the game, 4-4, with a grounder to second.

That brought up the Dodgers pen in the 7th, which has been a sore spot lately. Scott Alexander entered and did his thing (for better or worse), walking a man but getting three ground ball outs. Daniel Hudson got the 8th in a tie game, which is horrifying, but also hard to argue with at this point. At least he justified the faith with a 1-2-3 frame that included a strikeout.

The pen did their job and gave Kemp enough time to homer to dead center in the 8th, which was his 14th of the year and put the Dodgers ahead late.

They also added insurance in probably the most amazing way possible. Yasiel Puig doubled to left and Joc Pederson followed by grounding an infield single to second. However, Puig wasn’t satisfied with just that, and he ended up scoring after DJ LeMahieu lost focus for a bit and lobbed the ball back in to first, not seeing Puig dancing off the bag at third, and thus the insurance run was secured to make it 6-4.

I like how you can't tell if he's celebrating or if he just got shot. pic.twitter.com/ylKgm6Oroz

From there, Kenley Jansen got the ball in the 9th, as usual. All he did was go strikeout, can of corn fly out to right, and a strikeout to end it.

The Dodgers improve to 44-39 overall with the victory, and they get back to .500 at home at 23-23. The Diamondbacks are currently losing against the Giants, but it’s not over yet, so the NL West deficit is temporarily down to three games.

Tomorrow the Pirates will come to town for a three-game series that starts at the usual time of 4:10 PM HST/7:10 PM PST/10:10 PM EST. Alex Wood will look to continue building towards finding last year’s form, and he’ll face Nick Kingham.