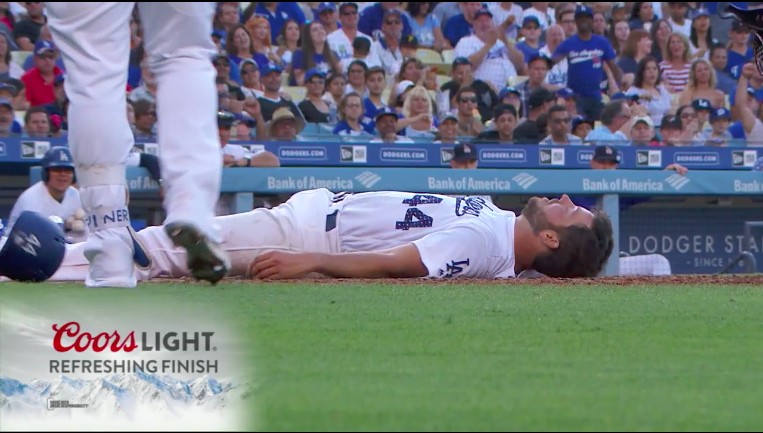 The Dodgers finished off their homestand with a win against the Pirates, giving the Dodgers their first three-game sweep at home this season. The Dodgers outscored the Pirates 31-8 in the series. Unfortunately, this is the final meeting between the two teams.

After Rich Hill went 1-2-3 in the first, Pirate starter Clay Holmes issued walks to the first two batters he faced. He got a force out and a foul out, but Yasmani Grandal poked a two-out single to left to drive in a run. Another walk loaded the bases, but Holmes froze Enrique Hernandez to escape the jam.

After each pitcher tossed 1-2-3 second innings, the Pirates got their first baserunner of the game on a Jordy Mercer leadoff double in the third. After a walk, Holmes bunted to Cody Bellinger, who went to third to get the first out. After a strikeout, Starling Marte hit a double down the third base line to give the Pirates a 2-1 lead.

Max Muncy led off the bottom of the third with a single on the eighth pitch of his at bat. After a strikeout, Bellinger laced a double to right center to put a pair of runners in scoring position. Grandal knocked a double down the first base line to plate both runners and give the Dodgers the lead. Chris Taylor singled to make it 4-2 and chase Holmes from the game.

Hill had quite an eventful fourth inning. After throwing a perfect top of the inning, he led the bottom off with a perfect bunt single.

Rich Hill now has the Dodgers' 5th-fastest home-to-first time on a single this season.

Hill then took second on a ball in the dirt and took third on a wild pitch. Muncy hit a fly ball to center, and Hill was thrown out trying to tag up to end the inning.

After a strikeout to start the fifth, Hill was checked by a trainer following that awkward slide at home. He stayed in and allowed a pair of singles, but got a lineout and a groundout to escape trouble.

A scary moment began the bottom of the fifth, as Tyler Glasnow hit Justin Turner with a 99 MPH fastball. Luckily, it hit Turner on the shoulder before getting him in the face. Turner remained in the game and stole second two pitches later. Glasnow walked the bases loaded, and Taylor singled again to make it 6-2. That single ended Glasnow’s night with three walks and a two-run single without recording an out. Edgar Santana came in for Glasnow and got Hernandez to line hard into a double play. After an infield single, Chase Utley pinch hit for Hill and grounded out to end the inning.

Daniel Hudson was the first Dodger out of the bullpen. He got a strikeout before allowing a single. I looked down at my phone, and then I looked up and Hudson was yelling at the first base umpire, who apparently ejected him. Scott Alexander took over for Hudson and didn’t have to put a baserunner on to get a double play, he just did so on the first pitch to end the inning. The Dodgers went quietly in the sixth, and Alexander worked around a walk for a scoreless seventh.

With Alexander needed earlier than usual, the Dodgers went to Edward Paredes in the eighth. Paredes allowed a single before Gregory Polanco hit a no-doubter to cut the lead to 6-4. Dave Roberts then went to Kenley Jansen for a five-out save opportunity. He allowed a two-out single, but escaped the eighth. Jansen came back out for the ninth and allowed a two-out, two-strike single before finishing it off for his 23rd save of the season.

The Dodgers move to 47-39 on the season with a chance to move to a half game behind the Diamondbacks in the NL West. They’re off tomorrow and begin a three-game series in Anaheim on Friday. Kenta Maeda will start Friday, potentially pitching against Shohei Ohtani, who has returned from an elbow injury as a designated hitter for the Angels. The Angels haven’t announced any of their starters for the series. The Angels have to be weird, so their game on Friday night will begin at 7:07 PST.

Go have a fun, safe Fourth of July, people.

I've been writing about the Dodgers since I graduated from Long Beach State, where I covered the Dirtbags in my senior year. I'm either very good or very bad at puns.
@@ac3581
Previous Pirates @ Dodgers July 4, 2018: Happy Fourth of July
Next Dodgers’ reported interest in Tigers’ RHP Michael Fulmer doesn’t make much sense