Angels 3, Dodgers 2: Win streak stopped at 4 after an absolute mess of a 9th 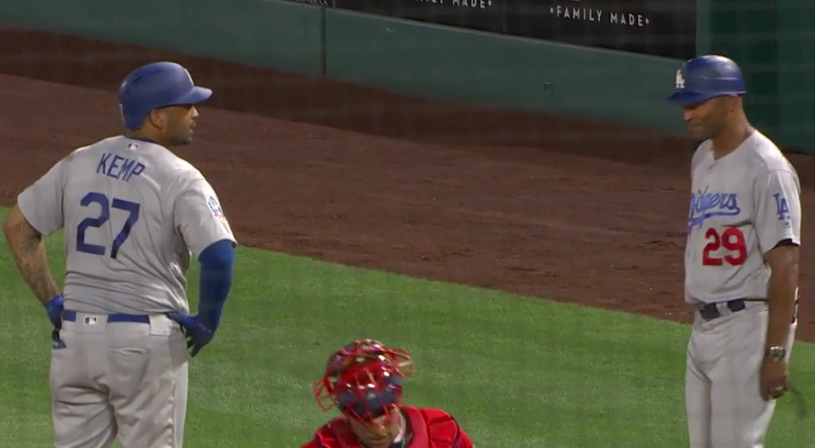 The Los Angeles Dodgers faced off against the Anaheim Angels tonight in the start of a Freeway Series between the two clubs, and it was about 900 degrees at game time.

Things were going well until the 9th, when shoddy defense cost the Dodgers and they dropped the series opener to the Angels by a 3-2 score.

The Dodgers didn’t have one of their better days offensively, totaling just four hits (one double) and three walks. After Joc Pederson started the game by reaching on an error, Angels starter Felix Pena sat down 11 in a row. With two outs in the 4th, however, Cody Bellinger smacked an oppo double off the wall and Matt Kemp followed by immediately singling on the first pitch he saw to net a run.

The 6th saw them strike again thanks to the same guy, as after Justin Turner and Bellinger drew walks, Kemp stepped up and yanked a single to left to score JT. As a bonus, what happened after was … interesting.

Meanwhile, Kenta Maeda started off the night with 10 outs in a row and got five scoreless innings. The much anticipated matchup between him and Shohei Otani led to two outs, including a strikeout in their initial encounter.

That nasty change was indicative of the stuff he had tonight and he stuck out nine batters. However, he seemed to tire a bit in the 6th, perhaps due to the blistering heat. Maeda surrendered two hits and two walks (one intentional to Mike Trout) in the frame, including surrendering a run on a balk. He exited with the bases loaded and two outs after 86 pitches, needing help to preserve his line.

Thankfully it was one of Scott Alexander‘s good command days, and he got Albert Pujols to strike out to escape the jam. He then came back out for the 7th and got two strikeouts and a ground out to move things right along.

Since returning from the minors in early May, Scott Alexander has a 2.54 ERA in 27 appearances, with 25 strikeouts and 10 walks. His ground ball rate on the season is up to 74.3%

Daniel Hudson then entered in the 8th … and I guess he’s the setup man now. I have a lot of confidence in this plan going forward, you guys. Hudson recorded two outs before issuing a walk to bring up Trout, but he miraculously got him to pop up to second to get out of a jam.

Kenley Jansen took over for the 9th as usual, and he got off to a great start with a ground out and a strikeout. However, after going 0-2 to Ohtani, he ended up walking him to give the Angels some life. It got messier after Ohtani stole second and the throw sailed into center to grant another bag, which was immediately cashed in with a single to tie it. The game then ended in a walk-off for the Angels in a weird/pathetic way, as a check-swing single by Ian Kinsler led to Yasiel Puig making a wild throw home that skipped past everybody and scored the winning run.

This is how the Angels won.

Or, this is how the Dodgers lost. pic.twitter.com/VIqfKtMaBb

Kenta Maeda has the best reactions.

The Dodgers fall to 47-40 on the season, and with the Diamondbacks winning are now in second place in the NL West a game back.

Tomorrow doesn’t figure to be any cooler, especially since the game will be at 1:15 PM HST/4:15 PM PST/7:15 PM EST, with Ross Stripling trying to rebound for once opposite Deck McGuire.