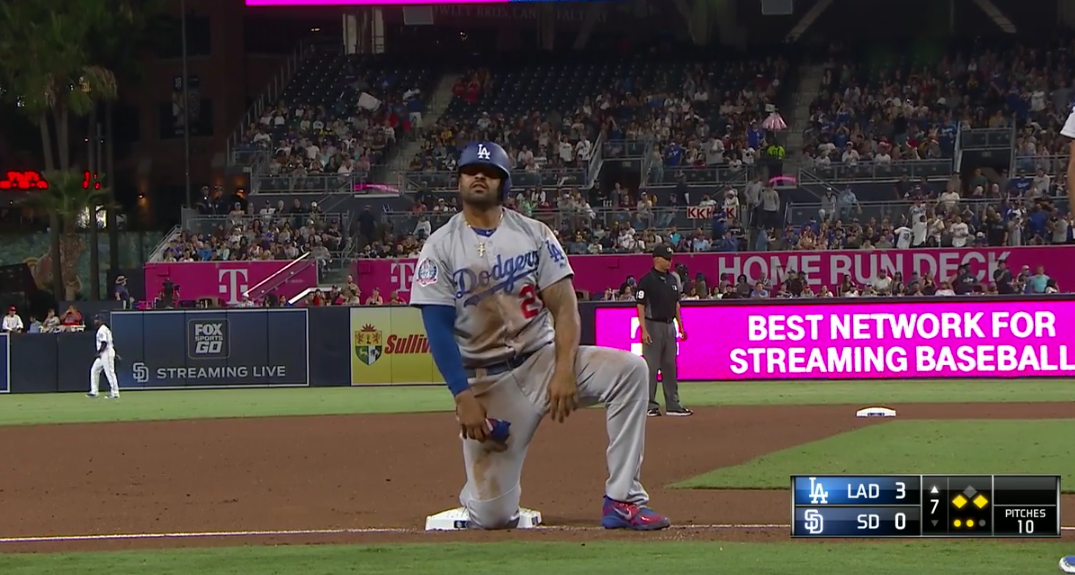 The Dodgers ended a streak of seven games alternating wins and losses by notching back-to-back wins to end the four-game series against the Padres. The 3-2 victory also meant that the Dodgers took the series from the Padres, and most importantly are now in sole possession of first place in the NL West.

Ross Stripling had probably one of his worst starts of the year … and he threw six shutout innings. In 90 pitches, he struck out five and gave up six hits and a walk, which sounds rather outstanding. But he gave up a lot of hard-hit balls and got away with a bunch of mistakes, leading even the man himself to conclude his start by muttering to himself, “So bad.”

Meanwhile, Tyson Ross came into today’s start having given up 14 hits and 15 runs in his last seven innings spread over two starts. So of course he started today’s game with five no-hit innings and six shutout innings. Then the 7th inning happened, and thank god it did.

With one down, Chris Taylor started a rally with a double to left, and Andrew Toles blooped a single into center to end the shutout and earn a 1-0 lead.

That ended Ross’s night, but it didn’t end the trouble, as Enrique Hernandez and Chase Utley subsequently both got hit to load the bases. That was taken advantage of by a pinch-hitting Matt Kemp, who yanked a ball through the infield to left for a 2-0 advantage.

A nostalgic send by Chris Woodward.

Lorenzo Bundy would've been proud of that send.

It didn’t cost the Dodgers too badly, however, as Joc Pederson (who broke up the no-hitter with a double) proceeded to line a single into right to score another and up the lead to 3-0.

With their newly earned lead, Daniel Hudson took over in the 7th and didn’t last long at all. In fact, he lasted just two batters, surrendering a walk and a clean single before giving way to Scott Alexander. Things started out so well for the suddenly effective Alexander, as he got back-to-back strikeouts to start. However, Wil Myers is scorching hot at the moment and he drove a two-run double into right center on a pitch that might’ve not even been a strike.

Alexander then got a grounder to get out of the 7th, but the lead was cut to one run at 3-2. Dylan Floro took over after him, seemingly continuing in his role as the Dodgers new setup man. Floro was dominant yet again, inducing a routine grounder to second and then getting back-to-back strikeouts. Perhaps more importantly, he was throwing some nasty shit.

That left things once again for closer Kenley Jansen in the 9th. Jansen started by getting a strikeout, but then gifted a walk to make things a bit exciting or something. Thankfully he settled down by inducing a shallow pop-up and then a routine fly ball to end it.

The win gets the Dodgers to 51-42 on the year and a rather impressive 25-19 on the road. It also means the Dodgers are in first place in the NL West by a half game after the Diamondbacks lost earlier today. 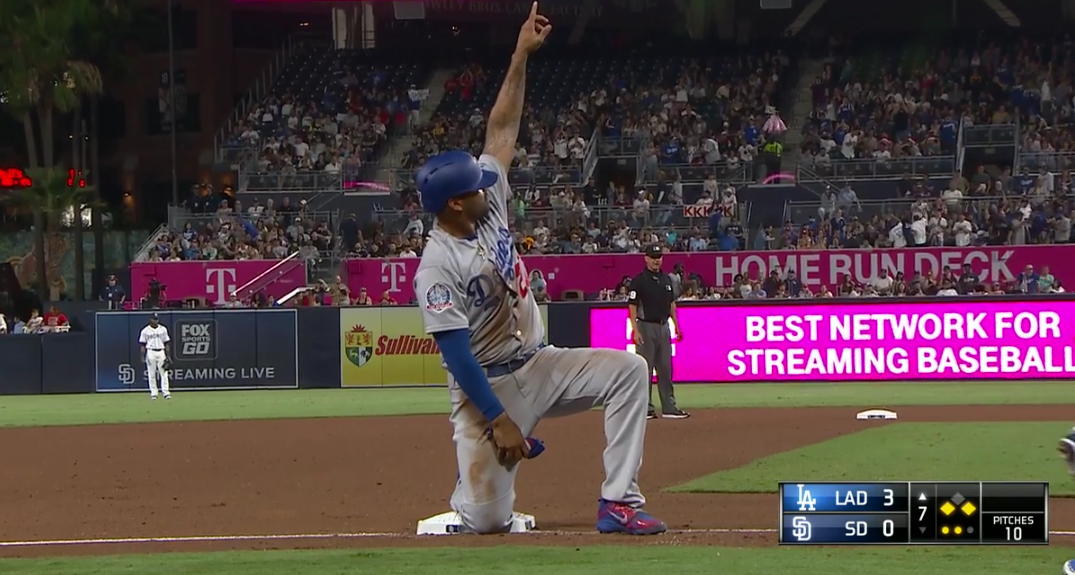 The Dodgers will go home for one last series before the All-Star break to face off against the Angels in another Freeway Series. The game will start at the usual 4:10 PM HST/7:10 PM PST/10:10 PM EST, with Walker Buehler squaring off against Felix Pena.