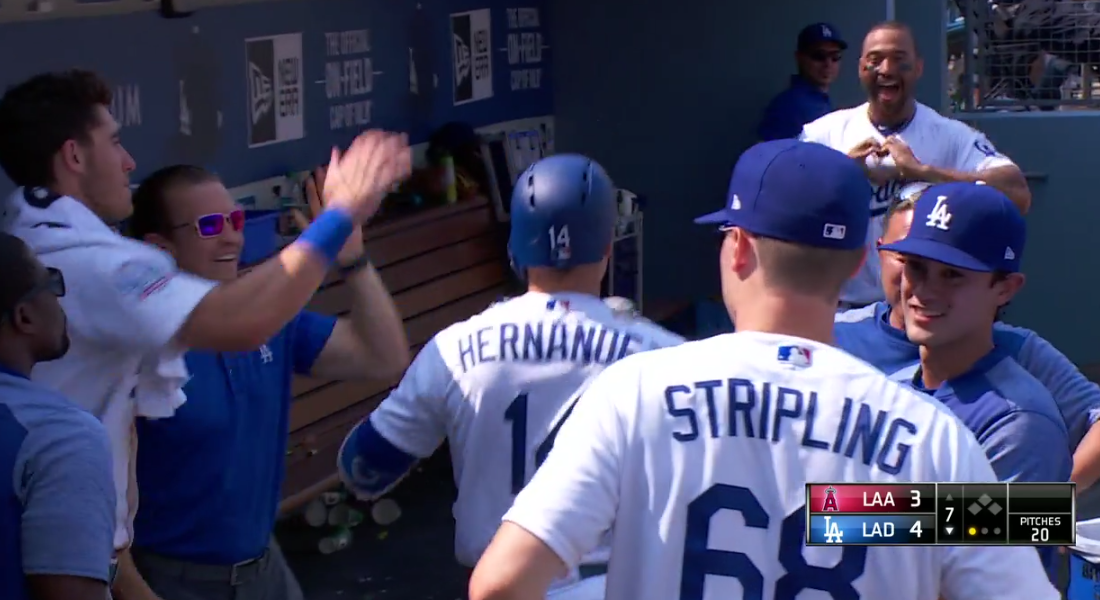 The Dodgers and Angels met for the rubber match of this Freeway Series this afternoon, and thankfully the Dodgers ended their first half with a win over the Angels, 5-3.

Good way to go into the break.

Clayton Kershaw started the final game of the first half for the Dodgers, and while he’s been hurt and hasn’t looked like himself, he has still been good. His work in the 1st sorta showed that, as he allowed a double and two walks in the frame to load the bases, but also struck out two en route to escaping any damage.

While they could’ve been trailing, it was the Boys In Blue who struck first in the 2nd. Yasmani Grandal is starting to feel it a bit and with one down he started the scoring by yanking his 13th homer of the year down the line in right.

Getting it started. #Dodgers pic.twitter.com/PRsTKM8HtI

Andrew Toles then reached on an infield single and Chris Taylor followed by singling to center to put runners on the corners. Enrique Hernandez then came up with a bit of situational hitting, lifting a fly ball to left to score another.

CT3 moved up to second on the play, and that proved important as Kershaw himself followed with a two-out single to right to drive in a run and make it 3-0.

Meanwhile, Kershaw sailed through consecutive 1-2-3 innings in the 2nd and 3rd, but ran into trouble in the 4th. An infield single and a bloop put two runners on to start, and Jefry Marte took advantage by barely getting a homer over the wall to tie it at 3-3.

From there, neither team was able to pull ahead for a bit, though a lot of that was thanks to innings like the Dodgers had in the 6th. Stuff like Cody Bellinger leading off on a bloop single, advancing to second after managing to deke the fielder into throwing behind him to first, and then getting picked off second. Then Grandal following with a single and Toles immediately grounding into a double play. Amazing!

But Kershaw got back in trouble in the 7th, getting two outs but also walking two batters. That led to Dave Roberts calling for starter Kenta Maeda, in the pen due to the All-Star break. Well, Kenta hit a man on the first pitch he threw to load the bases, but rebounded with a strikeout to escape damage. That closed the line on Kershaw, who went 6.2 innings on 108 pitches and struck out eight, giving up six hits and an uncharacteristic four walks. As he can always be counted on for, he kept fighting even after the big damage was done and that proved pivotal.

In the half of the 7th belonging to the good guys, Enrique stepped up and lined a ball just over the short barrier in left for his 16th dong of the year and a 4-3 lead.

Scott Alexander then entered in the setup role for the 8th and proceeded to notch back-to-back strikeouts and then got a pop foul to the catcher to end the 1-2-3 frame. Looking mighty good now despite all the shit he’s gotten before.

With two out in the 9th, it sure didn’t look like the Dodgers were about to get any insurance, but Bellinger singled the opposite way and then Grandal followed with one of his own to put runners on the corners. Buried in a 0-2 hole, Toles slapped a ball against the shift to left to plate insurance and make it 5-3.

Kenley Jansen took over once again in the 9th, a day after getting the L hung on him. Kenley started by getting a strikeout and was then helped by another defensive gem from Enrique, this time making a sliding catch in right on a ball that was blooped in front of him. Jansen then ended his 1-2-3 outing, thus avoiding facing Trout as the dying run, by getting a ground out to end it.

They have now won four of their last five and are 10 games over .500 on the season at 53-43. Additionally, with the Diamondbacks losing earlier, they regain first place in the NL West by a half game.