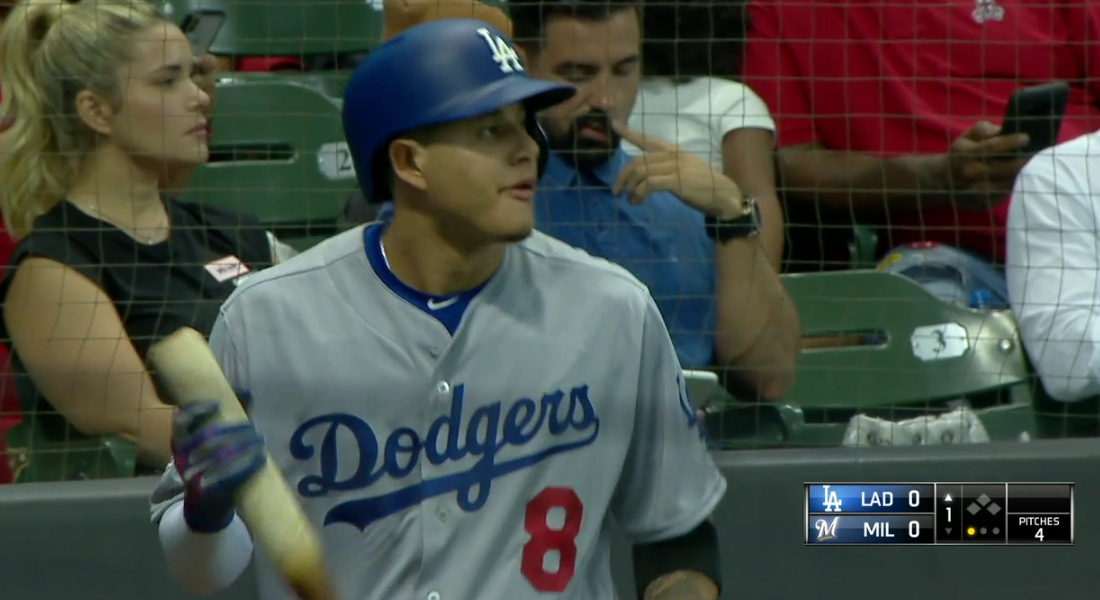 Well, that was certainly an eventful All-Star break, but I’m glad to have baseball back. Tonight the Dodgers begin their most difficult stretch of the season, starting out on the road against the Brewers. It’s nice then that they got the second half off on the right foot, prevailing in a game that was close for most of it, 6-4.

Manny Machado‘s debut with the Dodgers is the news with this game, and he made a hell of a first impression, going 2-for-3 with two walks in his debut. Though that doesn’t mean he exactly knocked the crap out of the ball in his first plate appearance.

Meanwhile, there was a game going on, and it was scoreless until the 3rd when the Dodgers got a rally going. Chris Taylor smacked a double into the left-center field gap with one out, Machado drew one of his walks, and Max Muncy got hit to load the bases. A passed ball then led to the first run of the game and put the Dodgers in an even better situation.

Unfortunately, they definitely didn’t take advantage of this. On a 3-0 count, Matt Kemp checked his swing and bounced a ball back to the pitcher. For whatever reason, Muncy broke hard for third, Kemp got thrown out at first, and Max was doubled off trying to get back to second.

Welcome to the Dodgers, Manny!

Despite the Machado doing well, the rest of the offense generally struggled against Wade Miley (of all people). Thankfully then, Rich Hill had the curve working, striking out nine over six innings of one-run ball.

Hill gave up just one run (in the 5th) on five hits and four walks, though the most important thing of this outing and any of his outings is that he didn’t give up a homer. Hopefully he continues his march back to quality rotation option to give the Dodgers a good problem.

The bats finally started to heat up in the 7th. Yasmani Grandal singled to center and Chase Utley followed by doubling to right-center field, which would’ve scored a run if any normal human were running. However, it was Yasmani Grandal The Tortoise Who Has Lead Feet who tried to score, and he was thrown out at home. I love Chris Woodward, but with the top of the order coming up … why? That ended up not costing the Dodgers the game at least, as Taylor followed with a soft single to left for a 2-1 lead.

Machado followed with a clean single to center, and Muncy then lined a double into the gap to plate another run, making it 3-1.

Still it probably should’ve been more, as Kemp was intentionally walked to load the bases, but the Dodgers couldn’t capitalize further in the 7th.

Sorry in advance, but I wrote about Scott Alexander's resurgence thanks to a velo uptick and perhaps a minor shift on the rubber. Dodgers still likely need a back-end pen arm, but him rounding into form may mean they only need one. @TheAthleticLA https://t.co/XnbIrT5zMW

Because of course, out of the pen hopped Scott Alexander, who I wrote about earlier today at The Athletic. Surprisingly, he did the opposite of implode, striking out two batters and getting a routine fly ball for a 1-2-3 inning in the 7th.

I quickly took the time to declare myself a genius … until I realized he was coming back out for the 8th.

Scott … please. Just give it a day at least.

Go read my article on Alexander. I'm a genius … unless he also starts the 8th and gives up five earned.

Oh god he's hitting for himself. Deleting everything.

A strikeout. Never a doubt in my mind. Wow. Andrew Miller dead in a ditch.

Not to worry, as he pitched to just one batter in the 8th, notching a strikeout. Unfortunately, Daniel Hudson then entered and showed why the Dodgers do in fact need a setup man, giving up a gigantic bomb to Jesus Aguilar to make it 3-2 and then exiting the game for Zac Rosscup. The newly-acquired LOOGY quickly got ahead 0-2 and then induced a fly out to left. That brought in Dylan Floro as Dave Roberts continued to play match-ups, and after a perfectly placed bunt single, he induced an infield pop-up to escape any further mess. Whew.

The Dodgers then found insurance runs in the 9th thanks to a two-out rally. Muncy started things by working a walk, Kemp followed by getting a single on a jam-shot against the shift, and Enrique Hernandez capitalized by bombing his 17th of the season to dead center to make it 6-2.

As a result of that dong, Kenley Jansen sat down and Floro came back out for the 9th, but that didn’t last long after Floro gave up a single and then a walk to setup a save situation. Kenley was then forced to enter, getting a soft line out and a strikeout to put him on the verge of escaping without damage. However, a double led to two runs (both charged to Floro) and the lead being cut to 6-4, bringing up the powerful Aguilar as the tying run. Thankfully Kenley dispatched of him with a strikeout, ending the game on a perfectly placed 94 mph cutter up in the zone for the win.

Hey, this is a very good Manny Machado shirt.

Hello folks, Manny Machado is about to make his debut with the Dodgers and here is a simple and clean shirt for you to buy. It is good and hopefully you can use it well beyond this year. https://t.co/fLjYsyWTyn pic.twitter.com/aYULWDLFIn

With the Dodgers desperately trying to reset the penalties for going over the luxury tax threshold, they are not paying @DodgersDigest to shill as much as before, so support us. Considered joining #FraudmanTwitter but they don't pay at all. Sigh.

The victory gets the Dodgers to 54-43 on the season, and temporarily to a one game lead in the NL West, as the Diamondbacks are still playing.

Tomorrow the Boys In Blue will go for the series win at 1:10 PM HST/4:10 PM PST/7:10 PM EST, sending Clayton Kershaw to the mound against Chase Anderson.