Next up in our trade deadline series are two right-handed relievers who have both had strong years out of the Miami bullpen in Kyle Barraclough and Drew Steckenrider.

First and foremost, I think a primer on the Dodgers overall pitching situation is important in assessing how they’ll operate this trade deadline. The Dodgers have a multitude of relievers coming off the DL over the next few weeks in Pedro Baez, Josh Fields, Tony Cingrani, and potentially Yimi Garcia. After that, Julio Urias against all odds is potentially on track to return late in the season, and if he were to pitch, out of the bullpen would be the most likely outcome. That’s five potential relievers on top of the obvious Jansen and Alexander, with JT Chargois an effective ROOGY, Dylan Floro and Erik Goeddel each have shown promising stuff, and Caleb Ferguson has been extremely effective with his stuff playing up in relief (1.00 ERA/1.72 FIP). This is all before addressing that if Hyun-Jin Ryu comes back down the stretch, the Dodgers have seven starting pitchers when they’ll need at most four in the playoffs — to add to that, if the Dodgers are down in the series going into Game 4, Clayton Kershaw will almost assuredly start meaning that they might only need three starters. Rich Hill, Alex Wood, and Walker Buehler all make sense to shift into the bullpen for the playoffs as their stuff could all play up. The truth of the matter is while the Dodgers would obviously welcome a reliever that would help them reach the postseason and win the division, I think the team is pretty confident that they can make that happen without any more outside additions. That means that the main addition would be an effective setup man that can be deployed with confidence in the postseason. Having said that, here’s how these two relievers stack up next to each other, out of 162 qualified relivers, and to the best reliever on the team, Kenley Jansen. 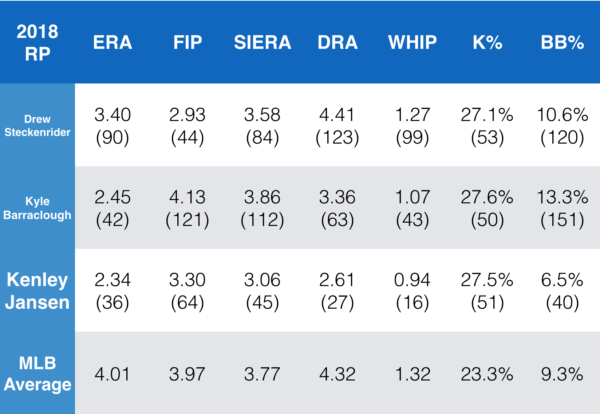 Barraclough is 28 and is in his third full season in the majors with the Marlins. On the surface level, he had an excellent year going so far as the Marlins closer. When I initially started this post, Barraclough was sitting on a 1.45 ERA with a 3.83 FIP. The outperformance of FIP by 2.37 led all qualified relievers easily this year, and would’ve ranked seventh of 2,647 qualified reliever seasons since 2000. That gap was created by a 93.8% LOB rate, the sixth highest in MLB while the league average LOB rate is 73.4%. Some relievers are incredibly tough with runners on and their LOB% can be real, but not with a .158 BABIP which led the league over the second best BABIP allowed in Sean Doolittle (.187) — the regression was unfortunately due. He had a 1.45 ERA with a 3.83 FIP before the game on July 22, where he allowed three singles, a walk to load the bases, and ultimately a walk-off grand slam. He now sits with a 2.45 ERA and 4.13 FIP. Immediately less appealing on the surface level, no doubt, and I’m sure the Marlins would’ve preferred to trade him with a 1.45 ERA instead of a 2.45 ERA, but this was coming.

On the other hand, he has proven to be an elite level closer in the past. In 2016 among all qualified relievers, he finished seventh in strikeout rate (36.9%), eighth in FIP (2.11), and tenth in fWAR (2.1) — as well as the highest walk rate of all 135 qualified relievers (14.4%). He had a decent year last year (3.00 ERA/3.66 FIP) and put up 0.6 fWAR, but it wasn’t quite the same as his stellar 2016. This year he’s obviously started with the low ERA, but with the increased peripherals — he’s been slowly trending downwards since his 2016 season. When looking for the cause of his troubles, two things that quickly stand out are changes to his pitch-mix and velocity. His fastball velocity this year (94.2) is down a full tick from last year (95.2) which was down a whole tick and a half from the year before (96.5). Over the last two seasons, his slider usage was roughly 42.0% and it’s down to 26.0% this season. The top notch reliever may still be there, and I can see the Dodgers trading for him if they feel they can get him back into that form, however as of right now his 4.13 FIP would be tenth on the team ahead of only Hudson and Garcia.

Steckenrider is 27 years-old in his second season, but didn’t exhaust his rookie status last year despite throwing 35 innings. Last year, he struck out 35.8% of batters he faced (54 strikeouts in 34.2 IP) and put up a 2.34 ERA and a 3.10 FIP in his limited season. He’s off to a strong start this year (3.40 ERA, 2.93 FIP), while both his strikeout rate and walk rate have dropped. He’s put up 0.8 fWAR this year, which would be second on the team to only Jansen (0.9 fWAR). He’s less proven than Barraclough, but his stuff is trending upwards and there is likely more to be unlocked. Steckenrider threw his slider 17.2% of the time last year, compared to only 5.2% this year. He’s essentially replaced it with a cutter which he didn’t throw last year, but he now throws 15.8% of the time. It looks like a strong offering, but strikeout rates are almost always going to dip when shelving your only off-speed pitch.

Maybe there’s room for improvement. One potential change could be a Cingrani-eqsue move and getting him throwing his slider more often. Another would be the Dodgers relief pitching philosophy as a whole, which tends to rely on fastballs in the upper third of the zone. It’s really challenging for hitters if the command is there and the pitcher has a decent fastball. Both Steckenrider and Barraclough could probably both attack hitters with high fastballs more often. If either became a Dodger, I would be surprised if they didn’t start shooting up this list. Of 138 relievers that’ve thrown at least 50 fastballs in the upper third of the zone, here’s how the two rank: 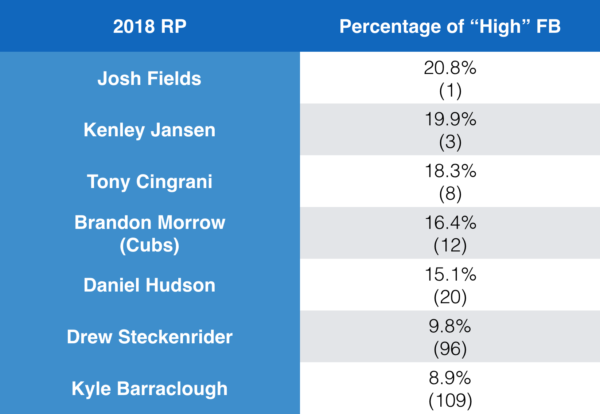 Another thing to look at is fastball drop and velocity, both of which are important for throwing up in the zone. For the purposes of this chart, a higher positive vertical movement number means it has less drop than average or what is commonly referred to as a fastball with “rise”. Steckenrider would rank among the best on the team in fastball velocity and “rise”, meaning it should play well up in the zone. 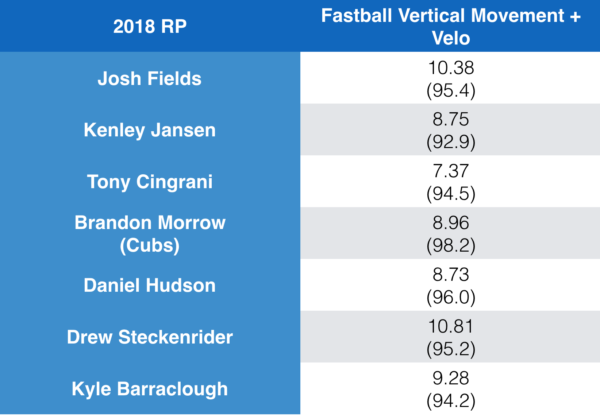 When it comes to cost, these guys will likely be expensive. Steckenrider is a rookie, meaning he is controllable up until his free agency in 2023. Essentially, he’s controllable for the remainder of this season plus the five seasons that follow meaning a team would get his age 27-32 years. Barraclough has control through the 2021 season, and is currently one year older meaning that a team would get him for this year and have control for the three years after this — his age 28-31 years. Meanwhile, there have been a couple bits of news on these potential acquisitions:

Dodgers had a scout in Tampa over the weekend checking out both Marlins and Rays pitchers. https://t.co/PyKiObErVU

In preliminary #RedSox–#Marlins trade talks, source says Miami indicated that Michael Chavis or Jay Groome alone would not be sufficient to acquire setup man Drew Steckenrider. That is one snapshot of the market value for controllable relievers. @MLB @MLBNetwork

In terms of the value the Marlins are looking for in return for Steckenrider, Michael Chavis and Jay Groome are the top two prospects left in the rather decimated Red Sox system. MLB.com has Chavis ranked #63 in their top 100, and Groome as #76 while FanGraphs has them as #95 and #98. However, they do have their faults — Groome has been injured and underwent Tommy John surgery back in May, while Chavis was suspended 80 games for PED use. Miami and the Dodgers look to be a good fit for a trade, and the scouting makes sense, lining up a potential deal. Yadier Alvarez would be a good get for a team like Miami, as he’s lost some value but his upside can still be seen in how prospect lists rank him. He didn’t make the top 100 for Baseball America or MLB.com, but FanGraphs has him at #54 and Baseball Prospectus has him as low as #41. He’s a high upside arm that is worth a gamble to get into a new situation, with new coaches, etc. Both relievers can probably be had with Alvarez as the headliner, but the surrounding prospects would have to reflect the value that controllable relievers have.

Gonsolin is a 24 year-old flashing 3/4 plus pitches who sits mid-90’s with his fastball and misses bats with his off-speed stuff. He probably doesn’t need much more time in the minors, especially with a different organization and could be up as soon as this year as a multi-inning reliever or a starter depending on how the organization would want to use him. In the Dodgers system, MLB.com has Alvarez as #7, and Gonsolin as #20. FanGraphs has Alvarez as #3, and Gonsolin outside of their top 23. On his mid-season Top 30, Dustin has Alvarez as #9, and Gonsolin as #19. Toles is the real kicker here, as he has four years of control after the year, and has shown he can hit in the MLB. He’s put up 1.8 fWAR over only 241 MLB plate appearances, while slashing .290/.336/.469 and putting up plus defense and baserunning. He’s ready for more plate appearances in the majors than the Dodgers can give him and the Dodgers would be dealing from depth.

At the end of the day, I don’t think the Dodgers would be in on these two unless they see a few things they think they can improve upon. If they can alter pitch-mix or release points or anything, and “unlock” either one of these two relievers, then the Dodgers could potentially have a guy to setup for Kenley Jansen under team control for the foreseeable future.

Just a guy living in Southern California, having a good time writing about baseball. Hated baseball practice as a kid, but writing about it rules. Thanks for reading!
@AllanYamashige
Previous Phillies 7, Dodgers 3: Bats fail with RISP, 5-Run 5th inning gives Phillies series win
Next Dodgers @ Braves July 26, 2018: Hill vs. Sanchez