After dropping a winnable series against the Phillies, the Dodgers (56-46) travel to Atlanta to take on the second place Braves (54-44). The Dodgers send the always exciting Rich Hill (4.26 ERA/4.66 FIP/4.04 DRA) to the hill against Anibal Sanchez (2.76/3.89/3.20). The Braves have surprised preseason predictions all year long, behind their young pitching and offensive talent. The Braves are 25-20 at home this year while the Dodgers are 28-22 on the road, and it should be a fun four game series between two strong teams.

Matt Kemp will probably get a warm reception of boos as he was worth an incredible -0.1 fWAR over 708 PA for the Braves and has been worth 2.2 fWAR in 348 PA in an All-Star level resurgence for the Dodgers. Personally, I love it but that’s probably because I’m a Dodgers fan and not a Braves fan. On the other hand, Charlie Culberson is starting at short for the Braves and he’s been taking advantage of his increased playing time. He’s putting up a 116 wRC+ over 198 PA, which is rather surprising as he’s never been known for his offense. Besides that, Yasmani Grandal is batting cleanup which makes sense because he’s on one of those hot streaks where he has a 1.200 OPS for like a month. Besides that, Max Muncy is playing second which should be…exciting.

There have been 144 starting pitchers to throw at least 60 innings this year, here’s how Hill and Sanchez compare: 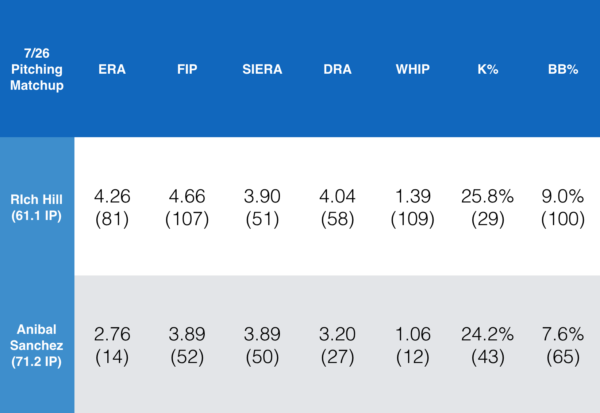 Sanchez has essentially been the Braves No. 3 starter behind Mike Foltynewicz and Sean Newcomb. While Sanchez has been very good, the difference between his 2.76 ERA and 3.89 FIP of -1.12 is the seventh biggest differential between the two. On the contrary, the Braves rank third in DRS (40), fourth in FanGraphs “DEF” (19.5), and sixth in UZR (18.5) —— so it looks like outperforming his FIP is partially due to having a great defense behind him. Hill has been extremely inconsistent this year, but he’s made six starts in a row and looked much more like the Hill of old. He’s put up a 2.95 ERA and a 3.49 FIP over his last six starts (36.2 IP) striking out 44 while walking 11. Hill looks to continue his recent run of good form and health against a strong Braves offense. 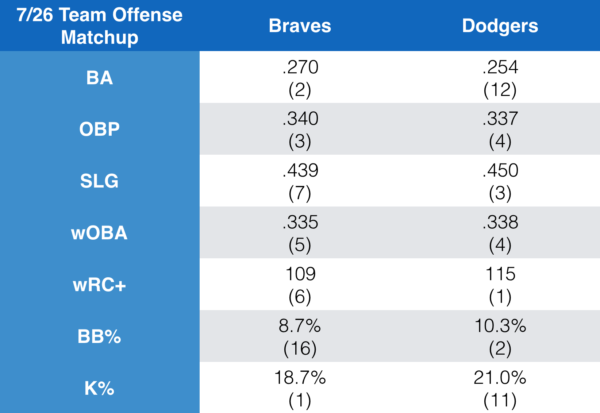 The Braves and Dodgers by rank as two of the top offenses in the league, with the Dodgers tied with the Yankees for the highest wRC+. Who knew that being top three in walk rate and slugging percentage resulted in an efficient offense? The Braves are led by their star Freddie Freeman, a breakout season by Ozzie Albies, and an offensive resurgence by Nick Markakis. Freeman is tenth in the entire league in fWAR (4.0), and eleventh in wRC+ (150). Additionally, the Dodgers have the fifth best run differential in the league at +85, which is good for second in the NL behind the Cubs at +102, while the Braves are seventh in the league and third in the NL at +72. According to FanGraphs playoff odds, the Dodgers are at 92.2% odds to make the playoffs, compared to the Braves 34.7%.

The two bullpens have both been mediocre, with the Dodgers being slightly better overall in most meaningful stats. 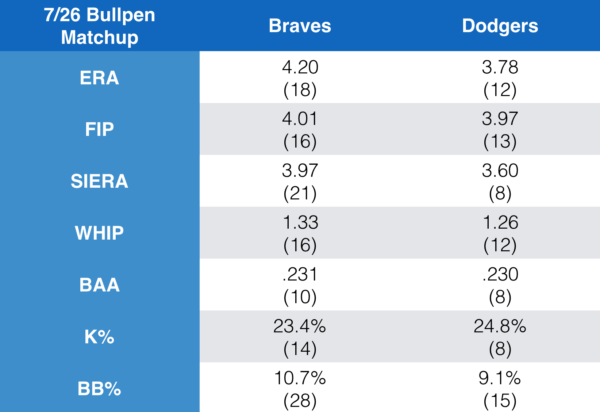 Both teams are serious contenders to different levels, as the Dodgers have World Series aspirations, and the Braves are trying to make the playoffs for the first time in five years since losing to the Dodgers in the NLDS in 2013. A very famous Juan Uribe homer was the highlight of that series, and we should remember it anytime we have the opportunity. Enjoy. Anyways, both teams have been rumored in trade talks looking for relief help which makes sense as they’re both likely playoff teams.

Ryu will throw 3-inning simulated game on Saturday, in LA.

Hyun-Jin Ryu seems to be close to returning, and the Dodgers plan of having all 25 players on the roster be pitchers is close to coming to fruition.

I also wrote about two relievers on the Marlins who could serve as upgrades in the Dodgers bullpen. Check it out here.

Just a guy living in Southern California, having a good time writing about baseball. Hated baseball practice as a kid, but writing about it rules. Thanks for reading!
@AllanYamashige
Previous 2018 Dodgers trade deadline targets: RHPs Kyle Barraclough and Drew Steckenrider, Marlins
Next Dodgers 8, Braves 2: Manny finally gets a dong as a Dodger, Hill goes 7 shutout