Joe Simpson & Chip Caray get offended by Dodgers batting practice attire, get dunked on by everybody 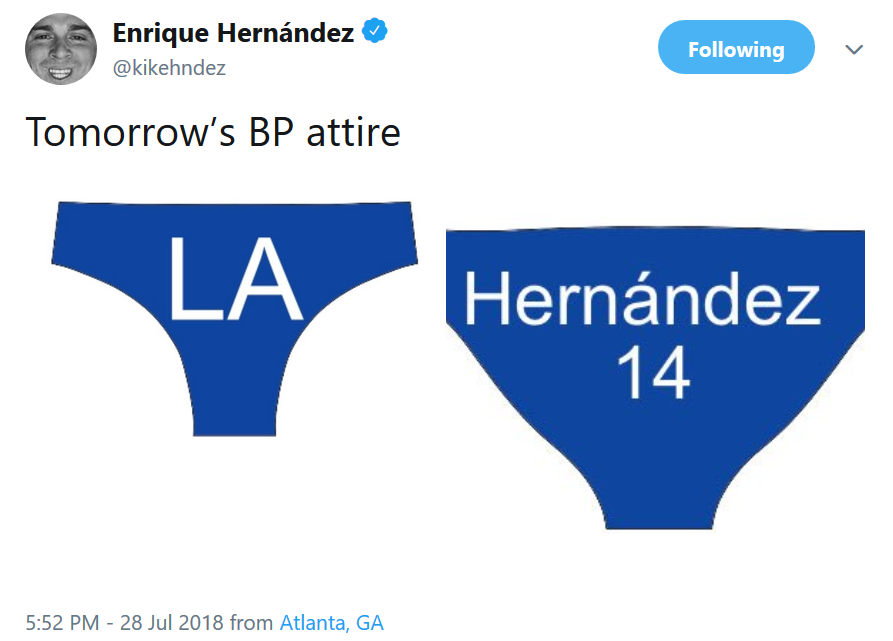 In case you weren’t already aware, Braves color guy Joe Simpson and announcer Chip Caray used the top of the fifth inning to rant about the Dodgers attire during their batting practice. They essentially called the team embarrassing and, for whatever reason, singled out Chase Utley of all people.

People tipped me off to what they were saying on Twitter, and because sometimes I do good things, I captured it.

Can't believe you are all gonna make me switch broadcasts to get OldManYellsAtCloud.mp4.

The concern trolling over merchandising is just… *Chef Kisses Fingers*

Actually though, this was the abridged version because they continue going on about it even after this (seriously).

As you can imagine, it went a bit viral as basically everybody was dunking on them. Current players, former players, Braves fans, Dodgers fans, baseball fans, sports fans, local media, national media … baseball was united through their sheer ridiculousness.

The highlight of this was, of course, Enrique Hernandez and Justin Turner mocking them.

Hey @kikehndez you got a pair of overalls i can borrow? pic.twitter.com/legFHeYENb

I do but they don’t have the last name on the back and how the heck are fans supposed to know who you are?!! 🤔

Most importantly, Jason Motte pointed out that the shirt Utley was rocking was actually to benefit the fight against cancer, which makes the whining by the announcing team look somehow even worse.

Chase Utley repping his @MotteFoundation @kikehndez #KCancer shirt and showing his support for those in the fight against cancer. Looks pretty good if you ask me!!! Get yours at https://t.co/KQvhf1wDtf and join the fight. #KCancer pic.twitter.com/JstkXC0Yer

If you want the most despicable batting practice tee ever and want to help @kikehndez and @JMotte30 fight cancer you can do so here https://t.co/qF0hKMMeUk pic.twitter.com/7iK2BARnBj

Chip, it was Chase Utley. The near universal choice for how to conduct yourself as a professional baseball player.

Here’s your single person. He had 64 at bats in 4 seasons. Lol It’s 2018 and that’s the worst thing happening to baseball? Joke of a take and he had his crew film and edit it to rip them specifically. https://t.co/9IzJajE8i7

Probably not the best when a player on the team you’re announcing for is checking you in public.

Hell, Jerry Hairston took a time out from hyping Michael Jordan to address it as well.

Was always taught to worry about your own business and never worry about what another team is doing. Didn’t appreciate them pointing out Chase Utley, who was wearing a backwards K For Cancer T-Shirt. #LA #Dodgers https://t.co/GqSeOwYvgW

It might be bad when your own fans are actively dunking on you.

In fact, most Braves fans I’ve seen are basically saying they hope this blows up so they can get a new announcing team. So … yeah.

Hey, even celebrities joined in, as singer Brad Paisley took the time to ask Justin Turner and Joc Pederson if they were going to dress up for batting practice now.

Meanwhile, Chip took to Twitter to respond and keep digging the hole deeper.

I’m not the guy taking BP in Capri-mimicking pants, no socks, and no ‘’uniform.’’ My partner merely pointed it out. Only mlb teamhesxseen be so non-‘’uniform.’’ Why not wear MLB-issued BP jerseys with names on road so paying customers know who’s who? Lighten up. https://t.co/s40vjMFbVP

I have no problem with Rocker being ‘’around’’. Why do you? https://t.co/kvIzO3IKKj

Imagine complaining for like three minutes on batting practice shirts and then going online to tell people to lighten up and then basically say John Rocker is chill. If there was a worse sequence, I can’t imagine it.

Dave Roberts hasn’t heard the audio yet, but he’s definitely not a fan of what he’s heard so far.

Dave Roberts did not appreciate it when he was told #Braves broadcasters criticized #Dodgers for taking BP in shorts/T-shirts: "I didn’t hear the audio. I want to hear it. But I take it personal when people question our professionalism …"

"…because I’ll put our professionalism — the way we play the game, the way we prepare every day — up against anybody. I have to hear the audio but that kind of sets me off a little bit."#Dodgers

Understandable, but I wish he just didn’t give a shit, as that’s the appropriate response.

Hello @kikehndez, I'm a big fan as you can tell. I don't usually make requests to players, but if you could take batting practice tomorrow in a tuxedo, that would be swell. Thank you.

Unfortunately, they will apparently not being going so since it’s a day game.

It's a damn shame tomorrow is a day game, because otherwise the Dodgers would have put on the world's dumbest fashion show during batting practice

Day game tomorrow so #Dodgers will not be taking BP on the field. Otherwise things could get … weird.

Oh well, there’s always a series in the future some time.

Anyway, feel free to contribute more people dunking on them, because there are many.