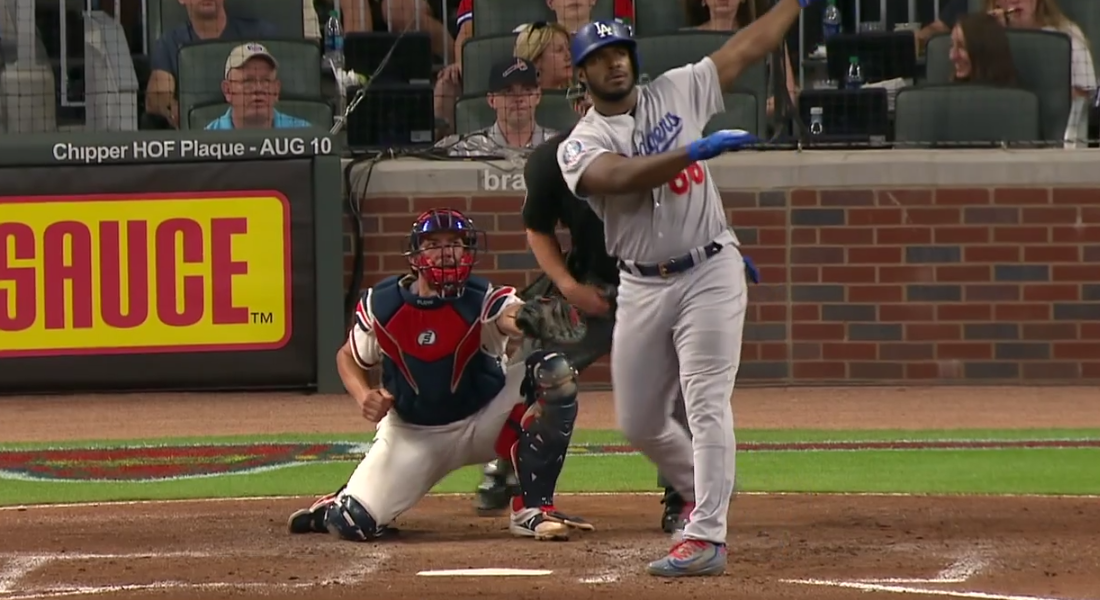 With a 5-1 victory over the Braves tonight, the Dodgers have secured a series win and at least a winning record in their 10-game road trip against three playoff-caliber teams to start the second half of the season. They are now 6-3 so far on the road trip thanks to three straight wins against the Braves to start the four-game set.

Alex Wood didn’t have his best control today, walking four batters in 5.2 innings. However, he didn’t allow a run thanks to limiting the Braves to just one hit, inducing two double plays, and getting five strikeouts. The only reason he didn’t make it an even six shutout was due to a Chris Taylor bobble with two down in his last frame. However, he did get help from Manny Machado.

Taking over for Wood was JT Chargois in likely his best role as a ROOGY, coming in and getting out of the jam with a strikeout on four pitches to end the 6th.

So the bats of the Boys In Blue had plenty of time to get going, and they opened the ledger in the 2nd inning. Enrique Hernandez singled to start and Cody Bellinger got hit by a pitch, with both runners later moving up on a fly out to center. Yasiel Puig, fresh off the disabled list, immediately contributed by flying out to deep right to score a run and make it 1-0.

Things were then quiet for a few until the 6th, when Bellinger drew a one-out walk and Puig yanked a two-out, two-run dong to left, his 12th of the year. 3-0, Dodgers.

Guess who's back? #Dodgers pic.twitter.com/Um9JLfbsDD

Caleb Ferguson entered in relief for the 7th, and started by allowing a solo dong to Johan Camargo to cut the lead to 3-1. After that he continued to look like he has so far out of the pen, getting six outs and allowing just a single to get the Dodgers to the 9th with a lead.

Fortunately, that lead was a rather comfortable one, as the Dodgers added two runs in the 9th. Puig and Austin Barnes drew back-to-back walks to start, and with one down Taylor came through with a bouncing single up the middle for a run.

Machado then followed by immediately ripping a liner over short to plate another run, making it 5-1.

Due to the four-run advantage, Kenley Jansen wasn’t needed, and instead Erik Goeddel entered for a routine 1-2-3 frame to end the game.

Perhaps the biggest story to emerge from th is is Braves announcers Joe Simpson and Chip Caray getting big mad during today’s game about the Dodgers not being in full uniform or something during batting practice.

The Dodgers get to 13 games above .500 on the season at 59-46, and again get to a temporary two-game advantage in the NL West as the Diamondbacks are playing still.

Once again, it’ll be a way too early game for me, as the Dodgers will go for the sweep of the Braves at 7:35 AM HST/10:35 AM PST/1:35 PM EST. Ross Stripling will look to bounce back a bit from a rough stretch against Sean Newcomb.