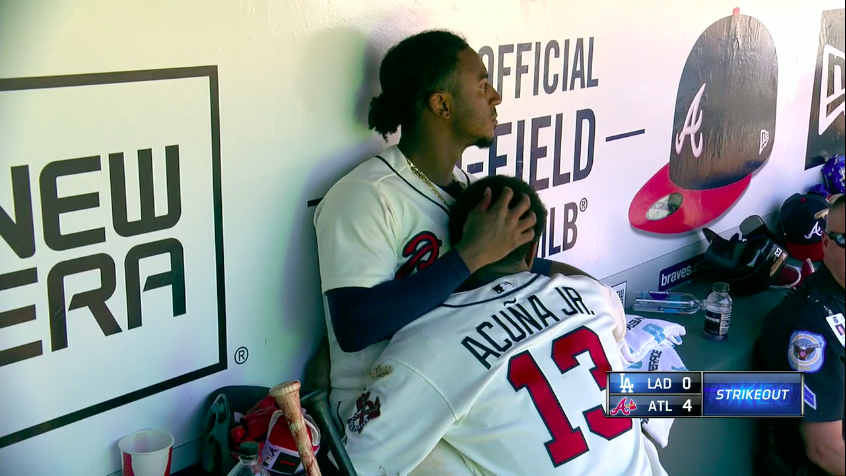 The Dodgers were looking for a four-game sweep in Atlanta. They did not accomplish that, as they came a strike away from being no-hit by Braves starter Sean Newcomb. A Chris Taylor two-out, two-strike single in the top of the ninth broke up Newcomb’s no-hitter on his 134th pitch.

After the Dodgers went down in order in the top of the first, Ross Stripling recorded two easy outs before getting in trouble. Freddie Freeman singled, and Nick Markakis and Kurt Suzuki each doubled to give Atlanta a 2-0 lead in the first.

The Dodgers went down in order in the second while Stripling worked around a leadoff single in the bottom of the inning. After another perfect inning by Newcomb in the third, Stripling allowed another leadoff single before Markakis hit a home run to make it 4-0.

Stripling remained in in the fourth and allowed a leadoff double. Manny Machado made a nice play at third for the first out, but a passed ball put a runner on third with one out. Stripling struck out Newcomb and issued a walk, but got a groundout to complete four and end his night.

The Dodgers almost got a baserunner in the fifth, as Max Muncy took ball three and walked to first. In baseball, you need four balls for a walk, so Muncy walked back to the plate and struck out chasing on the next pitch. Daniel Hudson relieved Stripling and threw the first 1-2-3 of the night for the Dodgers.

The Dodgers finally got a baserunner in the sixth, as Yasiel Puig led off with a walk. However, Newcomb got a flyout and two strikeouts to keep his no-hitter alive. Hudson remained in for the sixth inning and threw a 1-2-3, giving him two perfect innings. However, that was overshadowed by Newcomb getting through the seventh without allowing a hit.

Erik Goeddel threw a scoreless eighth, and Newcomb kept his no-hitter going with two groundouts and a strikeout. Goeddel then worked around a couple baserunners for a scoreless ninth.

Newcomb took the mound with 117 pitches in his arm and got Logan Forsythe to fly out for the first out. Cody Bellinger made Newcomb work, but flew out on a full count for the second out. With two strikes, Taylor lined a single past Johan Camargo at third for the Dodgers’ first hit and second baserunner of the game.

Newcomb finished the game with 8 2/3 shutout innings, one earned run, one hit, one walk and eight strikeouts. I was mostly rooting for the no-hitter because I had written a recap assuming the no-hitter would be complete and rewriting is trash. Such is life.

After Newcomb was taken out, Machado singled in a run to break up the shutout. Matt Kemp grounded out to end the game.

To make matters worse, the Dodgers continued to show a lack of professionalism.

This is everything and more. #Dodgers pic.twitter.com/qSduyZgUp3

The almost-no-hitter was not surprising.

#WouldOf got more hits if they took batting practice this morning, IMO.

I've been writing about the Dodgers since I graduated from Long Beach State, where I covered the Dirtbags in my senior year. I'm either very good or very bad at puns.
@@ac3581
Previous Dodgers @ Braves July 29, 2018: Stripling for the sweep
Next 2018 Dodgers trade deadline targets: RHP Raisel Iglesias, Reds