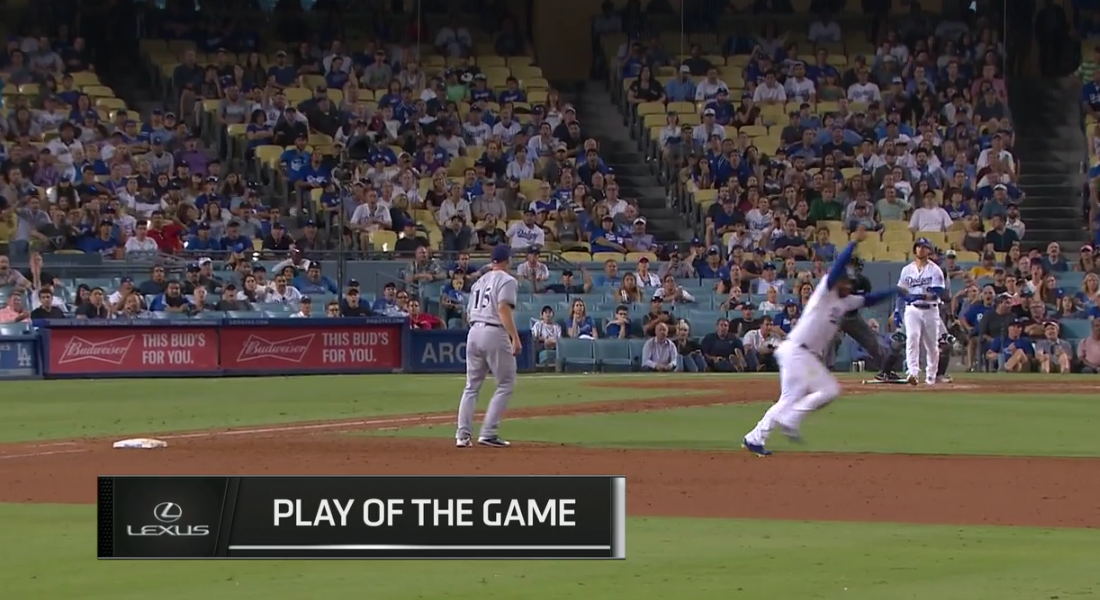 The Dodgers came into tonight’s game losers of three in a row, including the first two of the series against the Brewers, but more than that they have looked horrid doing it. Things looked about as terrible as possible for the Dodgers to start today, but they eventually rebounded and ended up walking it off in extras against the Brewers to get back in the win column with a 6-4 victory.

It literally took one batter for things to go to shit for the Dodgers, as Lorenzo Cain lashed a ball to the opposite field that skipped past Brian Dozier and rolled all the way to the wall. Cain went for third, and while Yasiel Puig‘s throw hit Dozier in the chest, his relay throw bounced and skipped past not only Manny Machado but Rich Hill backing up as well to plate a run.

Sloppy play cost the Dodgers again in the 3rd, as Cain doubled this time and then scored from second on a wild pitch after Yasmani Grandal blocked a ball and couldn’t find it seemingly forever.

Thankfully, Hill himself continued his run of excellence, going six innings on 93 pitches and not giving up another run besides to the two described (one “earned”, one not). He allowed just six hits and walked one, while striking out four.

The bats … well they started horribly again, with Chase Anderson going four perfect innings. That was explosively broken up in the 5th, thanks to Grandal hitting his 18th dong to right and Dozier immediately following with his 17th dong (and first as a member of the Dodgers) to center, tying the game at 2-2.

Dodgers fans gave Dozier a standing ovation, though it’s not clear if it was for the homer in his debut or for finally getting to see two hits in an inning again.

That score held until the 7th, when Dozier started the inning with a single and Chris Taylor drew a one-out walk. Puig followed by taking the ball the opposite way for a single to right to make it 3-2 and putting runners at the corners.

Puig for the lead! #Dodgers pic.twitter.com/TIDSPBTSV8

Enrique Hernandez followed off the bench by perfectly executing a safety squeeze to first, scoring the run, and he himself reached first due to the attempt at home.

On the other side of things, JT Chargois took over for Hill in the 7th and was in trouble after allowing two hits, but then induced a double play to barely escape. Scott Alexander wasn’t so lucky in the 8th, as he allowed two hits and walked three, coughing up the lead before getting out of it with the game tied. It was clear early that Alexander was fighting it, and I have no idea why Dave Roberts just let him labor through 25 pitches. If there’s any guy who is hot and cold based on his command, it’s Alexander.

Anyway, Kenley Jansen took over in the 9th and while he issued a two-out walk, and a steal got the pinch runner into scoring position, he rebounded with a strikeout to end the threat.

Meanwhile, following the four perfect innings against the bats to start, the Dodgers threatened every inning but just couldn’t deal the killing blow. They left a man on second with one out in the 5th, and men on first and second with nobody out in the 6th after Matt Kemp had a line drive caught at short and Grandal hit the ball hard but right into a double play. In the 7th, they left men on first and second with one out, and then couldn’t get it done with the bases loaded and two outs in the 8th after Taylor was robbed on a rocket down the line in left. They seemed to have a prime shot to walk it off in the 9th after a lead-off double, but went strikeout, ground out, and strikeout to end the threat.

Dylan Floro was then tasked with the 10th and did his usual thing, getting two routine grounders and a fly out for a 1-2-3 frame. That set things up for the Dodgers in the 10th, as Kemp started by ending a 0-for-26 streak with a single to left, and one of the hottest hitters in baseball stepped up and crushed a ball to right for a two-run walk-off dong to win it 6-4.

Alanna Rizzo has to be the best in the game at dodging those Gatorade dumps.

.@YazmanianDVL08 spoke with @alannarizzo about his approach to that final at-bat of the night to walk it off for the #Dodgers vs. the Brewers. pic.twitter.com/NLyVzZLBLW

Manny Machado’s defense continued to shine with the Dodgers, as this bare-handed play showed.

He also still wants you to suck it.

60-49 for the Dodgers now, and with the Diamondbacks idle, they are now tied for the NL West lead.

The Dodgers will try to salvage a split in the final game of their four-game set against the Brewers tomorrow at 3:00 PM HST/6:00 PM PST/9:00 PM EST. Clayton Kershaw will look to keep his recent string of performances rolling agaist Jhoulys Chacin.