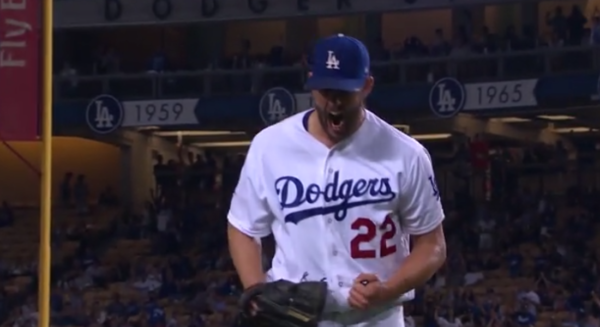 Yeah, I know some really bad stuff happened after Clayton Kershaw was removed from last night’s game. I know. I’m mad about it too. But, at the same time, I don’t really want to dwell on it, especially since we had no other content ready for today. Do you really want to just look at last night’s recap all day? Me neither. No offense, Chad.

Instead, let’s look at the biggest positive to come out of last night: Clayton Kershaw was really good. He completed eight innings for the first time this season, allowing one run, striking out nine, and walking zero. It was a classic Clayton Kershaw line score. Kershaw induced 16 swinging strikes, tied for his second-most this year, only behind his opening day effort against these same Giants.

Perhaps most importantly, Kershaw’s stellar outing followed one of the worst starts of his career in terms of the quality of his stuff. Last Wednesday in Oakland, Kershaw induced four swinging strikes in six innings and struck out just one batter, both setting near-low benchmarks for his career for starts that long. His command was awful; he couldn’t bury his slider and his curve was always spiked. He still toughed his way through a good lineup, mostly armed with just his fastball. It worked (he only allowed one run) but it was concerning nonetheless.

The pitch that propelled Kershaw to success last night is the one which has been the most troublesome for him this year: the slider. If you have a subscription to The Athletic, you can read Chad’s post on the pitch from earlier this season, which was cause for plenty of concern. It has remained inconsistent since Kershaw’s return from the disabled list, but last night he had a good one:

Of the 16 swings and misses that Kershaw induced last night, 13 were on sliders. That’s his highest total of slider swings and misses in a single start since last September. One thing that was nice is that the slider had more depth than it has had in the past few months: 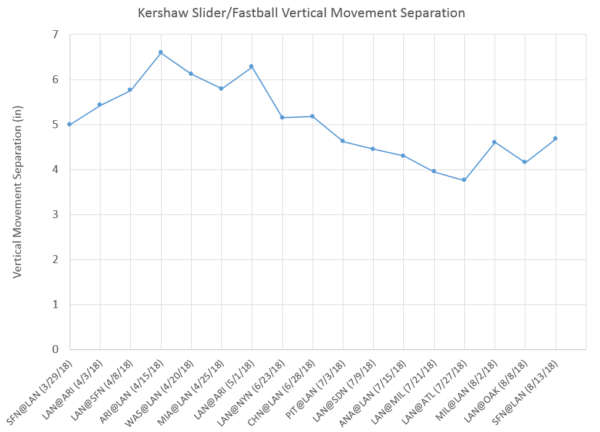 To put these numbers in context, Kershaw’s slider and fastball had an average of 8″ of vertical separation in 2016. Even as things start to tick back towards a bigger difference, which will help fool batters and cause them to swing over the top of the pitch, he has a long way to go to recapture his peak form. Even last night, Kershaw threw a lot of sliders that looked more or less like his fastball: 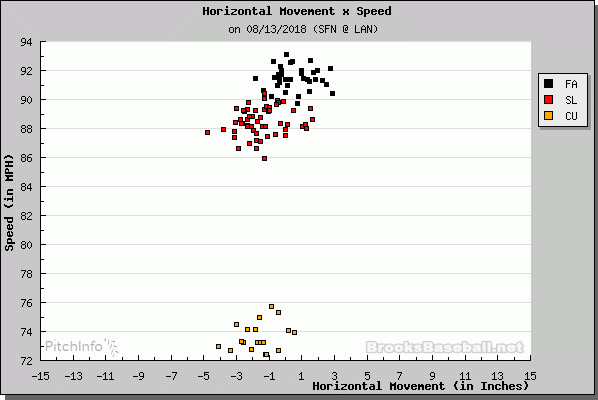 Instead, the difference-maker last night was command. Of the 55 sliders Kershaw threw, 44 were strikes. Kershaw wasn’t just throwing strikes, he was throwing good strikes, finding the bottom of the zone or good spots below it more frequently than he has in a long time: 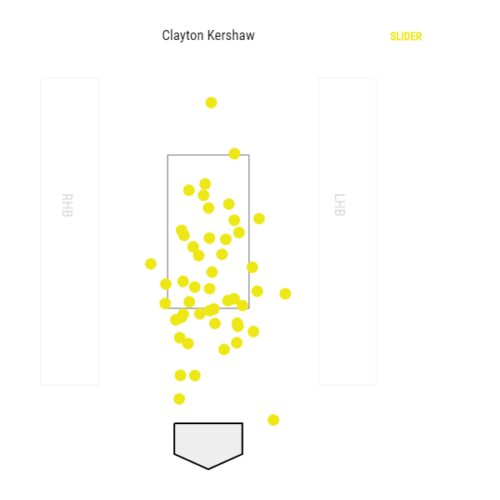 Here is where Kershaw got those swings and misses, mostly on his signature back-foot location to right-handed batters: 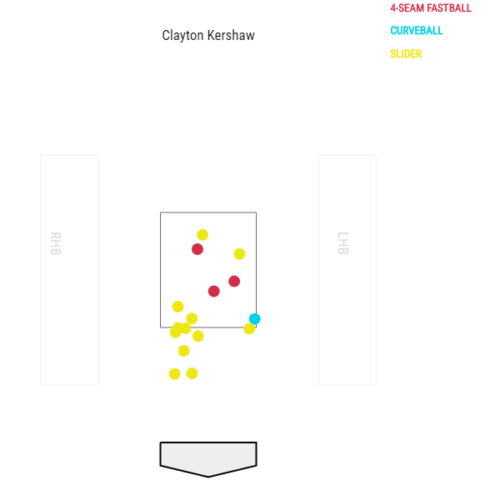 Last night showed what Kershaw can still do with a diminished fastball, not much curveball command, but excellent fastball and slider command. The Giant lineup is not very good, but last night was a good demonstration on how his decline has been overstated. After his most recent gem, Kershaw has a 2.47 ERA this season. After adjusting for park and league, that’s the fourth-best mark in the National League among pitchers with at least 100 innings. The peripherals aren’t the dominating numbers that they used to be, but he’s still really good.

Obviously, for the Dodgers to get to the playoffs, they need the bullpen to get their shit together. However, if they get there, they need Clayton Kershaw to be good. Last night’s stellar performance shows that he still has that in him. The trick is finding it more consistently.

Daniel Brim grew up in the Los Angeles area but doesn't live there anymore. He still watches the Dodgers and writes about them sometimes.
@danielbrim
Previous Giants 5, Dodgers 2: Bullpen does it again, Scott Alexander took his turn
Next Giants @ Dodgers Aug. 14, 2018: Please stop losing