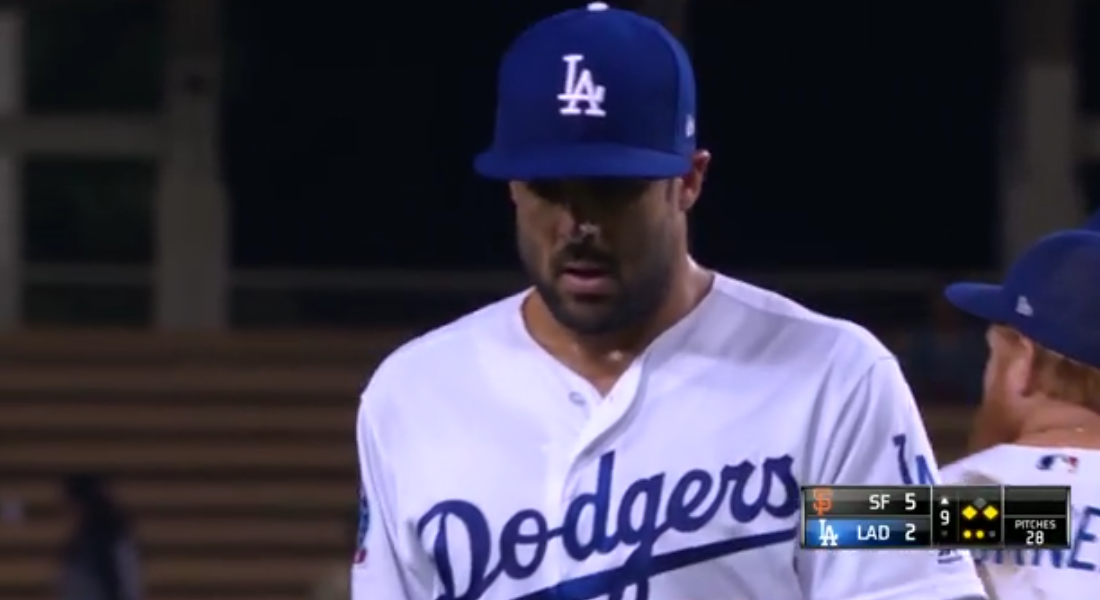 With the Dodgers reeling after three losses in a row to finish the Rockies series, they came home to Los Angeles and start the series with the Giants now 3-6 in their last 9 games. Unfortunately that poor form continued, as though the Dodgers held the lead through eight, the pen blew it again late by giving up four in the ninth for a 5-2 loss.

With the team struggling, who better to send to the mound than Clayton Kershaw? When they needed him most this year, he delivered. Kershaw threw 110 pitches over eight innings of one-run ball, allowing just four singles and walking none while striking out a whopping nine.

Of course, the most important thing about his start is the length of it (or at least it appeared to be) because of the current bullpen problems, and he essentially skipped over the struggling middle relief.

After three scoreless innings for both sides, the Dodgers finally got on the board in the 4th thanks to, who else, Kershaw. With two down, Austin Barnes singled to left, which didn’t seem to mean a lot with the pitcher coming up. However, Kershaw blooped a double to left between two Giants to plate a run for a 1-0 lead.

The Dodgers tacked on another run in the 5th thanks to Justin Turner hitting his 7th dong of the year to left-center, making it 2-0.

Boy does he look like the old JT now.

Kershaw did get in trouble in the 6th, giving up back-to-back singles to start to put runners at the corners with nobody out. However, he got a ground out, strikeout, and line out to escape the inning only allowing a single run to make it 2-1.

And that’s the way the score remained because the offense couldn’t manage to push anything else over the plate. That proved a problem as Scott Alexander was tasked to protect a one-run lead in the 9th. It simply didn’t go well, as he allowed four singles and Max Muncy made an error, giving up four runs (three earned) and blowing the game. Pedro Baez came in for the final out of the 9th and got a strikeout on three pitches. Just lol.

Honestly, people will criticize Dave Roberts, but I’m not sure what he’s supposed to do. He plays matchups, it doesn’t work. He trusts his best reliever on the year and it doesn’t work. There’s no real right solution at the moment when everybody has failed, and at some point the players have to execute.

Brian Dozier had an abnormal EKG. He will need further evaluation.

John Axford has a small fracture on the tip of his fibula. He will hit the disabled list.

The loss drops the Dodgers back to 64-56, though the Diamondbacks also lost so the NL West deficit remains one game.