Giants 2, Dodgers 1: A fight, Manny Machado comes through … and Kenta Maeda takes his turn to blow it 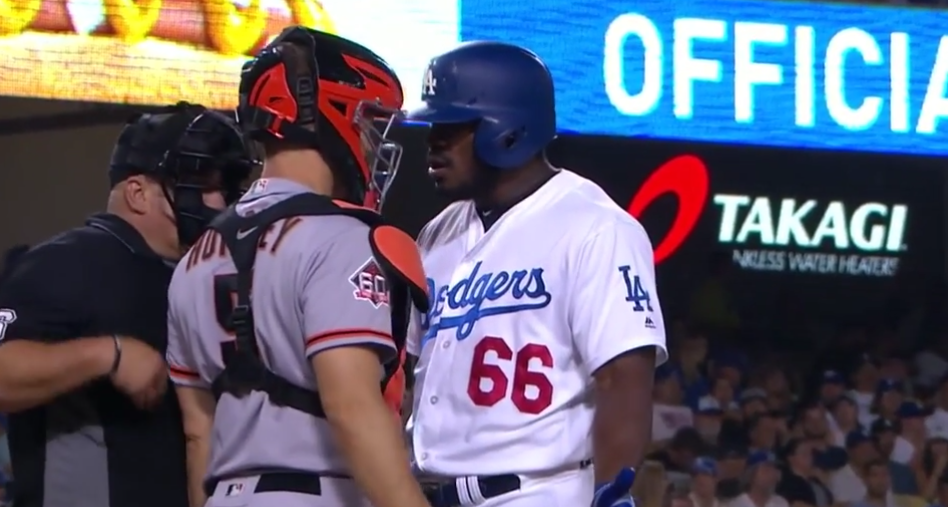 The Dodgers entered today’s game against the Giants losers of their last four, and despite the pen issues getting all the attention, another problem has been them only scoring 29 runs in their last 10 games. Well, things didn’t get much better today, as they were shutout through six frames and were limited to just one run. Still, it was the pen that ended up faltering late in a 2-1 loss.

Alex Wood came off the disabled list today, though he wasn’t really injured, so he figured to be fresh if not sharp. And that certainly seemed to be the case, as he gave the Dodgers five innings and 92 pitches. He allowed a single run to score in the 2nd when he hit a batter and allowed two singles, but that was it. Otherwise, he allowed just another single an a walk, while striking out six on the night.

It was a quality return as he continues to prove he can still be an effective mid-rotation option even with diminished velocity. It didn’t hurt that he had Manny Machado showing out behind him.

JT Chargois relieved him in the 6th, and he got four outs of his own, notching a strikeout and allowing just a walk. He too benefited from defense, this time from his old Twins teammate Brian Dozier.

Caleb Ferguson was next out of the pen with one down in the 7th, and he got two outs in a row include a strikeout, with him also benefiting from defense, this time Matt Kemp in left.

Offensively, things were bleak again, though they hit the ball hard. They actually didn’t blow a scoring opportunity where they had a runners on third and less than two outs or anything, but they did go with 1-for-7 with RISP.

The most exciting thing they did was have a fight when Nick Hundley took exception to Yasiel Puig‘s reaction after missing a pitch and a huge fight ensued.

Puig’s gonna get suspended, which sucks and hurts, but at least it was entertaining?

With two outs in the 8th, the Dodgers finally got something done. Justin Turner hit his third double of the night, and Machado ripped the first pitch he saw to tie the game.

That brought in Kenta Maeda in his new relief role, and wouldn’t you know it, he started by giving up back-to-back singles. Then to make things more excruciating, he got two outs and was close to getting out of it, before giving up the go-ahead single. That was it this time, instead of giving up four runs like last night but … yeah.

Appropriately, the Dodgers got a runner to scoring position in the 9th but couldn’t capitalize.

The Dodgers fall to 64-57 on the season and a pathetic 31-29 at home. They are now in third in the NL West, two games behind the Diamondbacks.