Mariners 5, Dodgers 4: An impressive comeback goes to waste as Floro hands over win on a balk

The Dodgers entered today’s game looking for a series win and a winning streak, so of course they weren’t going to get either. There were fireworks early and fireworks late, but in extras the Mariners prevailed after the Dodgers balked the winning run in and fell 5-4.

Coming off a string of excellent starts, Rich Hill surprisingly started disasterously today, giving up a walk, an infield single, and another single for a run. Then he surrendered the big blow in the form of a three-run homer to right from Kyle Seager. After that four-run explosion, Hill did manage to keep his team in the game, providing five shutout innings afterward.

Still, it was clear he didn’t have his best command, and he threw 111 pitches in six innings. That included five walks in addition to four hits, though he did strikeout eight and the stuff looked okay. 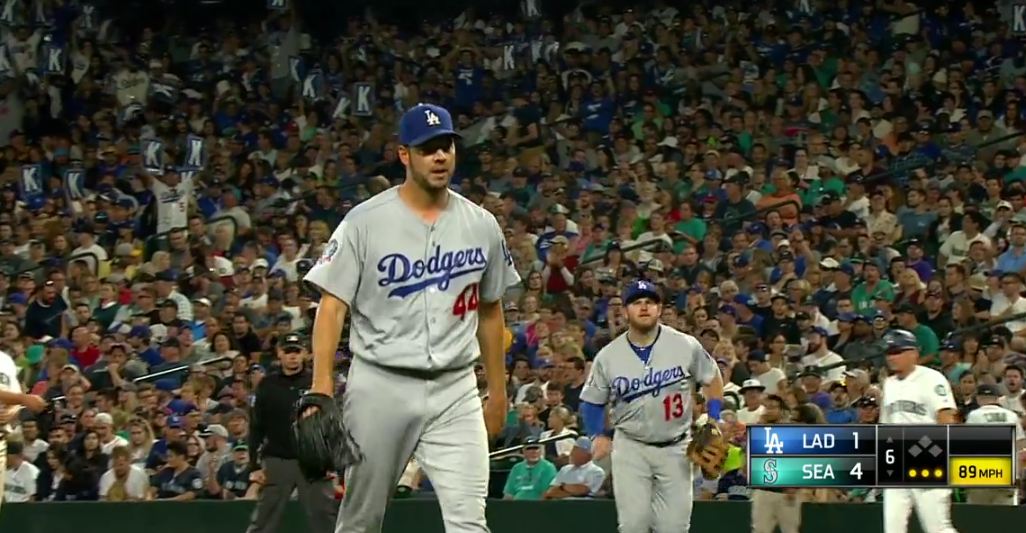 Surprisingly, it was the Dodgers who struck first in the 1st. Joc Pederson led the game off with a walk then eventually advanced to second, and Cody Bellinger came through with a two-out single to drive him in.

Up until this point it had been in extremely frustrating game offensively, as six balls (Machado: 3, Kemp: 2, Puig: 1) were hit hard (95+ MPH) and all found gloves, the most damaging of which came with the bases loaded in the 2nd when Machado drilled a liner to left and was robbed by a driving catch that prevented at least two runs.

Thankfully, after being shut out for five innings, tthe bats showed up again late. Justin Turner cut the lead to two in the 8th by homering to left for his 8th of the year.

Later in the inning, Bellinger absolutely annihilated a ball to right, his 20th dong of the year to cut the lead to one.

The pen at least managed to keep the Dodgers in the game. Pedro Baez came on in the 7th and got a 1-2-3 frame with a strikeout and two grounders. Scott Alexander followed in the 8th, doing his usual thing with a 1-2-3 inning that consisted of three ground outs.

The offense was up against it in the 9th, as they were facing MLB saves leader Edwin Diaz and things looked bleak. Well, except for Max Muncy, who worked a 3-2 count beautifully and then mashed a down-and-in fastball to right for his 28th dong of the year to dramatically tie the game.

That took things to the 9th, where Alexander remained in the game to face a lefty and got a foul out to left. JT Chargois then entered to get a righty, but he allowed an infield single on a roller that happened to be on the wrong side of the shift. After the Mariners went with a lefty pinch-hitter, Caleb Ferguson was summoned and immediately allowed an infield single of his own to put the winning run in scoring position. However, he rebounded by getting a routine fly out to center and then a bouncer up the middle for a force out at second to escape.

That took things to extras, where JT drew a walk to start the 10th and later stole second, but nothing came of it. The Dodgers continued on with Ferguson, who allowed a single, almost induced a double play, and then gave up another infield single before being removed for Dylan Floro. The alternative was going to Kenta Maeda now, but Floro is supposed to be the guy you want in to induce a double play, he just has to execute. Floro did not do that at all, as he issued a walk to load the bases and then balked the winning run in.

The loss drops the Dodgers to 66-58 on the year. The Diamondbacks lost as well, so the Dodgers remain just two games back in the NL West. However, the Rockies won so they are 1.5 games up on the Dodgers for second place in the division.

With the hottest team in baseball (Cardinals) visiting the Dodgers next, they could really use a vintage Clayton Kershaw performance tomorrow for a series win against the Mariners as he faces off against Roenis Elias.