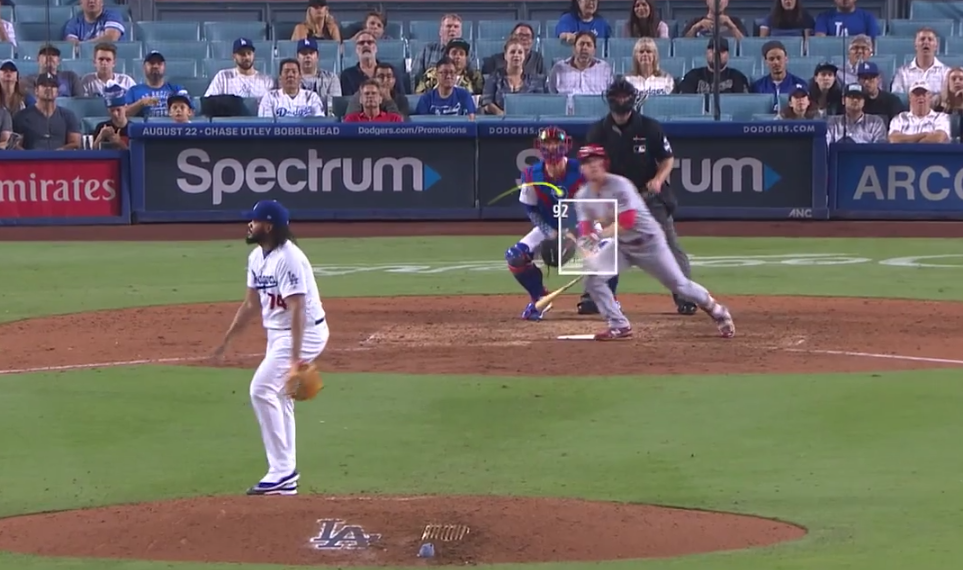 The Dodgers returned home tonight winners of three of their last four and coming off their first series win in August. They were rewarded by facing the Cardinals, who are the hottest team in baseball, and they won late with the long ball as the Dodgers fell, 5-3.

Alex Wood took the mound for the Dodgers and didn’t get off to the best of starts, as he was greeted by a Jose Martinez homer in the 1st that put the Cardinals up 1-0 early. After cruising through the next two frames, he wiggled out of a bases loaded jam in the 4th, which seemed like a big win at the time but ended up being foreshadowing. Wood’s 5th began with a double and then a single (that advanced to second on an error) to make it 2-0, a balk moved the runner to third, and then he issued a walk to put runners at the corners with nobody out.

That ended up being it for Wood after just 71 pitches and four innings. Could argue it was a bit early, but while he struck out four, he surrendered seven hits and walked two, and things seemed to be going south for him in a hurry. That brought on JT Chargois in relief, and after getting ahead 0-2, he issued a walk to load the bases with the last pitch missing high and away badly. That actually ended up bringing out the trainer, and Chargois was removed.

J.T. Chargois’ ailment is a “neck-arm combo,” Dave Roberts said. He will get an MRI tomorrow. He felt some “tingling” in the arm.

Pedro Baez? Oh yes, what could go wrong? Things certainly began grimly, as he immediately walked in a run to gift the Cardinals are 3-0 lead. However, he quickly rebounded, getting a strikeout, a foul out, and a strikeout to keep the game within reasonable reach.

That immediately paid dividends for the Dodgers in their half of the 5th, as Brian Dozier walked and Justin Turner doubled to get a threat started. Manny Machado then jumped on the next pitch to single cleanly to center to plate a run.

The lead was then cut further by Cody Bellinger, who hit a sacrifice fly to left to cut the Cardinals lead to one at 3-2. With Machado moving up to second on the play, and still just one down, the bats couldn’t push across another after a strikeout and a ground out.

Baez continued on in the 6th, and despite everybody’s worst thoughts, cruised through a 1-2-3 inning that included a strikeout. Next up was Kenta Maeda in the 7th and he looked sharp as ever, striking out two and getting a pop out in a 1-2-3 frame.

That seemed to buy enough time for the bats, as the Dodgers scratched for a run in their half of the 7th. Things started ominously with back-to-back ground outs, but Bellinger and Matt Kemp drew back-to-back walks, and Max Muncy worked a 3-2 count as a pinch-hitter before somehow singling to left on a 103-mph fastball down-and-away to tie the game, 3-3.

I think he can handle velocity.

At 103.0, the pitch Muncy hit for a game-tying single is the hardest pitch which has resulted in a base hit this year

After the Cards let Muncy steal second, Chris Taylor walked to load the bases, but Yasmani Grandal struck out with the bases loaded to end the threat. That was the theme of the night, especially with the game now deadlocked, as they also wasted a bases loaded and nobody out chance in the 1st as well as first and second with nobody out in the 4th. Sigh.

Maeda continued in the 8th and continued with his dominance, as he had an almost identical 1-2-3 inning as his previous, notching two strikeouts and then getting a pop-up. In their half of the 8th, the bats rallied again, with Yasiel Puig reaching on and infield single then advancing two bases to third on a wild pitch the catcher couldn’t find. However, a strikeout put the Cards on the verge of escaping, though a Machado intentional walk and being gifted second gave the Dodgers a chance to pull ahead by a couple. Unfortunately, Bellinger couldn’t get anything done as he reached for a ball and softly lined out to center.

That brought on the return of Kenley Jansen, who we have all been missing as the pen had been an absolute dumpster fire without him and now everything would fixed and … he gave up back-to-back homers to Jedd Gyorko and Matt Carpenter and the Dodgers were then losing 5-3. Jansen did get two strikeouts in the final four batters, but the two balls put in play were a lined single to center and a line out to center, so that’s less than ideal.

In the 9th, Kemp walked to start and bring the tying run to the plate, but he then rebounded to strikeout the side and ended it.

The Dodgers will try to rebound once again tomorrow at 4:00 PM HST/7:00 PM PST/10:00 PM EST on ESPN. Hyun-Jin Ryu will look to continue his great year against Daniel Poncedeleon.