Dodgers 5 Padres 4 : Dodgers walk off, but Kenley is broken again 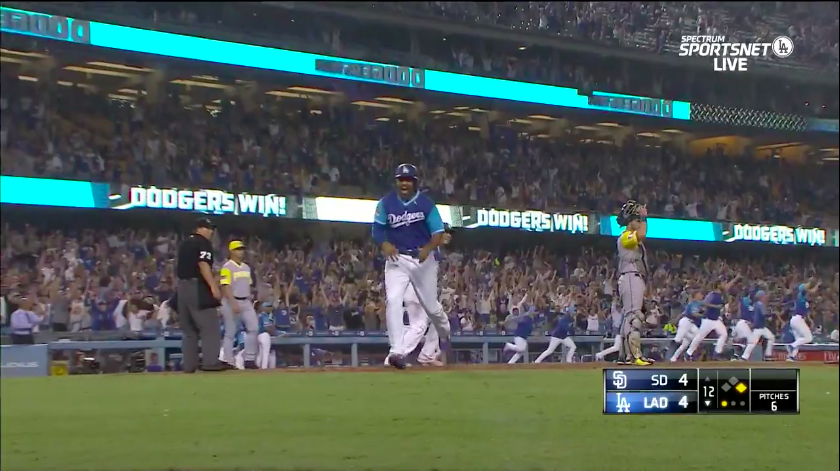 The Dodgers took the middle game of the series against the Padres after blowing a late lead. A power outage delayed the win, but the Dodgers won their second consecutive game and inch closer to the top of the NL West.

After Clayton Kershaw started the game with a 1-2-3 inning, Max Muncy led off the bottom of the first with a single to right. Brett Kennedy followed that up by hitting Justin Turner in the back, and Manny Machado drilled a three-run dinger to make it 3-0 before the Padres recorded an out.

Kennedy settled in to get the next three batters. Kershaw got two quick outs in the top of the second before surrendering a single to Austin Hedges. In the bottom of the second, Yasiel Puig knocked a one-out single. Puig stole second, and after Kershaw fouled out Puig stole third. However, Max Muncy struck out to end the inning.

Kershaw struggled a bit in the third, which started with a Manuel Margot double. He was bunted to third and scored on a Freddy Galvis single. Wil Myers singled to put runners on the corners, but Kershaw got a popout and a flyout to get out of the inning with only one run. In the bottom of the inning, Turner led off with a single but was left on base.

Kershaw threw a 1-2-3 fourth. After Yasmani Grandal flew out to the wall, Chris Taylor doubled down the third base line. Puig followed that up with a four-pitch walk, but Kershaw popped a bunt up for the second out. Muncy drew a walk to load the bases, but Turner flew out to the warning track to end the threat.

Kershaw and Kennedy exchanged 1-2-3 innings in the fifth. Kershaw went 1-2-3 in the sixth, giving him a string of 11 consecutive retired batters.

Through 6 innings tonight, Clayton Kershaw's ERA on the season is 2.35

Matt Strahm took over for Kennedy in the sixth. After the rough start, Kennedy settled in nicely and only allowed the three runs and five hits. Straham followed suit with a 1-2-3 inning of his own.

Kershaw’s streak was snapped in a loud way, as Franmil Reyes hit a towering homer on the first pitch of the seventh inning. Kershaw retired the next three in order to get through seven innings for his third straight start and the seventh time in his 20 starts this season.

In the bottom of the seventh, Kershaw led off with a weak single that bounced off the first base bag. He tried to stretch it into a double, but was thrown out pretty easily by Reyes.

Clayton Kershaw is very upset about his baserunning. pic.twitter.com/P2yhIstZbQ

I love Kershaw. I love the fire that he plays with. But if he ever slaps a base with his left hand again I will be extremely mad online.

Muncy followed up Kershaw’s adventure with a huge dinger to right center for his 30th homer of the year, tying him with Machado. Muncy and Machado have the same number of home runs. In The Year of Our Lord 2018.

Max Muncy is the 23rd different Dodger to hit 30 homers in a season. Overall, 50 seasons with 30 homers by Dodgers. https://t.co/FvNE8UgNwu pic.twitter.com/u5LRDI1vS3

Machado reached on an infield single, but was thrown out trying to steal second to end the inning.

Kershaw remained in for the eighth and got old friend A.J. Ellis to fly out for the first out. Galvis poked a single to right, and Myers hit a slow roller to short that Machado threw into right field to allow Galvis to move to third. Hosmer hit a grounder that Brian Dozier smothered for the second out, but Galvis scored to make it 4-3. The Dodgers finally got some luck, as Hunter Renfroe hit what was surely an RBI single. However, the ball hit Myers off second base for an inning-ending runners’ interference.

Good to see Chad hasn’t been hurricane’d away.

Cody Bellinger hit a single to lead off the bottom of the eighth, and took second on a bad throw by Renfroe. Dozier followed that up with a single to left, and he took second on the throw to keep Bellinger at third. The Dodgers Dodger’d pretty hard, as Grandal and Taylor struck out and Puig flew out to end the inning.

Kenley Jansen got the ninth, meaning Kershaw’s night was done after eight innings. He allowed two earned runs and seven hits while striking out nine and not walking a batter. Jansen struck out Reyes to begin the ninth, but Hedges hit his 11th home run of the year to tie the game at four.

Jansen got through the rest of the inning with the game still tied. He was not happy.

The Dodgers went down in order to send the game to extra innings. Kenta Maeda got the 10th and allowed a leadoff single to Travis Jankowski. After a popup, Maeda picked off Jankowski and struck out Myers to end the top of the inning. The Dodgers went in order after Machado missed a walk-off homer by a few feet foul.

Each team went down in order in the 11th. Caleb Ferguson worked a scoreless top of the 12th, and Matt Kemp pinch hit and led off the bottom of the inning with a walk. Enrique Hernandez laid down a sac bunt, then the power went out (I assume because God wanted to smite the Dodgers for bunting). After a 19ish minute delay, Turner blooped the first pitch into right for the walk-off single.

The Rockies won, but the Diamondbacks blew a late lead and the Mariners beat them in 10 innings. They are now tied for first in the West, and with their win the Dodgers now sit 2.5 back in the division. They wrap up the series with the Padres tomorrow, as Hyun-Jin Ryu faces Robbie Erlin. First pitch is at 1:10 PST. The win is good, but somebody please fix Kenley.