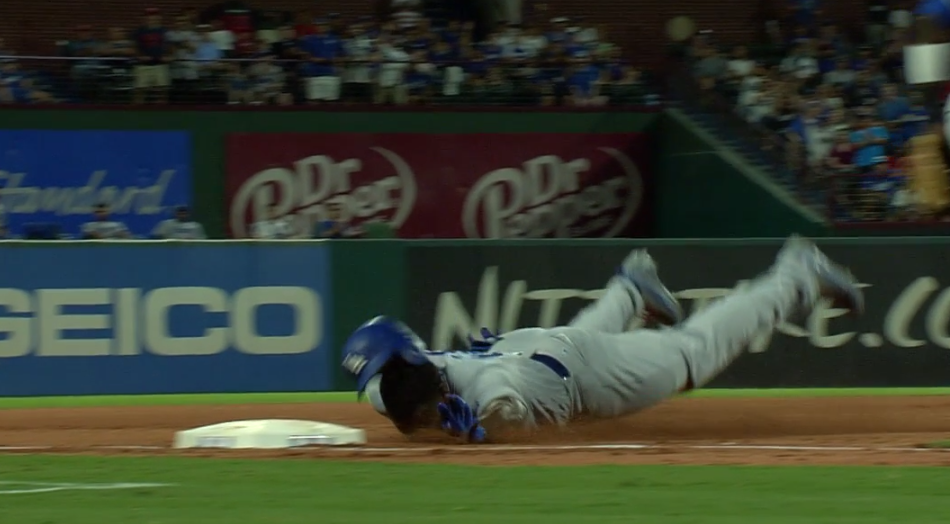 Thank you to Yasiel Puig for this amazing picture.

Anyway, the Dodgers played the second game of a quick two-game set against the Rangers in Texas tonight, and they entered it winners of four in a row and having beat the Rangers in all three games against them this season. Well, the Dodgers ended up getting the season series sweep and managed to extend their winning streak to five games thanks to the long ball and stellar pitching in a 3-1 victory.

While Alex Wood allowed three singles in the first two innings, he didn’t give up any runs, and then ran off three consecutive 1-2-3 frames. That was broken up in the 6th on a softly hit grounder to short for an infield single with the runner getting to second on a Chris Taylor error. However, he managed to get out of it thanks to a popped up bunt, a strikeout, and with a walk mixed in the middle. While he surrendered another walk in the 7th, Wood got through that inning without much drama as well, completing a stellar start.

Unfortunately, it was somewhat of a pitchers’ duel with opposing starter Mike Minor, who allowed just two hits and three walks in his six innings. Fortunately, both of those hits with dongs.

Cody Bellinger went yard in the 3rd with his 21st of the season.

So nice of @Cody_Bellinger to give those fans a souvenir. pic.twitter.com/0lx60JKIH8

Then Manny Machado started the 4th with his 32nd dong of the year and 8th as a member of the Dodgers.

Things got exiting again with two outs in the 7th, as Puig laced a triple into the gap and hilariously pounded his face into the ground diving into third.

As if that weren’t enough, he then tried a straight steal of home, but was out by a step or so. Honestly, it wasn’t that bad a time to try it.

In the 8th, on only the fourth hit of the night for the offense, the Dodgers went up 3-0 thanks to Yasmani Grandal smashing his 22nd dong of the year.

Then it was time for the pen, and Scott Alexander took over in the 8th. It was a thankfully clean inning, with a strikeout and two ground outs in the 1-2-3 frame.

With Kenley Jansen struggling mightily, Dave Roberts turned to Kenta Maeda to close this one out. Things got unnecessarily dramatic, as he surrendered two walks and a double that was good for a run, and let the winning run reach the plate. Good thing he eventually nailed it down for the save.

After everything that’s happened, the Dodgers are now 72-61 on the season and right in the thick of things. In the NL West, they are now a half game behind both the Diamondbacks (playing now) and Rockies (idle). In the Wild Card race, they are now just a game back of the Brewers (playing now).

Well, now comes the big test, right? The Dodgers will head home to Los Angeles for a four-game series against the Diamondbacks, and these head-to-head matchups are going to mean a ton. Everything starts with Rich Hill facing off against Robbie Ray at the usual 4:10 PM HST/7:10 PM PST/10:10 PM EST.