It’s clear Kenley Jansen hasn’t been his normal self since coming off the disabled list last week, which he was on because of his irregular heartbeat. Initial reports had him being out 4-6 weeks, but he only missed a couple weeks of action.

In each of his four outings since the DL trip, Jansen has allowed runs. Here’s his overall line in those four games:

That’s ugly. But it hasn’t been because of a dip in velocity. His cutter velocity before his DL stint was 92.89 MPH. After, it is 92.86 MPH. His slider velo is down a half-tick, but that’s no big deal. And his one walk issued in 22 batters suggests that his control is fine. His command, on the other hand, isn’t.

The second heatmap is definitely a small sample size (about 10 times fewer pitches than the first one), but it does show the big issue with Jansen’s command. He’s leaving a lot of pitches up and out over the plate. All four of the home runs have come off his cutter and, well, the location has been less than ideal. 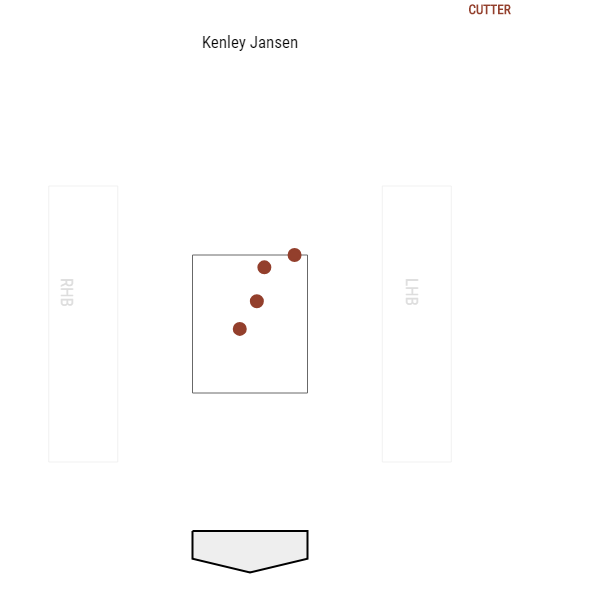 And it jibes with that second heatmap above.

Something I am concerned about is his heart. No, not his WILL TO WIN, his actual, physical heart. This is from Bill Plunkett of the Orange County Register:

“Jansen stopped taking the medication Sunday after giving up four home runs in three appearances last week. ‘I tried,’ Jansen said of pitching while taking the medication. ‘I thought the first day, maybe it would get better. Then the second day it was the same. And the third day… ‘After that, I just thought, ‘I’m going to hurt the team. I’ve got to say something and get off this medication.’ It might be making sure my heart doesn’t stop. But I told my doctor I can’t pitch like this.’ Jansen said his cardiologist wanted him to stay on the medication until after the season when he will undergo heart surgery for a second time to determine if another ablation procedure is necessary to address his irregular heartbeat. Jansen had the surgery following the 2012 season but doctors suspect the a-fib episode earlier this month was caused by additional heart tissue that needs to be cauterized.”

At least his doctor said it was OK for Jansen to go off the medication.

Since he first felt the symptoms in Colorado a few weeks ago, the No. 1 concern has been his health and well-being. Him not dying because of this has been and will always be the priority. I’m no doctor and I definitely trust that his doctor has Kenley’s best interest in mind, but damn if this isn’t a scary thought.

Then again, this is Kenley, the same guy who said this:

Kenley Jansen: “I’m not thinking about my heart…If it goes, it goes.”

Jansen wants to be out there competing. He wants a championship, even if it seems even less likely this season than it did last season. He wants to do what he can. I trust he isn’t putting himself in any serious jeopardy. Let’s just hope he can make it through the season with no more issues and he can get his mechanical flaws figured out. Of course, if he has another episode, then that might be it for his 2018. Again, baseball is secondary to his health.

As long as he’s healthy, he’s still the Dodgers’ best option out of the bullpen. He has struggled mightily in the last week-plus, but he has figured things out before, including earlier this year. Hopefully with his energy level returning to normal, he can get back in sync.

Dustin Nosler began writing about the Dodgers in July 2009 at his blog, Feelin' Kinda Blue. He co-hosted a weekly podcast with Jared Massey called Dugout Blues. He was a contributor/editor at The Hardball Times and True Blue LA. He graduated from California State University, Sacramento, with his bachelor’s degree in journalism and a minor in digital media. While at CSUS, he worked for the student-run newspaper The State Hornet for three years, culminating with a 1-year term as editor-in-chief. He resides in Stockton, Calif.
@DustinNosler
Previous Dodgers 8, Rangers 4: 15 hits from bats & 4 scoreless from pen, but Kenley continues to be a worry
Next Dodgers @ Rangers Aug. 29, 2018: Former teammates square-off