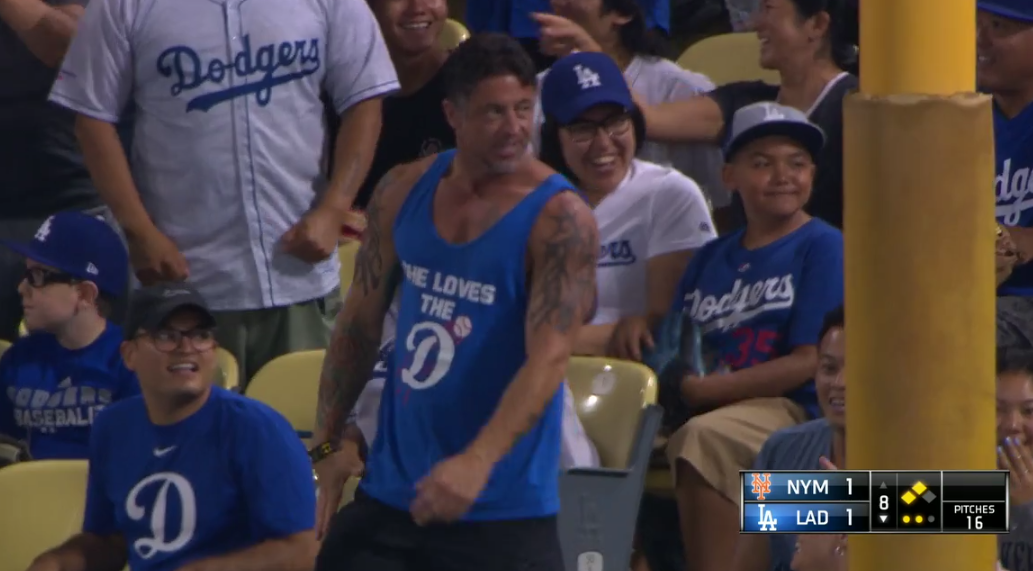 The Dodgers entered tonight as winners of eight of their last nine games, as well as their last three series, and possessing the lead in the NL West. They aimed to keep that going as they welcomed the Mets to town for a three-games series. This always seemed destined to be a low-scoring affair, and it was until a big blow late for the Mets led to the Dodgers taking a 4-2 loss.

Jacob deGrom started the game for the Mets, so it was always going to be a struggle for runs, and quite frankly I was just hoping they could drive his pitch count up to get him out of there as early as possible. Justin Turner wasn’t a fan of that plan, as he jumped on a fastball in the 1st and smashed his 12th dong of the year for a 1-0 lead early.

Unsurprisingly, deGrom wasn’t fazed. He allowed a runner to reach third in the 3rd inning, but that was about it. Other than JT’s homer, he allowed just one other hit and one walk, striking out six batters. The good thing is that they did drive up his pitch count to 109 after six innings, which knocked him out of the game.

Wood just can't give up any runs in this start, no pressure, man.

Alex Wood was given a tough task, and while he wasn’t at his sharpest, he induced a ton of weak contact. Some of those went for hits, and he gave up five in his five innings, but that generally limited the damage. He did surrender a single to deGrom that tied the game in the 5th, but that was it, as he also had two walks and three strikeouts in his 87 pitches.

Pedro Baez took over in the 6th and got a ground out to start, but allowed a bloop single before being removed. With expanded rosters, it was matchup time, and Zac Rosscup entered for a lefty. He certainly did his job, inducing a routine 4-6-3 double play ball, but Max Muncy bobbled it and was lucky to get one. Dylan Floro then relieved Rosscup and got a ground out to end the inning.

In the 7th, Scott Alexander was entrusted to maintain the tie. It was a bit of a tense appearance, as he labored through 24 pitches, loading the bases on a walk and two singles that were rather unlucky in nature. Still, he turned in a scoreless inning in the end, getting two ground outs and a strikeout.

The key chance for the Dodgers came in the 7th, as Alex Verdugo continued to look completely comfortable in the bigs, doubling to right-center field to start things. Cody Bellinger then followed with a jam-shot single to left to put runners on the corners with nobody out. Unfortunately, the Dodgers then did their Dodgers thing and Yasmani Grandal struck out while Yasiel Puig followed by grounding into a routine 6-4-3 double play.

Kenta Maeda then got the 8th, setting the Mets down in 1-2-3 fashion. In the Dodgers half of the inning, JT drew a two-out walk and Manny Machado laced a double down the line in right that would’ve scored JT … but it bounced over the short wall in the corner for a ground-rule double. That left it up to Enrique Hernandez to get it done, but all he could muster was a pop-up, and another rally was wasted.

With Kenley Jansen out after pitching in three straight games, Maeda was allowed to continue in the 9th. Things started ominously with a lead-off double, and that was later sacrifice bunted to third. He then hit the next batter and Brandon Nimmo deposited a hanging slider over the wall in right for a three-run bomb. Welp. That was it for Kenta, as Ryan Madson relieved him, and while he allowed a single he got out of it with a strikeout and a ground out.

Amazingly, the Dodgers got the tying run to the plate in the 9th. A single up the middle from Dugie started things, and Bellinger followed by lining a ball that hit the line in right. Initially it was called foul, but after review the umpires correctly called it fair and put runners at the corners. Grandal followed with a fly ball to center, which plated a run and made it 4-2, but didn’t change much about the situation. That brought up Matt Kemp, but unfortunately that magic was removed from today’s game, as he grounded into a 6-4-3 double play.

Seemed like an appropriate ending, as the bats went 1-for-7 with RISP.

The loss drops the Dodgers to 75-63 on the year, and it also drops them a half game behind the Rockies (won) in the NL West, though they remain a game ahead of the Diamondbacks (lost).

Rich Hill will take the mound tomorrow night looking to even the series against Jason Vargas at 4:10 PM HST/7:10 PM PST/10:10 PM EST.