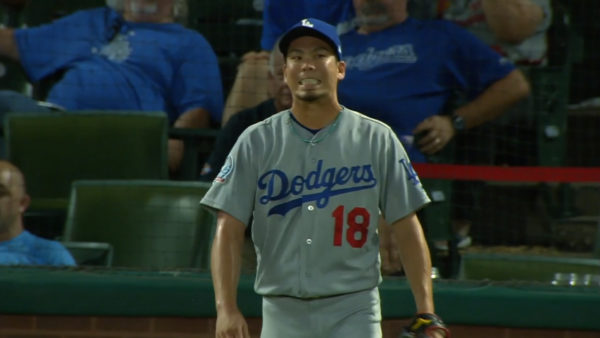 Wednesday’s game was one of the strangest of the season. Today was one of the weirdest in other ways, and definitely the most tense. In the end, the Dodgers managed to hang onto a 4-2 victory by the skin of their teeth.

Jon Gray got the start for the Rockies, and he was extremely wild. The Dodgers took advantage of his ineffectiveness early, with Manny Machado scoring on a first-inning double by Cody Bellinger and Yasiel Puig hitting the longest Dodger home run of the year (apparently) one inning later.

A trot around the park for the Wild 🐎. pic.twitter.com/qfm8O4MPbi

Other than that, though, the Dodgers missed a lot of opportunities against Gray. He walked five batters in just four innings, but none of those walks came around to score, thanks in part to some bad ball/strike calls by home plate umpire Andy Fletcher. The only time Gray looked to be in any sort of rhythm was when Max Muncy swung and missed at three consecutive back-foot sliders in the third. Gray’s final line was four innings pitched, two runs allowed, four hits, five walks, and four strikeouts. Considering that the Dodgers constantly had him on the ropes, there were definitely some missed opportunities.

The umpire’s strange night continued as Chris Rusin relieved Gray in the fifth. After Machado and Muncy led off the inning with more walks, Fletcher called a very strange balk. Even on replay the balk didn’t seem apparent, and Bud Black came out to argue the call and was ejected for his trouble. The Dodgers hit into two outs without additional damage (bringing in right-handed reliever Yency Almonte), and Nolan Arenado made a rare throwing error to allow the Dodgers’ third run. The play was reviewed, and on replay it looked very close to being a reversible call. However, the call stood and the run still counted. After the Dodgers plated a fourth run on a Puig Baltimore Chop single, the inning ended as Puig was caught on an ill-advised steal attempt with Kershaw at the plate. Kershaw led off the following inning with a double. Strange times all around.

Meanwhile, Clayton Kershaw pitched up to the occasion with yet another good outing. The only damage against him came in the second inning, with Matt Holliday hitting a homer on a Coors Field special, Ian Desmond hitting a double on a grounder just past the shortstop, and Drew Butera driving in Desmond with a jam shot grounder between first and second. Kershaw did have to deal with some other traffic which limited him to six innings of work, but two runs, six hits, seven strikeouts, and just one walk is a line you’ll take every time at this park.

Of course, this being Denver, and with Kenley Jansen out for the series, the late innings were full of drama. The Dodger offense squandered opportunities in the seventh and the ninth, so the bullpen had a slim margin to work with in three innings. The tying or go-ahead run came to the plate ten times in that span. That’s always scary, but especially so in Denver.

First, in the seventh, Caleb Ferguson allowed two baserunners and recorded two outs, though one runner on a “single” off of Brian Dozier‘s glove. While attempting to clean up the mess, Dylan Floro promptly walked Arenado, loading the bases for the red-hot Trevor Story. Story seemed to have Floro’s arsenal solved, fouling off both the slider off the outside corner and the big running fastball inside, but he eventually chased the seventh pitch of the at-bat (another slider) to end the frame with the tying run on second.

In the eighth, Ross Stripling came off the disabled list and was immediately thrown into the fire. No time for soft landings in a pennant race, I suppose. Holliday promptly greeted Stripling with a double, though in this case it was more good hitting than bad pitching, with the curve located at Holliday’s shins. Stripling and Scott Alexander combined to retire the next three batters to extinguish that threat.

Finally, the Dodgers bullpen had to fight through traffic in the ninth to close things out. Somehow-Dodger-killer Chris Iannetta led off the inning with a single off the right field wall, causing yet more anxiety. The inning began to turn as Alexander was bailed out of his wildness by Fletcher (if you’re an umpire mentioned three times in a recap, that’s probably not a good thing). Of six pitches to Charlie Blackmon (none of which he swung at), zero were on the plate. The final strike was particularly egregious, but the result turned the Dodgers’ fortunes. Kenta Maeda managed to close the door, requiring 15 pitches (12 of which were sliders for some reason) to put Dodger fans’ anxieties to rest for the evening after a four-hour roller coaster ride.

That'll do, Kenta. That'll do. pic.twitter.com/SuxIZt2Wfc

After today’s wild win, the Dodgers have moved to within half a game of the first-place Rockies. This win was particularly important, with Kyle Freeland (who will likely finish in the top five in Cy Young voting) slated to pitch tomorrow. Freeland’s opponent Walker Buehler isn’t bad in his own right, though he will need to provide some length if the game is close again. First pitch is scheduled for 5:10 PDT.