After winning the first two games of what might be the most important series of the year, the Dodgers look to secure a series win this morning against the St. Louis Cardinals. Walker Buehler pitched the best game of his young career last night striking out nine over eight scoreless allowing only two hits. While that was happening, Chris Stratton threw a two hit complete game shutout against the Rockies. The Dodgers (81-67) are now tied with the Cardinals in the second wild card spot, and half a game behind Colorado (81-66). Rich Hill will take the mound today against 26 year-old John Gant. Welcome to game 149.

Hill and Gant have both been pretty good this year. Neither has been super overwhelming this year, but both have been better as of late. Here’s how they compare out of 130 pitchers that have logged 100 innings: 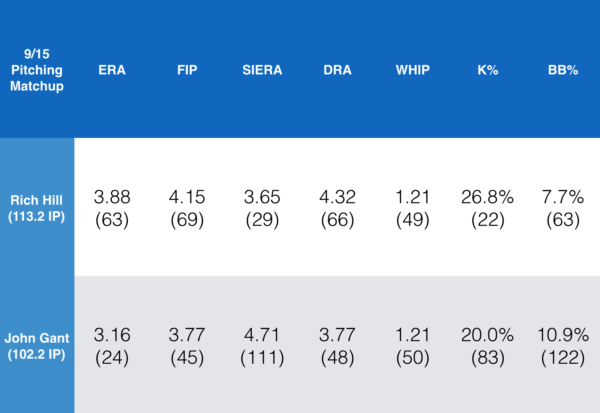 Chad is remaining positive with 14 games to go. At the same time, it is impressive that three of the six Dodgers minor league affiliates won their respective league championships.

Feel like it would be pretty funny if the big league club were the only team in the org not to make the playoffs. https://t.co/7xys4LbGUi

John Axford and Tony Cingrani are rejoining the team ahead of the next series against the Rockies. It’s just my opinion but with Kenley Jansen having a down year, health permitting Cingrani would’ve easily been the best reliever on the team. We’d have a better record in one run games with him. Hopefully he has a chance to contribute down the stretch.

#Dodgers Dave Roberts said both John Axford and Tony Cingrani will join the team when it gets back to LA and be activated. How/when they are used remains to be determined.

The Rockies are going to have to face the Dodgers three best starters next week in the most important series of the year.

Just a guy living in Southern California, having a good time writing about baseball. Hated baseball practice as a kid, but writing about it rules. Thanks for reading!
@AllanYamashige
Previous Dodgers 3, Cardinals 0: Walker Buehler strikes out 9 over 8 shutout, Yasiel Puig has 2 dongs
Next Dodgers 17, Cardinals 4: Three Puig dongs move the Dodgers into a tie for first