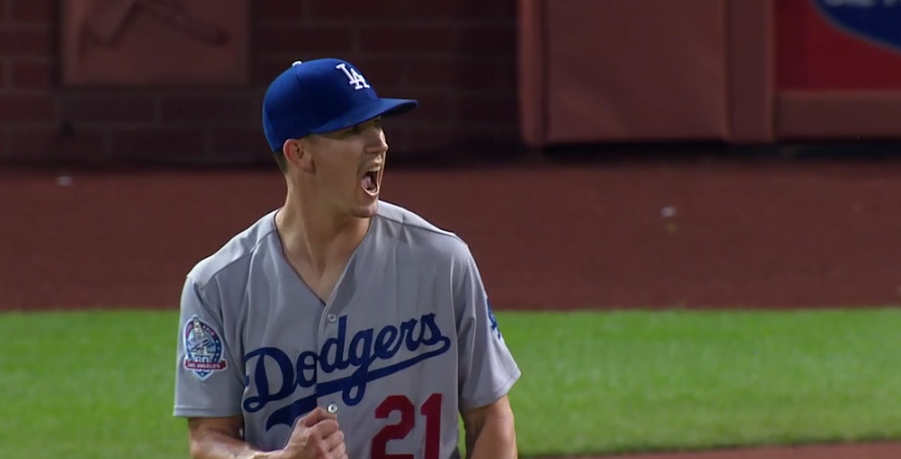 After getting the pivotal four-game set with the Cardinals started the right way with a win in the series opener, the Dodgers had the chance to pull even in the race for an NL Wild Card playoff spot. It was a game filled with tension and it certainly had a playoff atmosphere to it, so it was nice to see a truly special starting performance power the Dodgers to a 3-0 shutout victory.

Walker Buehler had never pitched into the 8th inning as a professional, but in a game where the Dodgers desperately needed a quality performance against a tough playoff team, he not only did that but gave one of the best performances of his career.

Buehler was dominant from the start, as he was perfect through the first 13 outs of the game before Paul DeJong broke it up in the 5th. The rest of the way, he allowed just an infield single and two walks, striking out eight batters in his 105 pitches.

His ERA is now 2.88 and Buehler is more present than future.

Wasted a first-round pick on a guy who needs TJS. #FuckingJoke

On the other side of things, Jack Flaherty took the mound for the Cardinals and he made sure hitting with runners in scoring position wasn’t the biggest concern for the offense today. They had just two chances against him and they weren’t quality ones either, with one coming in the 1st with runners at the corners and two outs and one coming in the 5th with a runner at second and two outs.

Flaherty got through six innings, striking out eight batters and allowing just four hits and two walks in his outing. Fortunately, he did give up a single run. With one down in the 2nd, Yasiel Puig worked the count full and on the 9th pitch of the at-bat, pummeled his 17th dong of the year to left-center for a 1-0 lead.

The offense started their campaign against the Cardinals pen in the 7th with Cody Bellinger getting hit by the pitch and Puig singling. Chase Utley then pinch-hit for Enrique Hernandez, which I thought was an odd move, but it worked out alright after Utley’s deep fly to left-center moved both runners up. Still, after Buehler struck out, the rally looked dead in the water. However, the first pitch to Joc Pederson crossed up Yadier Molina to score Belly, though Puig was thrown out trying to score after a wild throw. Either way, it was 2-0 in favor of the Dodgers.

With the Dodgers needing insurance in the 9th, Puig stepped up and continued his big day by launching his 18th dong of the year to left, his third hit and second homer of the night. Notably it was off a lefty, who he has struggled to hit recently, and he apparently wants more playing time.

Anyway, Kenley Jansen was shaky last night, barely escaping with the win after being staked to a four-run lead. Tonight he was asked to save a three-run lead, and things started ominously in terms of his sharpness as he hit a batter that he was ahead of 0-2 in the count. Thankfully that was only a blip, as he got the next three batters in a row, finishing with a strikeout.

The victory improves the Dodgers to 81-67 on the year, moves them to one game behind the Rockies (playing now) in the NL West and into a tie with the Cardinals for a playoff spot. I’m enjoying the nervousness but also not.

Tomorrow’s game is far too early as the Dodgers go for the series win against the Cardinals at 7:05 AM HST/10:05 AM PST/1:05 PM EST, with Rich Hill taking the mound against John Gant in what appears to be a relatively even matchup despite the numbers.