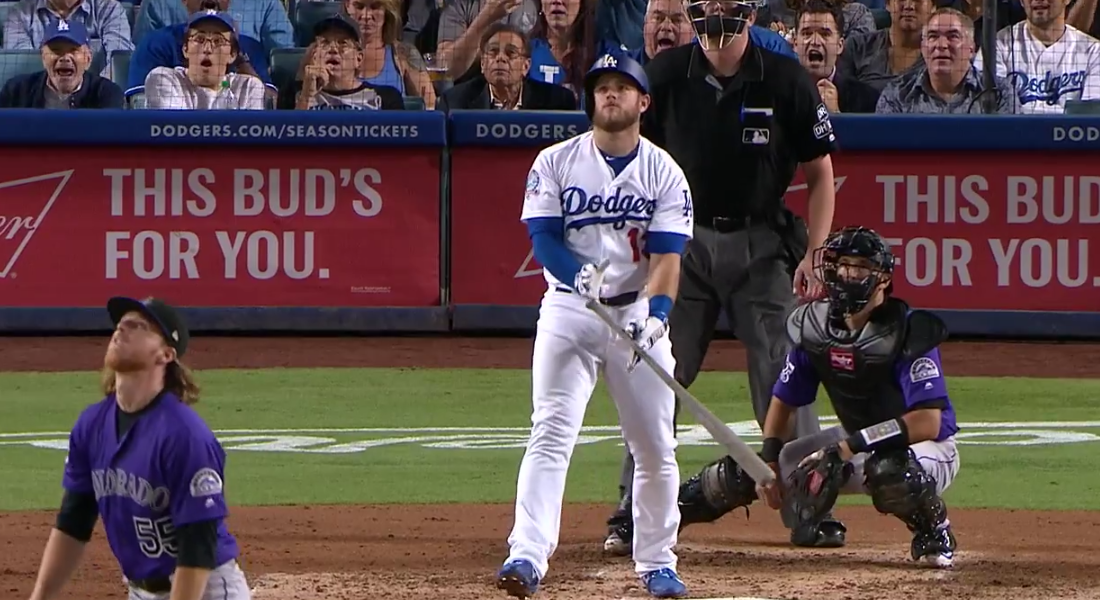 The Dodgers have been a bizarre team of late, as their last five series have been wins against the Diamondbacks, Rockies, and Cardinals, with losses against the Mets and Reds. In the most important series of the season against the (formerly) division-leading Rockies, the Dodgers seized control of the NL West thanks to the bats exploding early and the pitching coasting in a 8-2 victory.

The Dodgers bats will start the recap off since they started the scoring off in the 1st, as Joc Pederson went oppo for his 22nd dong of the year to start things off right.

How do you kick off a big series?

Two outs later it looked like that would be it, but Max Muncy worked a walk and Yasiel Puig followed by muscling a single to put runners on the corners. Then Cody Bellinger worked another walk, and the ball got past the catcher to score Muncy, but Puig was … rather foolishly thrown out trying to take third to end the threat.

Early on that seemed like it could’ve come back to haunt them, but thankfully they made it a distant memory. In the 3rd, Joc started things with a double, Justin Turner followed with a single to put runners at the corners, and Manny Machado drove in a run with a blooper into center. Muncy then blew the game open by bombing his 33rd dong of the year to right, and it’s hilarious to me that he has the most swag on the team now.

The bats continued to pile on the 4th, as Hyun-Jin Ryu drew a walk to start and Joc followed by tomahawking his second dong of the game and 23rd dong of the year (off a lefty!) to make it 8-0.

That was more than enough for Ryu, as he was stellar tonight in his most important start of the season. He threw 93 pitches over seven shutout innings, striking out five while walking none and giving up just four hits. Of those hits, only two were clean singles, the others being an infield single against the shift and Joc misplaying a routine out into a double.

Joc made up for the mess later, when he made a nice catch and pulled a Manny Ramirez, giving a fist bump to a fan.

Alex Wood took over in the 8th, making his debut out of the pen in 2018, and things did not go great. He got two outs but gave up a walk, hit a batter, and had a single score a run before being removed. John Axford entered to close out the 8th, but gave up a bloop single to score another run (charged to Wood), getting out of it thanks to Bellinger throwing a runner out at third (down six, really?).

To finish things off in the 9th, the ball was given to Yimi Garcia, who issued a walk, but got two outs. He was removed to get Tony Cingrani time in a game, and he caught a liner back to him to end things.

This is a decently important series.

The shirt, it is good.

The victory gets the Dodgers to 83-68 on the season and 40-36 at home. They now take a half-game lead in the NL West over the Rockies.

Dave gonna run out some platoon bats tomorrow and they'll do worse because it's Freeland, and people are gonna freak out. Looking forward to it.

4:10 PM HST/7:10 PM PST/10:10 PM EST is the start time of the marquee matchup of the series, with Clayton Kershaw and Kyle Freeland facing off. Definitely basically a playoff series.