Dodgers 5, Rockies 2: Puig comes through with a big dong late, Buehler strikes out 12 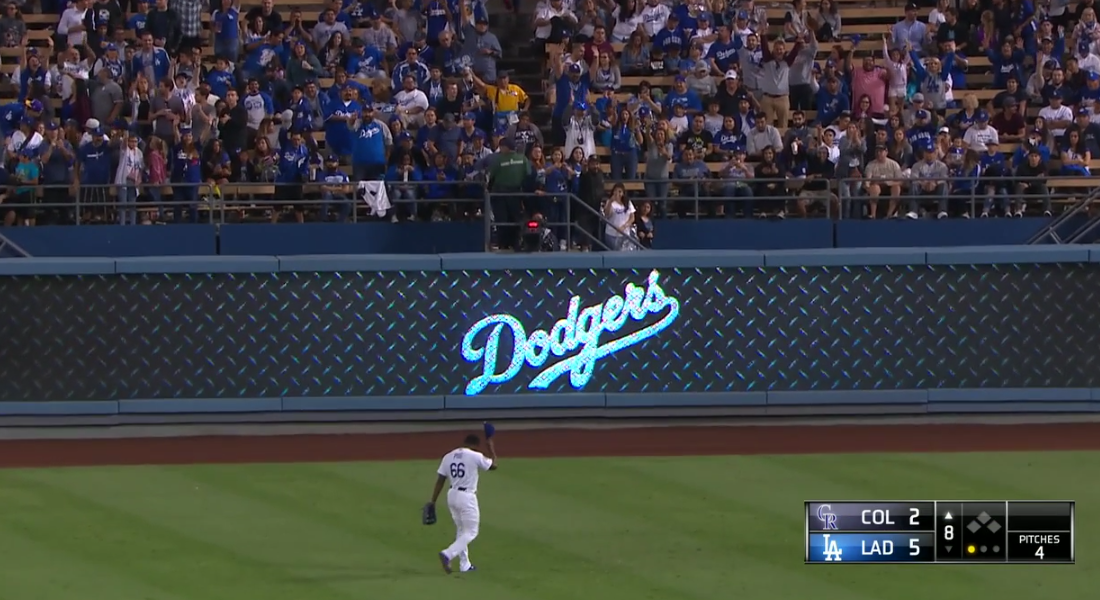 Winners in six of their last seven and with a chance to sweep the formerly division-leading Rockies, the Dodgers put together magic late again in a 5-2 victory, but they were only in it to begin with because of stellar pitching despite continued defensive miscues.

Coming off the best start of his career, Walker Buehler got into immediate trouble in the 1st, as he allowed a single, Justin Turner‘s throw on a ground-ball chopped to him got away at first for an error (Cody Bellinger should’ve handled it, honestly), and he walked a batter to load the bases with nobody out. Buehler then rebounded to get a strikeout and a force out at home on a comebacker, putting him on the verge of getting out of the mess unscathed, but an Ian Desmond sharp single up the middle plated two runs (both unearned). Buehler was able to end the inning with a strikeout to escape disaster, but his pitch count was already up to 36.

No matter, because he threw just 65 pitches over the next five innings, giving up only a single, a hit by pitch, and an error committed by himself on a comebacker after the 1st. All told, he got through six on 101 pitches, surrendering just two runs (none earned) on three hits, a walk, and a hit by pitch, striking out a career-high 12. A composed, veteran performance you’d expect out of prime Clayton Kershaw, honestly.

On the other side, the Dodgers got on the board with one out in the 2nd, when Matt Kemp cut the lead in half thanks to a towering dong to left, his 20th of the season.

.@TheRealMattKemp crushed that ball so hard the outfielder didn't even flinch. pic.twitter.com/qsbcU2bIj7

They then tied it in the 5th behind a sharp Enrique Hernandez single to left (who finally got rewarded for hitting the ball hard of late) and a one-out double to the gap in left-center by Brian Dozier.

The pen was again needed to buy time for the offense, and things started off well in the 7th. Pedro Baez got his one batter to lazily fly out to right. Caleb Ferguson then entered and got a strike out and a ground out to move things along.

That was enough time, as the bench emptied against right-handed reliever Scott Oberg. With one down, Max Muncy drew a walk and Yasmani Grandal followed by doubling down the line in right. That brought up Yasiel Puig, the reigning NL Player Of The Week, who didn’t play yesterday and got his house robbed for like the 1000th time. Distracted? Nah, all he did was take a slider off the plate down-and-away and park it over the fence in center for his 22nd dong of the year, a three-run shot that would put the Dodgers up 5-2.

Oh god, are they back? My body is ready.

THE SHIRT HAS BECOME REALITY YET AGAIN

The pen did the rest of the work. Kenta Maeda looks back on his relief grind, getting two strikeouts to start the 8th before giving up a roller down the line in right for a single. He got removed for whatever reason, which seemed pointless, but didn’t matter since the pen is rolling now and Scott Alexander entered and got a routine grounder to end the frame.

Kenley Jansen got the 9th again, and he cruised this time by inducing a bouncer, getting a strikeout, and a fly out to seal the deal.

My feelings about the Dodgers right now versus my feelings when I think about how the Dodgers are even in this situation pic.twitter.com/um0Hx5ZTRc

Hey Doc, what do you think of Death of a Salesman? pic.twitter.com/GSwjMUPjFG

The Dodgers improve to 85-68 on the season and are now 42-36 at Chavez Ravine. Most importantly, they are now 2.5 games up on the Rockies in the NL West.

They have a day off tomorrow before welcoming the Padres to Los Angeles at 4:10 PM HST/7:10 PM PST/10:10 PM EST. I’m nervous since their last two series losses have come to the Mets and Reds, but the Dodgers will try to avoid screwing this up with Rich Hill going against Eric Lauer.