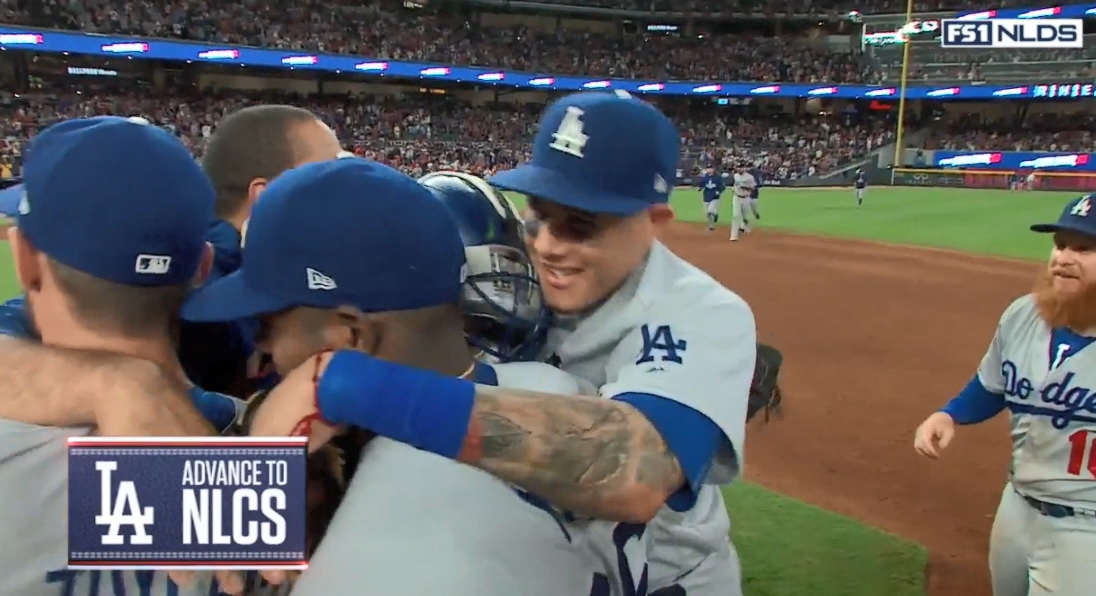 Game 3 was a frustrating one for the Dodgers as they failed to complete an NLDS sweep of the Braves thanks to a rough inning from Walker Buehler and continuously failing to take advantage of chances at the plate. However, the Boys In Blue had another chance to close the series out in Game 4, and after an intense affair for more than half the game the Dodgers finally separated themselves in a 6-2 victory.

Brewers against the Dodgers in the NLCS, baby.

Things started out better in Game 4 for Mike Foltynewicz than they did in Game 1, as he retired the first two batters in the 1st. However, Max Muncy drew a four-pitch walk and Manny Machado followed by jumping on the first pitch and ripping a double down the line for a 1-0 lead.

That lead was constantly under threat, as Rich Hill pitched through a lot of traffic today. In both the 1st and 3rd, he escaped first and second with two outs, but he wasn’t so lucky in the 4th. After back-to-back walks to start things, they were successfully sacrificed to second and third, but Hill rebounded by getting a grounder to third for the second out. However, pinch-hitter Kurt Suzuki followed with a flared single into left center to drive in two runs and give the Braves the 2-1 lead. Hill eventually got out of it, but the damage was obviously done.

Hill didn’t make it much further than that. With one out in the 5th, he gave up an infield single that Justin Turner couldn’t glove, followed with a walk, and then seemed to induce a routine 6-4-3 double play … except Manny booted it at short to load the bases. That ended his night after 4.1 innings and 82 pitches, and he surrendered four hits and a whopping five walks while striking out three, though he did only surrender two runs. His struggles were partially because of leaving pitches in the middle of the plate, but a lot of it had to do with not getting the corners on curves or fastballs up in the zone.

Well, at least Dick Mountain did this.

Of course, the reason he only surrendered two runs was because of the excellent work of Ryan Madson. He entered in a hell of a jam trying to prevent things from getting worse, and he settled everything down by inducing a pop foul to the catcher and a pop out to short. Absolutely massive effort to keep things at 2-1.

Still, the Dodgers had managed just a run, thanks in part to failing to score in the 2nd with runners on second and third and two outs as well as the 4th with runners on first and second with two outs. But after Jonny Venters pitched a scoreless 5th in relief of Folty, he ran into trouble in the 6th. Enrique Hernandez managed a single, but Venters also got two outs. However, a Yasiel Puig bloop to the right side managed to fall in and put runners at the corners to extend the inning.

That brought on Brad Brach to face pinch-hitter David Freese, and during the at-bat Puig took second without a throw. Immediately that paid off as Freese came up with yet another big postseason hit with a single up the middle to drive in two and give the Dodgers a 3-2 lead.

Max Fried entered to get out of the 6th, but the Dodgers now were in the driver’s seat. Pedro Baez was tasked to get the Braves in their half of the inning, and he continued to be … dominant? He got a 1-2-3 frame on just 10 pitches and continues to cruise.

In the 7th against Chad Sobotka, the Dodgers managed to put some breathing room between them and the Braves. JT singled, Muncy walked, and Manny followed by absolutely crushing a ball to left for a three-run dong and a 6-2 lead.

Welcome to Atlanta, where the players play. pic.twitter.com/OM5RCpw757

Manny Machado stared at that ball long enough to blow a bubble, and only then did he drop his bat. pic.twitter.com/KrBnT37IjP

Later on, Enrique walked and then with two outs stole second, but Julio Teheran managed to make sure things didn’t get worse for the Braves. On the other side, Baez continued on in the 7th and got a ground out before being removed, making it four consecutive outs for him. Then Dave Roberts finally turned to Caleb Ferguson, who ended a 1-2-3 inning with a ground out and line out.

The bats were quiet against Teheran in the 8th and A.J. Minter in the 9th, which left things up to the pen and a four-run lead. Kenta Maeda got a strike out and a ground out to start the 8th, but then made things dramatic with back-to-back singles. While I would’ve gone with lefty Scott Alexander for pinch-hitter Lucas Duda, Dave stuck with Maeda, and though Duda almost hit a massive three-run dong, he eventually got him to fly out.

Of course, that moved things to the 9th for Kenley Jansen, who inspired a lot of confidence with a grounder and two strikeouts against the top of the order to clinch it.

The win gets the Dodgers a 3-1 series victory over the Braves in the NLDS and a date with the Brewers in the NLCS, which starts Friday.

"A highly rational Internet troll." - Los Angeles Times
@ChadMoriyama
Previous Dodgers @ Braves October 8, 2018: NLDS Game 4
Next Dodgers are going to the NLCS yet again and celebrate that, but clearly have sights set higher