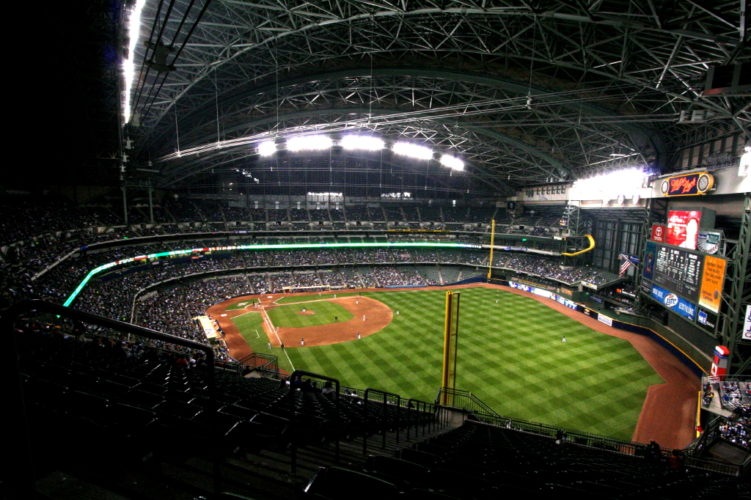 The Dodgers picked an interesting time to play arguably their worst game of the season. Clayton Kershaw recorded nine outs and got no help from his defense, as three errors and two passed balls helped run his pitch count up. Only one of the five runs the Brewers scored off Kershaw was unearned, but Yasmani Grandal had a horrid game behind the plate. This isn’t to excuse Kershaw, as he was extremely hittable and gave up a home run to a relief pitcher.

It was an all around team loss, but I’ll put on my shill hat really quickly. The Dodgers showed some fight and had the tying run at third base with two outs in the ninth. They forced Milwaukee to use their important relievers. They showed they could hit Corey Knebel, Jeremy Jeffress, Joakim Soria and Xavier Cedeno, scoring four runs on five hits during their combined two innings of work. They did not show that they could hit Josh Hader, but Hader tossed three innings and is reportedly unavailable today. Lose the battle, win the war or something.

Hyun-Jin Ryu gets the ball for the Dodgers. He started Game 1 of the NLDS and dominated the Braves, allowing four hits in seven innings while striking out eight. Ryu saw his most success at home, so it wasn’t a shock to see him do that at Dodger Stadium. However, now the Dodgers need a big performance out of Ryu on the road. Ryu made six starts this season away from Dodger Stadium, and his numbers were closer to mediocre. In 27 2/3 road innings, Ryu posted a 3.58 ERA. Despite throwing nearly twice as many innings at home, Ryu allowed more earned runs, walks and home runs on the road than at home.

If you want to focus on Kershaw’s postseason struggles, you have to like Ryu’s track record in the postseason. Today will only be his fifth playoff start. In his first playoff start, Ryu allowed four runs in three innings. Since then, he’s allowed one run in 20 innings. His most recent start was his first since 2014, so it’s tough to put too much stock into this.

Ryu has only seen the Brewers once in his career. On May 22, 2013, Ryu allowed two runs in 7 1/3 innings at Miller Park in a 9-2 Dodger win. This is definitely a stat that means a lot for today, as the Brewers lineup featured Jeff Bianchi and Yuniesky Betancourt.

Miley made 16 starts for the Brewers this season and didn’t allow more than three runs in any start. He posted a career-best 2.57 ERA and his second-best FIP (3.59). He also posted his worst strikeout rate since his rookie year, at 14.8 percent. Miley was helped by a .269 BABIP, by far the lowest of his career. Miley only surrendered three home runs in his 16 starts, and each came in a span of three games.

Miley pitched six or more innings only six times this season, but that includes both of his starts against the Dodgers. On July 20, Miley allowed four hits and one unearned run in six innings, but the Dodgers scored five runs in the final three innings for a 6-4 win. On July 31 at Dodger Stadium, Miley allowed two hits in seven innings and outdueled Walker Buehler in a 1-0 Milwaukee victory.

The Dodgers opt for an all-right handed lineup today. Austin Barnes gets his first start behind the plate since September 23rd. With a day game after last night’s game and Grandal’s struggles to catch the ball, that makes sense despite Barnes’ season-long struggle. Cody Bellinger sits in favor of Yasiel Puig, who starts in right and pushes Matt Kemp to left and Chris Taylor to center. The Dodgers will have Bellinger, Grandal, Max Muncy and Joc Pederson available to hit late, and the Brewers won’t have Hader to counter. The Brewers have a couple changes in their lineup, with Travis Shaw starting at second. Erik Kratz starts behind the plate after Manny Pina took a beating last night.

#Dodgers Dave Roberts: “Yazzie had a tough one last night but it’s not the reason he’s not in there tonight.” Cited Austin Barnes work with Ryu and history v Miley for start. Grandal could play tonight, will start Game 3

I've been writing about the Dodgers since I graduated from Long Beach State, where I covered the Dirtbags in my senior year. I'm either very good or very bad at puns.
@@ac3581
Previous Brewers 6, Dodgers 5 – NLCS Game 1: Kershaw delivers shortest postseason start, rally falls short
Next Dodgers 4, Brewers 3 – NLCS Game 2: Turner comes up with big dong late to tie up series