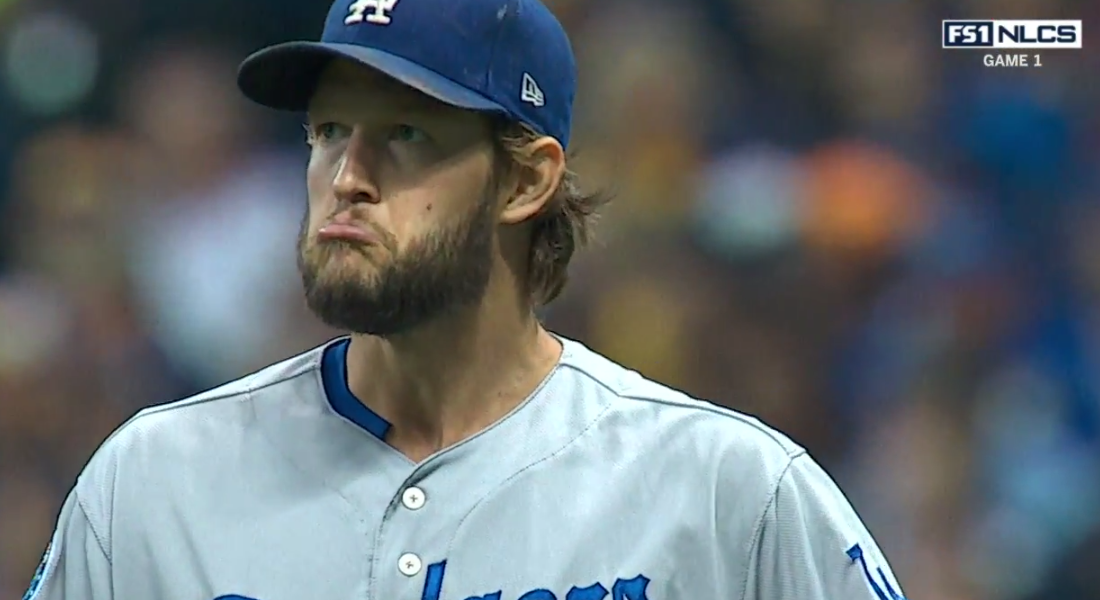 The Dodgers started what figured to be a strategic war of an NLCS against the Brewers, and while that certainly seemed to be playing out initially, a lot of the bite and tension of the moves was removed once the Dodgers started to poop themselves in earnest. However, the Dodgers did manage to mount a late rally to make it close, but they eventually fell in a 6-5 loss in Game 1.

Clayton Kershaw took the mound coming off his eight shutout innings in Game 2 of the NLDS, and he was stressed immediately by the Brewers. Lorenzo Cain reached on a single and advanced to second on a passed ball to start things in the 1st, but Kershaw managed to retire the next three in order, though putting Christian Yelich away did require 10 pitches.

Gio Gonzalez was essentially the first reliever in the game for the Brewers, and he got a 1-2-3 frame in the 1st. However, in the 2nd, Manny Machado started things by working a 2-0 count and then lining a changeup over the wall in left-center for a 1-0 lead.

Mama, there goes that Manny. pic.twitter.com/eqXpvJOmta

Later in the inning with one runner on, Cody Bellinger jumped on the first pitch and bombed a ball to right that was seemingly gone, but fell just short at the warning track. Yup.

That may have spooked Craig Counsell a bit, as Brandon Woodruff entered in the 3rd and got a 1-2-3 inning. However, that would hardly be his biggest contribution, as after a scoreless 2nd from Kershaw, Woodruff led off the 3rd with a homer to right-center to tie the game 1-1. Yes, you read that correctly.

Things didn’t get any better from there, as Cain followed with a single and Yelich drew a walk. After a foul out, Grandal gave up another passed ball to advance both runners. Then Jesus Aguilar appeared to line out on a great play made by David Freese. However, Grandal was called for catcher’s interference, which loaded the bases.

Could argue Grandal saved two runs there if you assume taking out the contact means the ball's hit slightly more to Freese's left, but yeah, not the best of games behind the plate.

Hernan Perez followed with a sac fly to center, giving the Brewers the 2-1 lead, and while there wasn’t a play at the plate, almost hilariously Grandal had the throw to home bounce off his glove to advance the two runners again. Kershaw got out of the jam, but what an embarrassment that inning was.

Woodruff continued in the 4th against the Dodgers and also continued his magical game by striking out the side. Meanwhile, things did not get better for Kershaw in his half of the 4th, as he allowed a walk and then a single which was promptly booted by Chris Taylor in left to advance both runners a base. Kershaw then surrendered another single, this one to pinch-hitter Domingo Santana, which plated two more to make it 4-1 and knocked him out of the game.

Kershaw wasn’t helped by his defense, but at the end of the day, he allowed six hits and two walks, laboring through 74 pitches in three-plus innings. He ended up surrendering five runs, four of which were earned.

Ryan Madson entered in relief, looking to prevent further damage. While he got three of the four threats at the top of the Brewers lineup, Ryan Braun managed to sneak a single to right to make it 5-1, a run charged to Kershaw.

That brought in Josh Hader from the pen, and he went a massive three scoreless innings, only surrendering a pair of singles.

On the other end, Dylan Floro gave up a walk and a single in the 5th but didn’t surrender a run, and Pedro Baez struck out the side in a scoreless 6th despite giving up a double. That led to surprise NLCS roster addition Julio Urias entering in the 7th. Well, he was promptly greeted with a homer by Aguilar to make it 6-1, and while he also gave up a single he didn’t allow anything more.

That’s where things got a bit messy for the Brewers. Xavier Cedeno entered and gave up a single but did get an out. He was removed for Joakim Soria, who struggled, giving up a single, getting a gift of a strikeout against Justin Turner, and then issuing a walk to load the bases.

This is so bad, lol. pic.twitter.com/S3ukp1C6zA

That was it for Soria, as Jeremy Jeffress was summoned from the pen. He immediately gave up back to-back singles to Machado and Matt Kemp, which plated three runs and cut the lead to 6-4.

We got a game on our hands. #NLCS pic.twitter.com/vC6SmbJN8B

Yasiel Puig then pinch-hit for the pitcher representing the go-ahead run, but struck out with a feeble swing on a 2-2 count to end the threat.

With the game now close, Kenta Maeda was summoned out of the pen to get the 8th. He got a gift of a strikeout to start and then JT made an error to allow a runner to reach, but Kenta got a double play to end things.

That left the Dodgers with a two-run hill to climb in the 9th, and they’d have to do it against Corey Knebel. With two down, Joc Pederson drew a walk and Chris Taylor immediately followed by smashing a triple off Cain’s glove in center to make it a one-run game at 6-5.

Unfortunately, Justin Turner then lost his battle against the high fastball and struck out for the fourth time in the game to end it.

No moral victories, but making their pen work this hard could pay dividends eventually.

The Dodgers have fallen behind the Brewers in the NLCS by dropping Game 1, which seems significant since they have not won a playoff series after losing a Game 1 since the NLCS way back in 1988. I guess that could either be seen as appropriate or damning depending on the eventual outcome of this series, but either way this result is … uh, less than ideal.

Now the Dodgers will have to get back on their horse tomorrow at 10:09 AM HST/1:09 PM PST/4:09 PM EST, as they’ll send (ace) Hyun-Jin Ryu to the mound to take on Wade Miley. The Boys In Blue need to get this one real bad considering the Brewers just had their pen throw seven taxing innings.