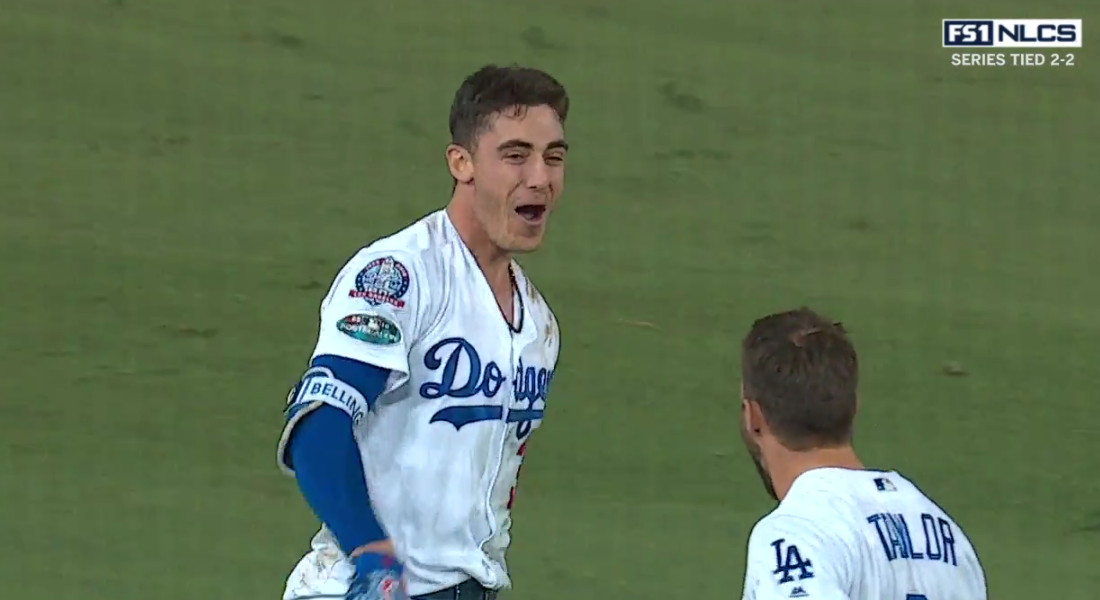 The Dodgers were faced with what essentially amounted to a must-win in Game 4 of the NLCS against the Brewers, and they tasked veteran Rich Hill to get them back even in the series. After an extremely long and frustrating game, Cody Bellinger played hero by walking it off after 13 innings in a 2-1 win.

The bats of the Dodgers got the scoring started in the 1st against Gio Gonzalez. Chris Taylor drew a walk and advanced to second on a ground out. David Freese then got hit to put two runners on, but Manny Machado fouled out. Thankfully, Brian Dozier saved the day with a clean single to left that plated a run to make it 1-0.

Of course, that still left two on with two out, but Enrique Hernandez couldn’t take advantage and flew out routinely to right. That would unfortunately be the start of a trend.

In the 2nd, Yasiel Puig started things with a comebacker to the pitcher, but it deflected off his glove for an infield single. As Gio was chasing the ball, he landed awkwardly on the mound and seemed to twist his left ankle. 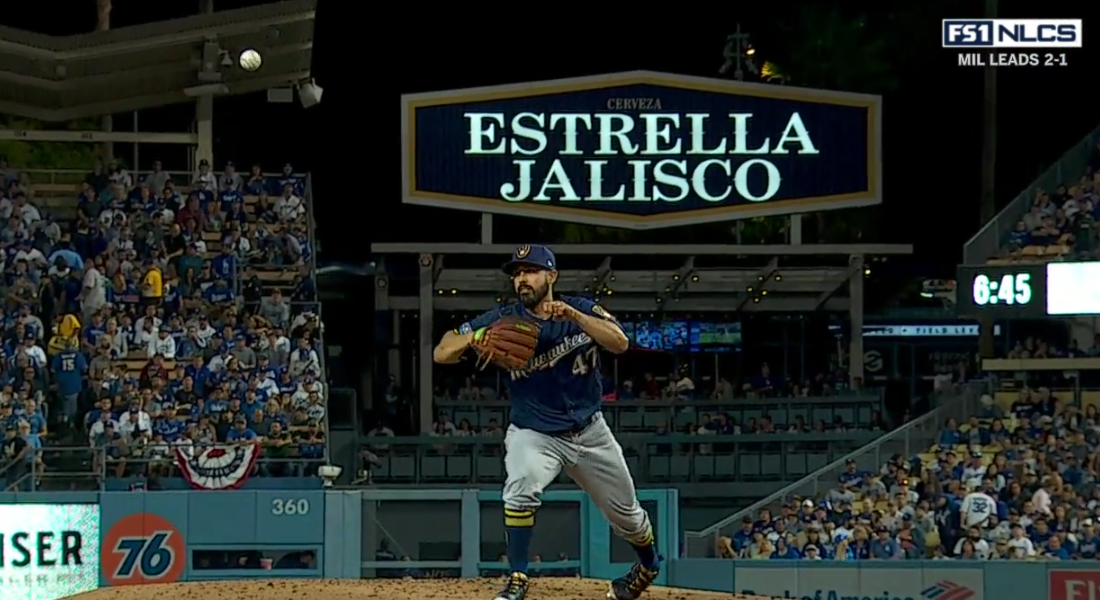 Gio threw just one more pitch before being removed for Freddy Peralta, who immediately issued a walk to Austin Barnes. Hill then attempted to lay a bunt down, but it was right back to the pitcher and the force play was made at third. CT3 then struck out, but Justin Turner followed with a walk to load the bases. That led to Max Muncy being used to pinch-hitter for Freese, but he struck out looking at a decent fastball to hit to end the threat.

Starting Freese over Muncy against a lefty is fine, in general, but when you know it's a pen game, it definitely seems like a waste.

Things didn’t change much in the 3rd either, unfortunately. Dozier drew a one-out walk and then stole second, but was stranded there after both Enrique and Puig were caught looking to end the inning.

I'm disappointed at the eventual result, but I don't know why at this point.

Meanwhile, on the other side of things, Hill wasn’t exactly sharp. That said, despite control issues, he did get through four scoreless innings to start. In the 5th, an Orlando Arcia single up the middle led to Domingo Santana pinch hitting for Peralta, and he did his job by slicing a double into the right-center field gap to tie the game at 1-1. Dick Mountain was not pleased.

Hill was done after five frames and 71 pitches, but he definitely did his job, limiting the Brewers to just the one run on three hits and three walks. Hill also struck out six, so his stuff was definitely on point as well.

Corbin Burnes relieved Peralta and faced the minimum in the 5th and 6th, as though he hit Dozier, he was later erased attempting to steal second. Joakim Soria was tasked with the 7th for the Brewers, and while he allowed a lead-off single, he then retired the next three batters without much drama. That led to Josh Hader entering the game, and he gave up two singles that bookended two outs to put runners on the corners for Matt Kemp, but he couldn’t come through either as he struck out. Corey Knebel took over in the 9th, and while he issued a walk he didn’t give up anything else in his scoreless frame. 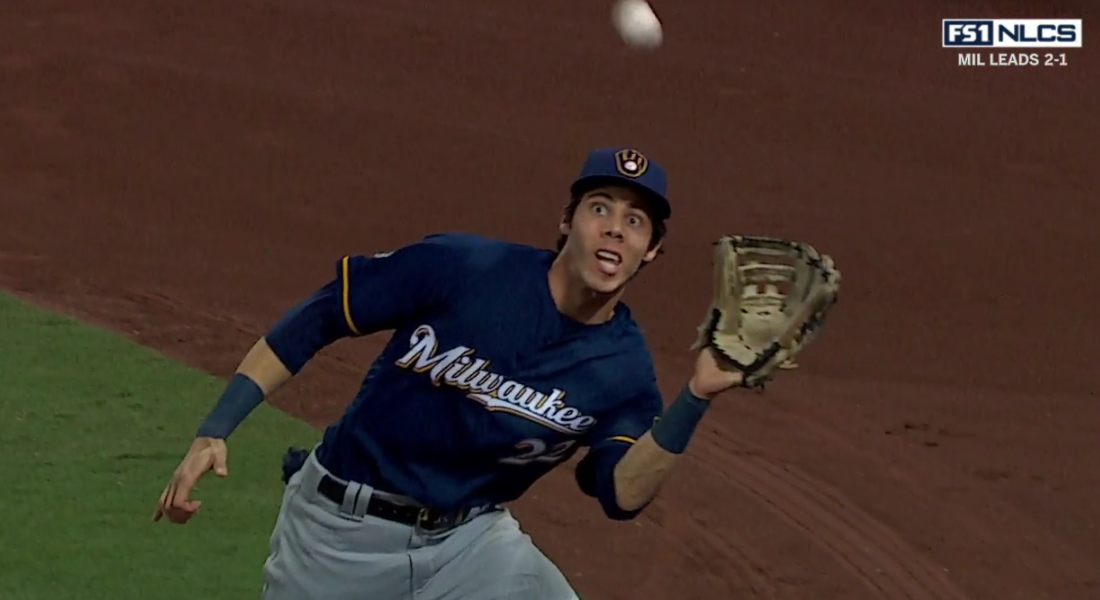 On the pen for the other side, Pedro Baez got the 6th in relief of Hill and while he allowed a single, he also got a infield pop and two strikeouts for a scoreless frame. The 7th proved to be a bit of a mess for the Dodgers, as Kenta Maeda started by surrendering a double to Manny Pina, and it took a diving catch on a bloop over short to prevent true disaster. After Curtis Granderson was announced as a pinch hitter, Caleb Ferguson replaced Maeda, and sorta did his job by inducing a deep fly out to center that moved the runner to third. That was it for Caleb, as Ryan Madson replaced him and needed just two pitches to induce a routine grounder to second to get out of the jam.

Madson continued on in the 8th, as him and Baez are basically leading the pen now, and he allowed just an infield single in a scoreless inning that included a strikeout. Kenley Jansen was tasked with the 9th, and while he issued a walk he also got two ground outs and a strikeout to maintain the tie. Kenley continued on in extras, getting perhaps a game-saving catch in right by Bellinger to start. He then got a pop out, allowed a single and a stolen base, but squashed the threat with a strikeout to end the 10th.

Alex Wood was next in line, and hilariously he was the one who got an easy 1-2-3 inning in the 11th despite his struggles in relief to this point. Dylan Floro was next up in the 12th, and he induced a ground out and got two strikeouts for a 1-2-3 frame of his own. That brought in Julio Urias, the last man in the pen and a surprise addition to the NLCS roster, and he ended up allowing just a single in what proved to be a pivotal scoreless inning.

Meanwhile, Junior Guerra entered and mowed down nine batters in a row to get the 10th through 12th innings. Just way too easy. After the Dodgers made it 10 in a row to start the 13th, they finally got a baserunner thanks to a Machado single, and eventually had him move into scoring position at second with two outs after a wild pitch. That set the stage for Bellinger, who ripped a 3-2 cruve past a diving Jesus Aguilar to walk it off.

JT seemed to enjoy it.

The controversy of the game was Manny purposefully dragging his foot to make contact with Aguilar’s foot, and it sure as hell looked like intent to injure. Definitely can’t blame the Brewers for being pissed or anybody for calling him out. Just fucking dirty, man.

That said … uh, this also happened in the exchange that followed.

Aguilar does call Machado a 'maricón' twice in the exchange, so I'm guessing they'd both rather not have MLB scrutinize this. https://t.co/8IIfck5bku

By some miracle, the series is knotted at 2-2, and the Dodgers will essentially play a three-game series against the Brewers for the right to head to the World Series. Clayton Kershaw will face Wade Miley (going on short rest) in Game 5 tomorrow at 11:05 AM HST/2:05 PM PST/5:05 PM EST.