The Yasmani Grandal situation has come to a head 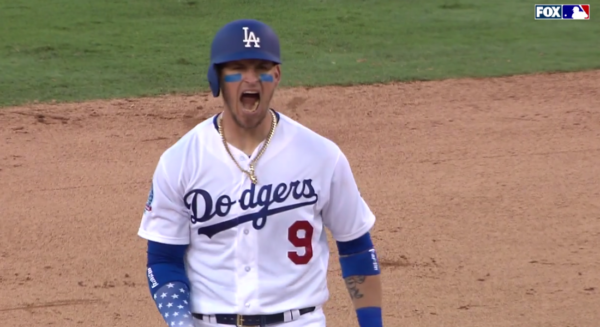 Yasmani Grandal is a big reason why the Dodgers won the National League West this year. Among catchers with at least 400 plate appearances, Grandal posted the third-highest wRC+. Baseball Prospectus, the only of the major stat sites to include catcher framing in its WAR, rated Grandal at 5.6 wins above replacement this year (FanGraphs, which doesn’t include framing, rated him at 3.6). In a season with the slimmest of margins, replacing Grandal’s performance with a full year of what Austin Barnes did would have been more than enough to cost the Dodgers the division.

However, that makes what has happened over the last few days all the more frustrating. Grandal has been responsible for three passed balls and two errors in his 18 innings behind the plate. With the bat, he has two hits in nine plate appearances. He has struck out five times, most of which came with runners on base. He also hit into a key double play.

Poor performance with the bat in the playoffs has been a trend for Grandal. In 83 plate appearances in the last four postseasons with the Dodgers, he is hitting .103/.256/.206. According to The Baseball Gauge, Grandal’s struggles with the bat have cost the Dodgers about a 16% chance at winning the World Series in that span. Grandal’s Championship Win Probability Added during this postseason is the lowest among any Dodger (-6.6%), and it does not include his struggles with the glove.

One of Grandal’s trademark hot streaks coming in October could have carried the Dodgers to the top in any given postseason, which makes it all the more frustrating that this is what the team has received instead. Grandal has made some positive contributions with the bat and glove this postseason as well (including catching a runner stealing yesterday and very narrowly missing another in Game 1) but they have been drowned out by the rest of his performance.

That is why, unfortunately, it is not surprising that fans booed Grandal yesterday, despite his excellent contributions in the regular season over the last four years. Grandal’s response after the game was not exactly what you want to hear, either:

Yasmani Grandal: “I think it’s driving you guys more nuts than it’s driving me. I blocked eight balls, and the one ball kicks off the plate, still hits me in a good spot.”

This quote was circulating on Twitter in a version which did not include the second sentence, which does make it a bit more understandable. It’s also hard to say anything in this situation that would make everybody happy. Still, it doesn’t seem like he wants to own what happened. A quote like this is probably close to the worst thing he could have said, and will only serve to drive fan frustration further.

Dave Roberts has responded to Grandal’s failures — fundamentals, yips, or something in between — by stating that Barnes will start in Game 4. This is the correct call, but it’s not a fix-all. Grandal’s failures in this series provide a convenient scapegoat for the Dodgers’ generally awful performance, but it’s not the only reason why the Dodgers find themselves down 2-1.

Clayton Kershaw faced 18 batters, retired nine of them, allowed six hits and two walks, and one reached on Grandal’s catcher’s interference. He had to deal with Grandal (and Chris Taylor overrunning a ball) but the damage was significantly worsened by batters continuing to reach base. When Kershaw needed a strikeout, the Brewers were able to foul balls off and force him into the zone, where he was making mistakes. The Brewers crushed those mistakes. Kershaw’s start against the Braves was so dominant because he was able to exploit their approach at the plate. His start against the Brewers was so awful because they were able to exploit his approach on the mound.

On offense, Enrique Hernandez is 0-for-the-series. When you combine his performance with the NLDS, he is hitting .111/.304/.278 in 23 plate appearances this postseason. Cody Bellinger has been doing even worse, with a .048/.200/.048 batting line in 25 plate appearances. Yasiel Puig hit well in the NLDS, but has been quiet in the NLCS (though his long strikeout in Game 2 did serve to set up Justin Turner‘s home run later in the game).

Roberts has had a pretty good series all things considered, but even he should shoulder some of the blame. His most egregious decision so far was letting Walker Buehler hit in the bottom of the fifth last night, with the Dodgers down 1-0 and a runner on second with one out. With Josh Hader looming and the number of outs remaining becoming an incredibly important currency, Roberts sent Buehler to the plate. The Dodgers did not have any left-handed hitters available to take a shot against the right-handed Chacin, and their right-handed bench options are not great. However, giving up an out in their best look at the game that late was probably the worst thing Roberts has done in this series. Buehler went on to allow three runs in his third trip through the order.

Simply put, the Dodgers are down 2-1 in the NLCS because they are playing extremely poor baseball. Grandal is/was a huge part of that, but he isn’t the only part. A 2-1 series deficit is far from insurmountable, but if the team doesn’t get their shit together, it’s growing increasingly difficult to see them playing baseball next week.