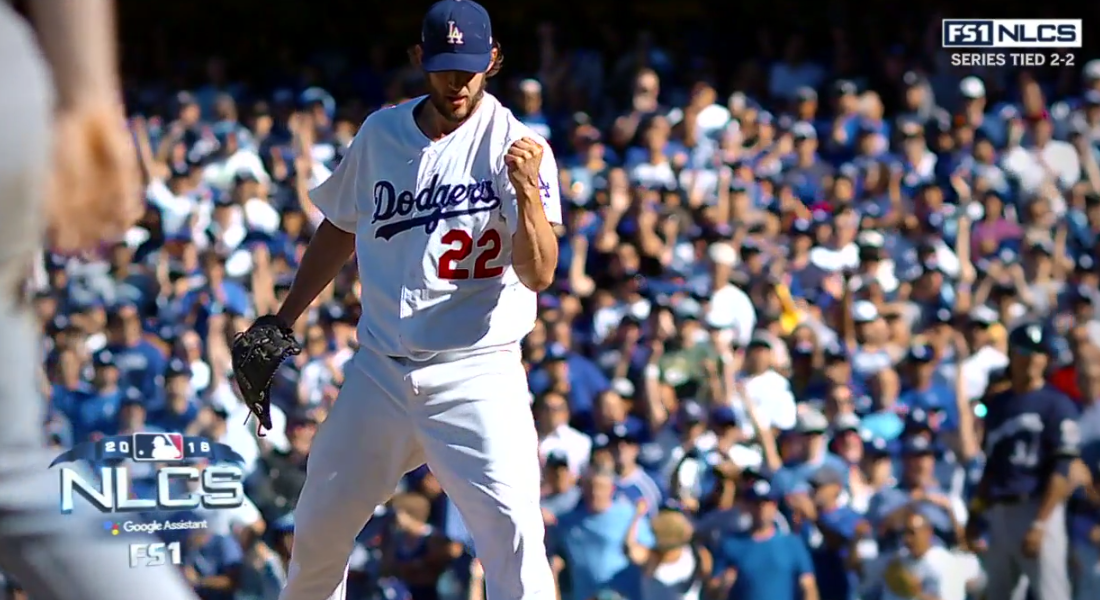 After somehow managing to pull out a win in last night’s grueling 13-inning Game 4 affair to even the series, the Dodgers looked to take a significant step towards a return trip to the World Series in Game 5 of the NLCS against the Brewers. And they got exactly that thanks to the bats finally scratching together some offense thanks to some timely hitting and Clayton Kershaw turning in one of his best postseason starts in a 5-2 victory.

Kershaw took the ball for the Dodgers and was looking for redemption after he had a bit of a disaster in Game 1 of the series. He faced the minimum in the first two innings, as while he allowed a single to start it was erased thanks to Austin Barnes throwing the runner out on a stolen base attempt.

The 3rd ended up being a problem inning, as Orlando Arcia came up with a one-out single, and even though pitcher Brandon Woodruff was trying to bunt, Kershaw issued a free pass to him to start the trouble. Lorenzo Cain followed by smoking a line drive to center the one-hopped the wall for a double and a 1-0 lead for the Brewers. Thankfully Clayton managed to limit the damage, as he struck out Christian Yelich and issued a walk to Ryan Braun to load the bases, but then rebounded with a strikeout of Jesus Aguilar to escape disaster. Worth noting that he also got help from Barnes behind the plate in terms of blocking pitches to prevent runs as well.

To say Kershaw settled down from there would be an understatement, as he posted four 1-2-3 innings in a row, retiring the last 13 batters he faced. In the end, he went seven generally dominant innings in 98 pitches, surrendering just the one run on three hits and two walks. Perhaps the most surprising thing, however, was that he struck out nine batters.

Credit where it’s due here, as though he’s received criticism for being inconsistent in the postseason, he deserves praise for stellar outings like these. 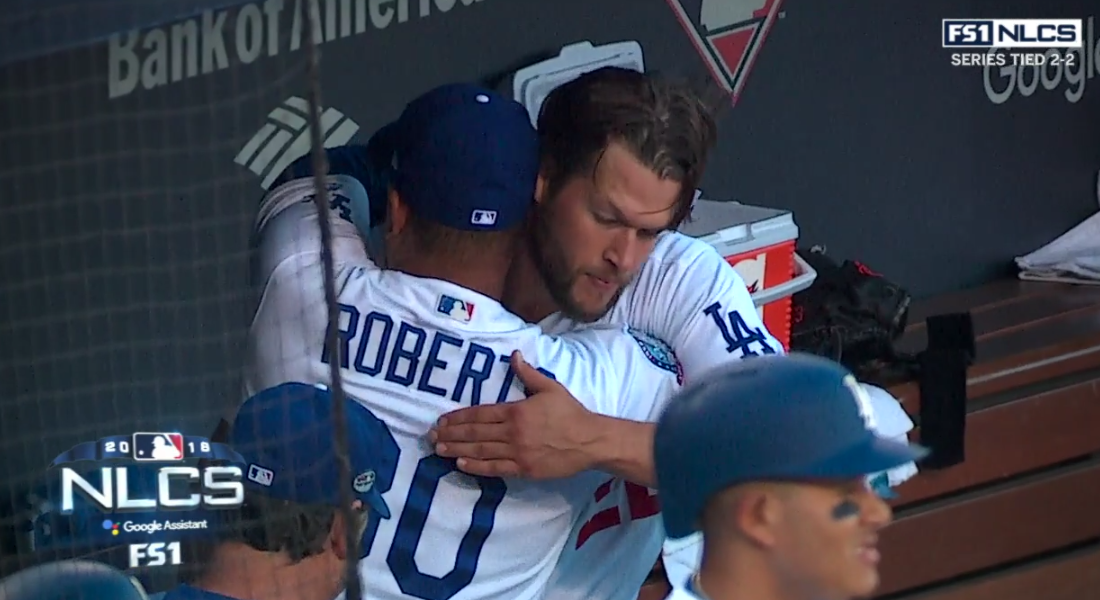 Things were wild in a hurry on the other side.

Wade Miley started the game, but was removed after issuing a walk to Cody Bellinger, throwing just five pitches as Craig Counsell took the opener to a whole new level. In hindsight, the move made the rather bizarre lineup Dave Roberts ran out sorta make sense.

Woodruff took over, and though he hit Justin Turner to put two on with nobody out, he then rebounded with a strikeout of David Freese and got Manny Machado to ground into a double play. Woodruff then cruised through the next three innings, not only keeping the Dodgers off the scoreboard but limiting them to just a walk and a single.

The 5th inning immediately proved problematic, however, as Chris Taylor led things off with an infield single and ended up advancing to second on a throwing error by shortstop Arcia. CT3 immediately took advantage and swiped third base to setup a prime scoring opportunity, even if the bottom of the order was due up. Unfortunately, Enrique Hernandez struck out and things were looking bleak, but Barnes made all the worry for nothing as he came through with a single right back up the box to tie the game at 1-1.

Most importantly, that hit meant Yasiel Puig went back to the dugout and Kershaw was allowed to stay in, and he laid down a bunt to advance Barnes to second. The offense is still the offense, though, and Bellinger struck out to end the threat.

Woodruff was still going in the 6th, though he did run into trouble immediately as Turner singled and he hit Machado with a pitch to put two on with one out. Max Muncy followed by going the other way with a backdoor slider, giving the Dodgers a 2-1 lead and knocking Woodruff out of the game.

Corbin Burnes followed next, and he got CT3 to strikeout, but Puig now did actually pinch-hit and he came through with a lined single to center to provide insurance and make it 3-1 (Muncy also had a TOOTBLAN and almost blew up his ankle). Puig had an amazing sequence.

Everybody who dislikes Puig doing this just fucking sucks, honestly. 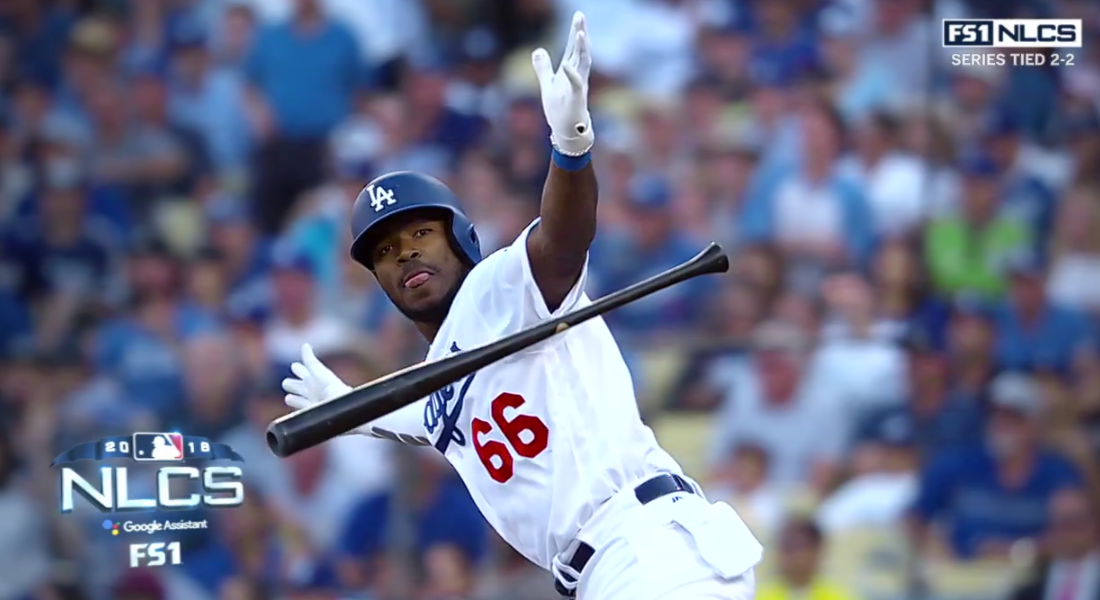 Joakim Soria took over for the Brewers in the 7th, and thankfully he didn’t seem to have it. With one out, he walked Kershaw and then gave up a double to Bellinger, giving the Dodgers a prime scoring chance. This time they took advantage thanks to JT singling up the middle to add insurance and up the lead to 4-1.

Xavier Cedeno then entered in relief, and while pinch-hitter Brian Dozier didn’t exactly kill the ball, his topper to third was enough to bring home another run and make it 5-1.

Cedeno then intentionally walked Machado, who then technically stole second but it was basically defensive indifference. Unfortunately, Muncy couldn’t take advantage and struck out to end the threat.

Back to Dodgers on the mound, due to the four-run lead the offense provided, Kershaw was out of the game despite being allowed to hit in the previous inning. Pedro Baez entered in relief and cruised through a 1-2-3 frame that included a strikeout. Not even surprised at this point.

Zach Davies, the Brewers addition to the NLCS roster after Gio Gonzalez was removed with an ankle sprain, entered for the 9th and got a scoreless inning. However, not before Puig got a one-out hustle double and then seemingly stole third (it was called back on a … dubious batter’s interference call). Barnes struck out and Matt Kemp grounded out to end the scoring chance, but boy was it fun.

To close things out, Caleb Ferguson started the 9th and got a ground out, but that was the end of his day even with a four-run lead because … okay. Ryan Madson was then called upon to finish the job, and while he got the second out on one pitch, he then gave up back-to-back doubles to make it 5-2.

That required Kenley Jansen to be summoned since I guess it was a save chance, and he ended it in just four pitches with a strikeout.

The Dodgers are now up 3-2 in the NLCS on the Brewers and are on the brink of the World Series, just needing to take one of the two remaining games to give themselves a chance at a repeat trip to the Fall Classic and a chance to secure their first World Series in 30 years.

After a day off tomorrow, the Dodgers will travel to Milwaukee for Game 6 of the NLCS at 2:39 PM HST/5:39 PM PST/8:39 PM EST, and they’ll be sending Hyun-Jin Ryu to the mound against Miley.